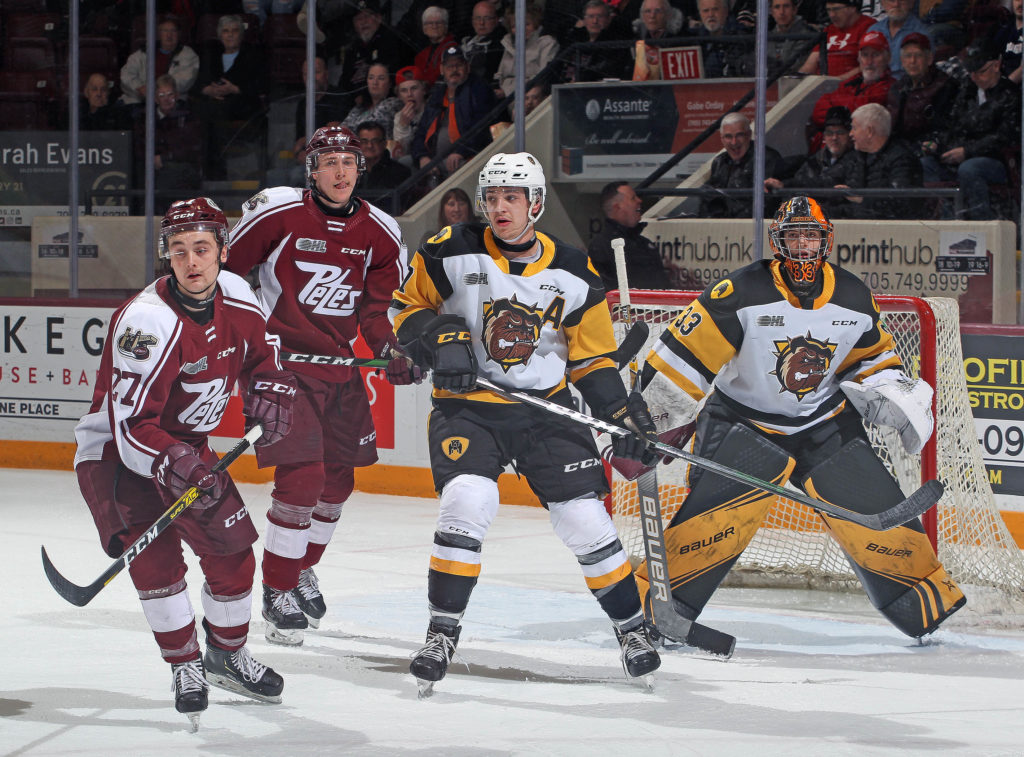 Peterborough’s game plan worked out when they applied pressure early in the game in enemy territory. Peterborough native J.R. Avon wired the puck past Marco Costantini for a 1-0 lead. Brady Hinz picked up the lone assist in Avon’s fourth goal of the season which was 2:55 into the game.

J.R.! @Avonjr_1010 with a slick move in the slot to open up a lane and beat Costantini! @BradyHinz assists. 1-0 Petes!#GoPetesGo pic.twitter.com/UZLFTKdnvV

Moments later, Bulldogs captain Isaac Nurse snuck away on a breakaway and Winnipeg Jets prospect Declan Chisholm desperately tried to take him out of play which resulted in a penalty shot. Jones stood tall and kept the puck out of the net to protect the 1-0 lead.

The Petes’ biggest offensive threat, Nick Robertson, hopped over the boards and received Der-Arguchintsev’s pass after helping out defensively. Robertson made no mistake, eyed his target and wired the puck deep in the net for his league leading 51st goal of the season. Der-Arguchintsev and Paquette picked up the helpers on the 2-0 goal.

Peterborough decided that two goals weren’t enough and continued to pressure the Bulldogs resulting a forced turnover by Gallant. Team Canada World Junior Gold Medal hero Akil Thomas pick up the loose puck and sent the puck past Costantini for a 3-0 lead.

KILLER! @AkilThomas2 picks up the puck and then far corner to make it 3-0 Petes!#GoPetesGo | #GoKingsGopic.twitter.com/gQgnWIs0hB

Avon, Robertson and Thomas sent off the goal three times in the opening 20 minutes while Jones stood tall even though the Petes were getting out shot 16-15.

Minutes into the second period, Jake Gravelle was whistled for hooking and the Petes fifth ranked power play unit converted on the man advantage. A point shot from Chisholm resulted in a scramble in front of Costantini and it was Hinz who found the loose puck and banged it past the goal line for a 4-0 lead. Gallant and Chisholm picked up the assists on the play.

As the clock was ticking down to the end of the second period, a successful zone breakout beginning with a pass from Chisholm to McMullen who then completed a tape to tape pass to Hinz. Hinz generated speed with the puck, entered the attacking zone and shot the puck on goal. Hinz stayed with the play and picked up his own rebound and scored his second of the night. Chisholm picked up his second assist of the night and McMullen assisted on Hinz’s 14th goal of the night.

Peterborough found the back of the net twice in the second period to extend their lead to a comfortable 5-0 lead after 40 minutes of hockey.

A power play opportunity presented itself for Peterborough when Navrin Mutter was whistled for elbowing, halfway through the third. After passing the puck around and getting set up, Liam Kirk’s wrist shot found the back of the net to extend the lead 6-0. Chisholm picked up his third assist of the night on Kirk’s 21st of the season.

REYT GOAL KIRKY 🇬🇧 Another PP marker for the Petes as @kirky_1424 snaps home his 21st of the season! @chis_decs gets his third apple of the night. 6-0 Petes!#GoPetesGo | #Yotes pic.twitter.com/2stBHOo8fz

With minutes remaining in the game, Der-Arguchintsev received a Max Grondin pass and just after he entered the zone, he roofed the puck blocker side for his ninth goal of the season and to give the Petes a 7-0 lead.

SEM! @semder009 adds lucky number 7⃣ for the Maroon and White, and his 9th of the season! @hudson_wilson18 and @chis_decs earn the apples.#GoPetesGo | #LeafsForever pic.twitter.com/o9BhUY2AMl

Peterborough decided to add another goal before the game’s final buzzer when Kirk made a cross ice pass on a two on one and Gallant made no mistake and sounded the Petes goal horn for the eighth and last time of the night. Jack York picked up the secondary assist on the play.

With an 8-0 victory, the Petes took the season series 5 games to 2 and could potentially play the Bulldogs in the first round of the playoffs. The shutout was Jones’ fourth of the season and seventh of his career.

Finals shots were 43-41 in favour of Peterborough. Hinz, Jones, and Chisholm were named the game’s First Choice Haircutters first, second, and third stars of the game, respectively. The Mark’s Hardest Working Pete was Shawn Spearing.

The Peterborough Petes take on the Mississauga Steelheads inside the square corners on Saturday, March 7 at 7:05 PM before travelling to the Meridian Centre on Sunday, March 8 for a 2:00 pm matinee tilt against the Niagara IceDogs.