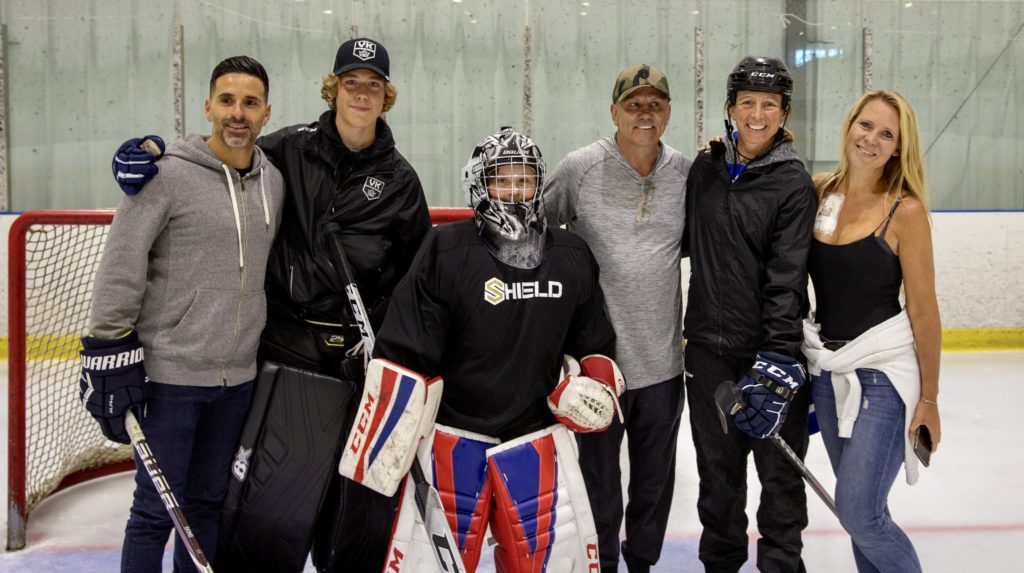 With the province heading in the right direction and arenas opening back up, Mikael Kingo is thankful to be getting back into a routine of being on the ice every day as he prepares for his next hockey season. Although COVID-19 threw a wrench in his initial summer training among other plans, one aspect of his life off the ice he was able to stay focused on was his charitable work.

The Petes goaltending prospect, who was selected by the Maroon and White in the 10th round, 195th overall in the 2020 OHL Priority Selection, has long been motivated by his philanthropic family; he credits his mother with instilling his sense of giving and his philosophy of giving more than you take. It is this motivation and philosophy that deservedly earned him the 2020 Roy Pejcinovski Memorial Goaltending Character Award.

“It’s nice to be remembered as someone who helps out in the community, and hopefully, is also good stopping the puck.”

The Greater Toronto Hockey League (GTHL) put out a call for nominations for “a goaltender who has demonstrated extraordinary service in the community while modeling the basic traits of good character: trustworthiness, respect, responsibility, fairness, caring citizenship to represent the GTHL”. The Award was established in 2018 in memory of late Don Mills Flyers goaltender Roy Pejcinovski.

Kingo was aware that a friend’s mother had nominated him for the award, which he saw as an honour in itself.

“I knew that I had been nominated for the award, but I’ve just been doing what I think everyone else should – make the world a better place,” Kingo said.

Kingo’s charitable efforts are many, both as an individual and as part of The Angel Project – a non-profit founded by his mother, Lisette, in 2008. The organization raises funds for patients in complex care for things like outings and the purchase of items such as wheelchairs, voice boxes, speech computers, and items for basic needs and comforts. He assists the organization in many ways, including helping to organize and run an annual hockey tournament that each year raises thousands of dollars.

Last year Kingo instituted a tradition of giving away goalie pads to a deserving young netminder in recognition of his birthday.

“I know how expensive goalie equipment can be; for my first set of goalie pads I saved up every penny and bought my own set on Kijiji,” he explained in a video in May. “I know how much passion people have to be a goaltender, so we’re going to give away some goalie pads to someone who may not be able to afford it or just went through a tough time around the rink.”

It’s time! Second annual goalie surprise giveaway. I have everything I need. I work and save $ so for my birthday I can buy new pads for a deserving goalie. Coaches, trainers send me a dm with your nomination of a deserving goalie. https://t.co/e1g7wpI3Bz last years video link pic.twitter.com/Cp41fKmxcR

These initiatives and more are what deservedly earned him the award.

“I was brought up to give more than you take and to make the world a better place, so it truly means a lot to receive the award, especially knowing the background of it,” Kingo added. “I got to speak with Roy’s father which was tough but it was very nice to speak to him. He’s a very nice man that is very involved in the hockey community.”

This isn’t the first time that Kingo has been acknowledged for his altruistic character. He was recognized last year by Scotiabank Hockey Club and the NHL as a community leader, providing him the opportunity to meet and play video games with Toronto Maple Leafs star Auston Matthews. He’s also been featured by The Hockey News, and has received awards from the Vaughan Kings organization.

The #NHLGWC European Regional went down today so let’s check out a little NHL19. @scotiahockey & their teammates keep going above & beyond to support those who make a difference in their community. pic.twitter.com/QxEvXRScOu

The 2004-born netminder has quite the following on social media, allowing him to further amplify the projects he’s working on.

“I believe I have a prevalent voice and that I should use that voice to help better the world around me and contribute to the community,” he explained. “If I have a large following, I can get them to see the work that’s being done and how they can help, too.”

While Kingo continues the hard work off the ice, he’s also getting ready for next season whenever it gets underway. Regardless of what happens in the coming months, the Petes are proud to have someone with his character as part of the family.