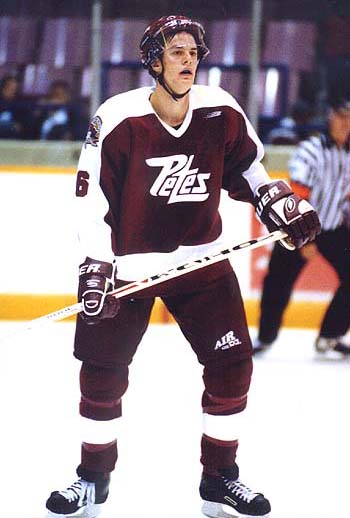 The Peterborough Petes have named OHL and NHL veteran Kurtis Foster an Assistant Coach. Foster will join the Petes’ coaching staff this summer in preparation for the 2016/17 season, and will work with players during practice and off-ice sessions while serving as the “eye in the sky” during games.

“Kurtis will bring further OHL and pro experience to our coaching staff, and will be an excellent resource for our players and staff,” noted General Manager Mike Oke. “His passion for junior hockey and the Peterborough community will help him have a positive impact with the Petes.”

“I’m very excited for the opportunity to begin my coaching career with the Petes,” exclaimed Foster. “I have always cherished my five seasons player for the Maroon and White, and I love that I can call Peterborough my home.”

The 6’5”, 225lbs defenceman was drafted 40th overall by the Calgary Flames in the 2000 NHL Entry Draft and turned pro after five seasons with the Petes, during which he played 256 games and scored 36 goals, 60 assists, and 96 points. He was awarded the 2003/04 AHL Yannick Dupre award for his community involvement.

“I’m excited to have Kurtis working with myself, assistant coaches Andrew Verner and Jake Grimes, and our players,” added Head Coach Jody Hull. “His dedication to the game and commitment to excellence will serve him well on our coaching staff.”

Petes Training Camp runs from August 30 to September 2, with the first pre-season game to be played on Sunday, September 4 against the Oshawa Generals at 2:05pm, with the annual Season Ticket Holder BBQ immediately following the game.

Join thousands of fans and stay up to date with the Petes by downloading the Peterborough Petes Mobile App powered by Kawartha TV & Stereo, available for iPhone or Android devices.