Learned From Some of the Game’s Smartest Minds: Kyle Raftis 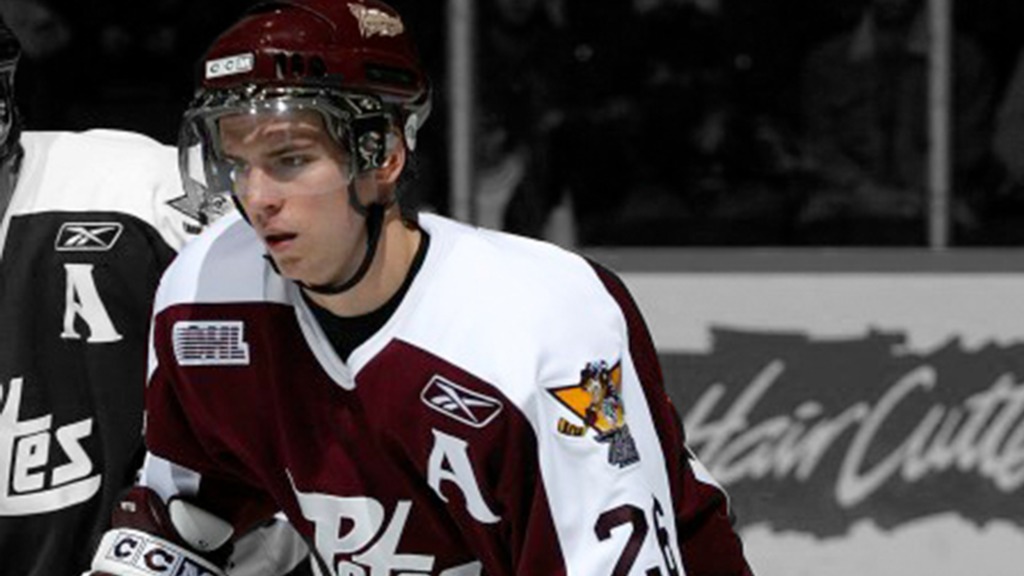 Kyle overlooks the game from the press box surrounded by colleagues who are all engaged with the action on the ice as the players are several dozen feet below them. It’s another Saturday night in the little town of Sault Ste., ON as the Greyhounds are playing in front of a packed house. It’s a place where ‘The Great One’ once played and it’s where Kyle Raftis now stays.

Peterborough Petes alumnus Kyle Raftis is entering his seventh season as General Manager of the Soo Greyhounds. Hired in 2014, the organization was impressed by Raftis’ resume. He helped bring an OHL Championship to Peterborough leading as captain during the 2006-07 season and then spent three years at Dalhousie University where he graduated with a bachelor’s degree in Business Management. Despite moving away, Raftis keeps in touch with former Petes general manager and coach Jeff Twohey.

“[Twohey]’s great. He keeps in touch with everybody. You know as I was trying to work my way back into hockey, on the ice level, [he] was somebody who you could bounce off things and get their opinion of,” Raftis said.

“Even if I wanted to pick up the phone today, I know he’d be there.”

Raftis played one more season of hockey after university before joining the Ontario Hockey League front office as the Director of Recruiting, Education Service and Player Development.

“I hadn’t watched a lot of U16 age group in a long time [because] I went to school… then you come back to [junior hockey]. Then you’re thinking what’s his level going to be like,” Graftis said. “That was a really high end [group] like Robby Fabbri, Jared McCann… obviously Connor [McDavid] was a year younger than them and the hockey was excellent.”

His responsibilities included recruitment strategies, liaising between schools and players, and coordinating OHL development programs throughout Ontario and parts of the U.S. Raftis enjoyed working with every draft class and understands “not many come along” like McDavid.

Big hockey names seem to follow Raftis around. Raftis’ hiring at Sault Ste. Mari coincided with the extension of former head coach Sheldon Keefe, now Toronto Maple Leafs head coach, who coached the Greyhounds from 2012-15. The tandem of Raftis and Keefe appeared to be perfect. The team won 10 more games than the previous season and lost five fewer games in regulation.

Raftis describes Keefe as an “outside-the-box thinker” who can “relate to everyone fairly quickly.”

“We had a really strong team that year [in 2014-15] and I thought Sheldon did an exceptional job of getting everyone on the same page. I was really fortunate to have Sheldon to work alongside because he was a great resource to bounce off things.”

While Keefe would be hired by the Toronto Marlies in the summer of 2015, Raftis remained in Sault Ste. Marie. The Greyhounds took a step back, but returned to their winning ways for the next few years. Raftis built a club for the 2017-18 campaign that won a franchise-record 55 games en route to 116 points. Current Philadelphia Flyers’ Morgan Frost led the team offensively with 42 goals and 70 assists for 112 points in 67 games as a 19-year-old. The second-best team in the OHL was the Hamilton Bulldogs with 43 wins and 93 points. Ironically, the Bulldogs beat Sault Ste. Marie in Game Six of the 2018 Rogers OHL Championship Series.

The Greyhounds’ success year caught the eyes of American Hockey League clubs. With members of the coaching staff taking roles with AHL clubs, vacancies needed to be filled and Raftis looked to a former teammate.

“Our coaching staff got different American League jobs. One was in San Antonio, the other one was in Stockton,” Raftis said. “Just knowing Jamie previously, I knew he would jump into the role pretty quickly and he’s been a great asset for myself and the staff and the players.”

Raftis is excited about the roster for the upcoming season.

“I think this is a year where a young player can take the ball and run with it,” Raftis said.

Raftis and Tardif are familiar with what it takes to win. Along with 25 other young men, they captured Peterborough’s last OHL Championship 15 years ago. Raftis remembers being traded to the Petes as well as how focused the team was on winning.

“I got traded the year before at the trade deadline. There were high expectations. [Peterborough] wasn’t going to be that team that was going to take a step back,” Graftis recalled. “I think we lost in the conference finals that year and it was devastating to a lot of guys.”

“Guys were gelling right away at training camp – we knew we had something special and it was just a matter of staying with it.”

Raftis is building something special in Sault Ste. Marie.