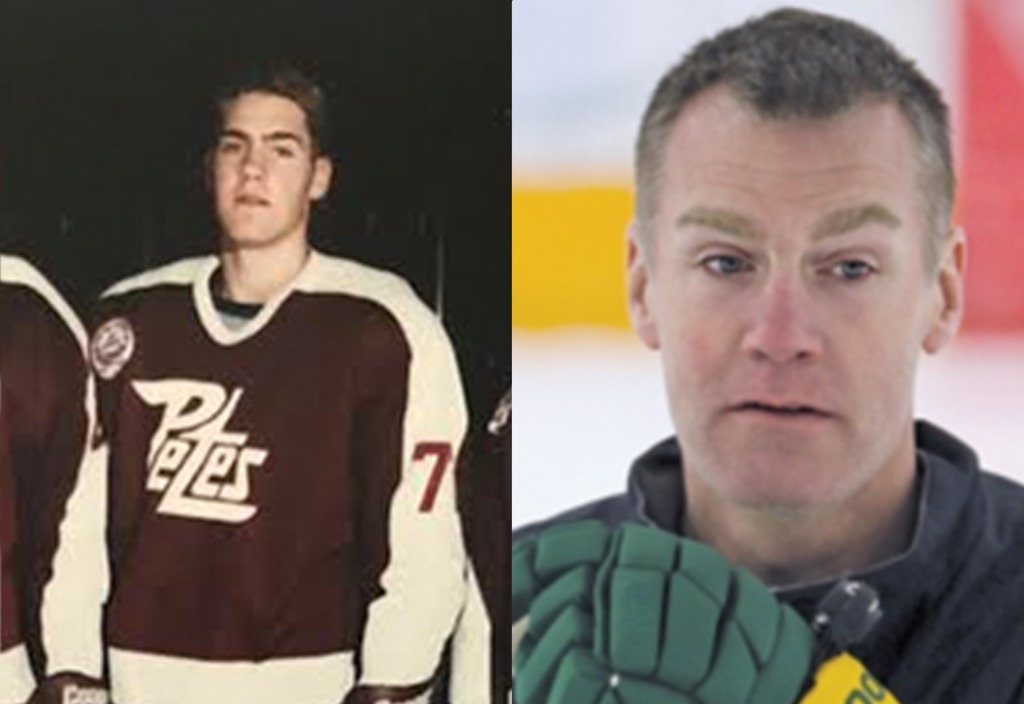 No stranger to the positive byproducts of resiliency is Petes alumnus Scott Barney. The Oshawa native did the unthinkable and returned to hockey after taking a pause for three seasons between 1999-2002 following a gruesome back injury. Now the Head Coach and General Manager of the Humboldt Broncos, Barney faces a new set of challenges as he enters his third season with the SJHL team.

Barney was drafted by the Petes in the 1995 OHL Priority Selection.

“Me and my dad always used to go to the Generals games growing up. I was a big Lindros fan and we loved the rivalry with the Petes. Peterborough has always had such a big tradition so I was excited to get in there.”

The former forward’s rookie season was one for the books as the Petes’ 1995-96 season was marked by a J. Ross Robertson Cup championship, with Peterborough hosting the Memorial Cup and the legendary fog bowl game.

“When you’re a rookie you can’t ask for anything more than winning a championship and I think our motivation was to not to lose out too early. Everybody remembers the fog bowl in the last game, the ice was pretty much melted out of there.”

Barney would spend four seasons cloaked in maroon and white, including one as the team’s captain. Although he was predictably selected by the LA Kings in the 1997 NHL Draft, the towering winger’s path in hockey would take an unusual route to his current point in the Canadian Prairies. 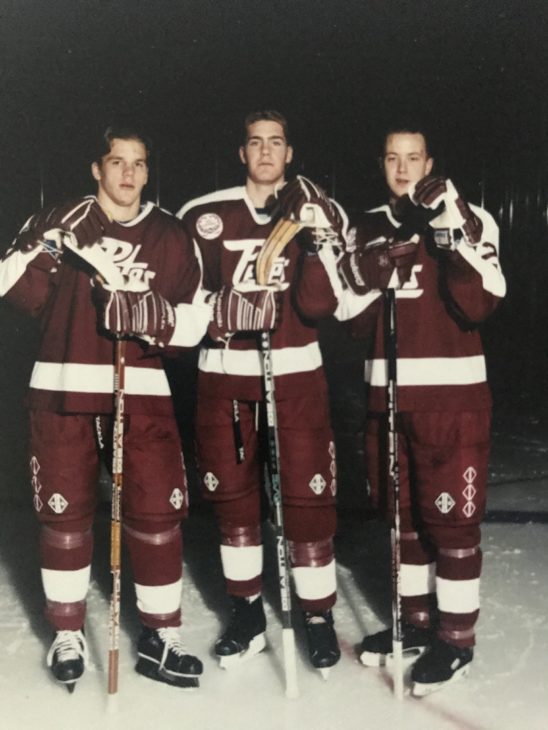 In Barney’s final season with the Petes he recognized abnormal pain in his back that quickly progressed as he moved on in his playing career.

“We lost out in the playoffs and I went down to Springfield in the AHL, one of LA’s affiliates, and played five games there and it kept getting worse and worse.”

Regardless of Barney’s access to top notch doctors in Los Angeles, the discovery that he only had one functioning kidney since birth, a handful of surgeries, and countless cortisone shots, there was no immediate solution to his back problems. The Petes alumnus entered a three year sabbatical from the Kings before he considered stepping back onto the ice in full-time fashion.

“You know, near the end there it started getting better, I think Jody Hull was coaching the Petes and and I talked to him about skating with the Petes and getting back on the ice and he let me do that which was a huge part of my comeback.”

In 2002, Barney did the unimaginable and returned to professional hockey after a three season hiatus. In his initial season back, Barney would play five games in LA and 57 with their AHL affiliate, the Manchester Monarchs. The following season he would again split his time between the Monarchs and Kings, joining the Chicago Wolves in 2005, Grand Rapids Griffins in 2006, and Hershey Bears in 2007.

“It taught me a lot about myself and, you know, the ability to come back from being injured or coming back from a difficult time.”

Barney capped his time playing professional hockey in North America in 2008, and signed a contract with the Augburger Panthers of the German Professional Ice Hockey League. Across a decade he made stops in Finland, Switzerland, Italy, China, and Japan, playing for each country’s top leagues. Barney finished his playing career in 2018, clinching a championship with the Anyang Halla of the ALIH.

Although he retired from playing, Barney didn’t fully hang up the skates as he relocated to the Canadian Prairies in pursuit of more hockey.

“It helped me a lot on the coaching end of it, being able to deal with new situations.”

The former Pete reflects on the impact moving to new cities had on his preparation when he was hired as a new Assistant Coach with the Humboldt Broncos in 2018. It seemed to be the perfect fit, as members in Barney’s circle i 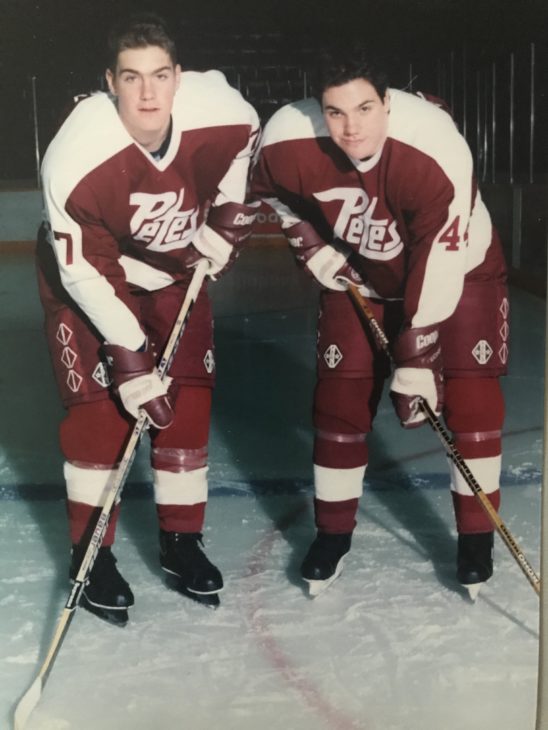 nsisted that he should enter the world of coaching and his family was ready to be back on home soil.

“My mindset was just about getting back home and getting into the workforce and have some normalcy in our life, so I put my name in for that.”

Barney joined the Broncos in the season following the infamous devastating bus accident that stopped the hockey world in it’s tracks. Upon his arrival in Humboldt Barney was prepared to rebuild with the community and work to bring a championship to the city while developing himself as a coach.

“I remember the first day we were running around to all different stores in town to get supplies and tape and all the different little things. You learn a lot, how to deal with the media and outside pressures. It made me grow as a coach and as a person really quickly.”

His role quickly evolved as Barney was promoted to the position of Head Coach in December of his initial season in Humboldt, and then again in February when he cemented his place as the official Head Coach and General Manager of the SJHL team. He admits that following the 2018-19 season the team “started from scratch,” and that the work done by himself and the scouting team would position the Broncos as a contender for a championship next year.

“Once you put your heart in something, you’re all in.”

A typical day for the Oshawa native puts him at the Elgar Petersen Arena at 6:45 AM to analyze video with his coaching staff, followed by a review of the clips with the players at 10:00 AM, then practice at 11:15 AM. In the afternoon he consults the business staff who serve as the liaisons with the Broncos Board of Directors, then home by 5:00 PM, or 11:00 PM on game days.

Barney expresses sincere gratitude for the support of the Humboldt community and for the continuous attendance of their games.

“The population here is just over 5,000 and we probably average just about 1,000 fans a game. I mean you’re getting 20% of people out to the games. It’s a pretty big thing in town.”

He reinforces the team’s appreciation for their fans by getting the players involved with the community as much as possible.

“I enjoy it and hopefully it is preparing me for my next step in major junior.”

The Petes alumnus, though happy in Saskatchewan and appreciative of his position with the Broncos, hopes his time in management and coaching doesn’t end there.

“I’d love to move up in coaching. I would love to finish up what we built here in Humboldt and hey, if I am here for ten years, great.” 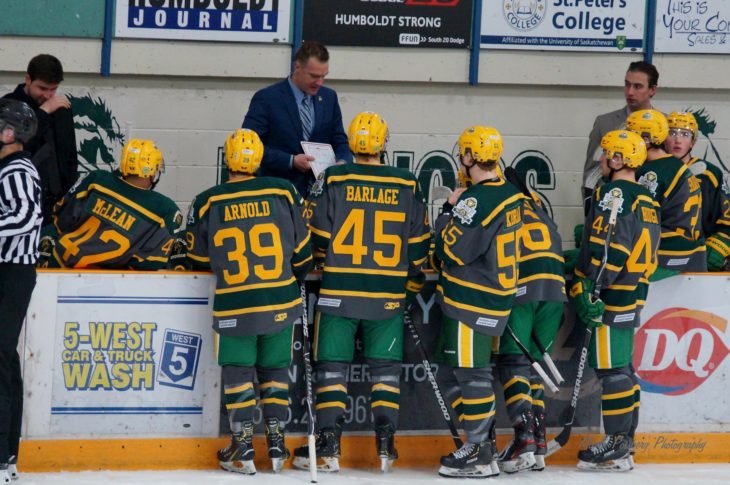 In his personal development Scott leans on the advice from leaders throughout his his career who shaped him into the player he became and person he is today.

“Obviously Jeff Twohey was a huge part of me coming to Peterborough and who I am now. I still stay in touch with Jeff. He’s a great hockey mind and he’s someone you can reach out to and talk to.”

“Andy Murray and Bruce Broudreau were great coaches I had. Just the way they run things on a day to day basis, I take some things off them. If you can take one thing to make you a better coach or a better person, it can hopefully push you in the right direction.”

He, like many coaches young in their career, is learning and shaping his unique style as he is presented with each new challenge. Barney is equipped with a thorough understanding of resiliency, a contact list of strong coaches to lean on, and love for Humboldt, making him and the Broncos a perfect fit and top contenders for a 2021 ANAVET Cup.