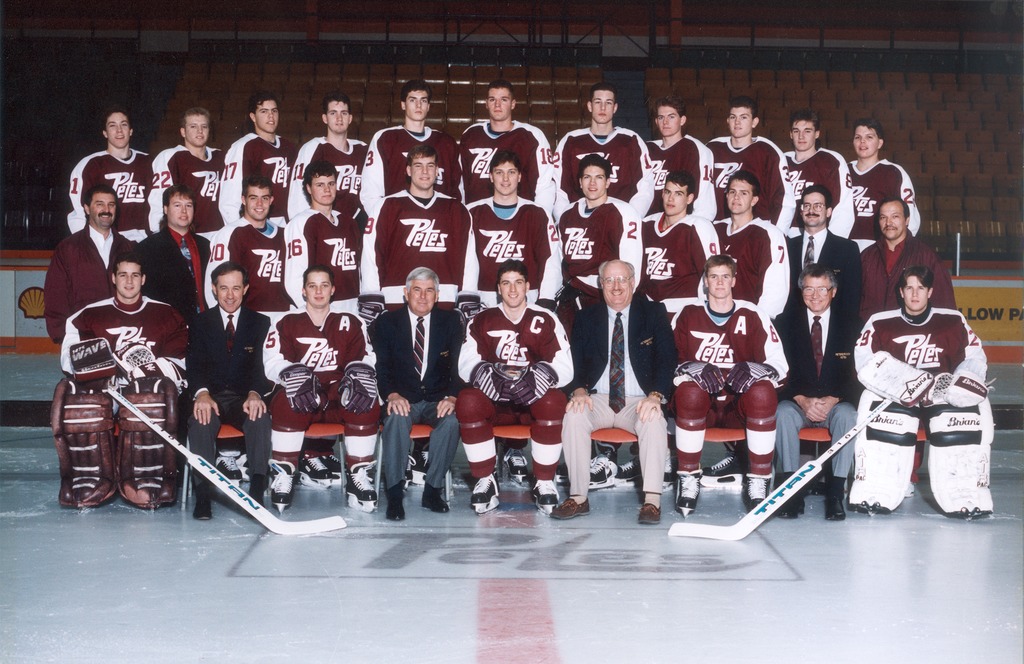 “That team was special,” Jason Dawe, member of the 1992-93 Petes, exclaimed with conviction.

Dawe’s sincerity is justified as the team he describes is statistically one of the most impressive in Petes history. Under the coaching of Dick Todd and Jeff Twohey, the group went on to be to be the top ranked team in the Canadian Hockey League throughout the regular season, producing a 46-15-5 record to clinch the J. Ross Robertson Cup and Hamilton Spectator Trophy.

The maroon and white fell just short of a Memorial Cup to the Sault St. Marie Greyhounds, a team that quickly developed into their rival after facing them 12 times outside the regular season.

The 1992-93 Petes represented a collection of individual successes that were amplified when brought together. The starting forward lineup of Mike Harding, Jason Dawe and Dave Roche put up 362 points that season alone. Roche explained,

Dick probably recognized Mike was a playmaker, a goal scorer nonetheless, those guys could see a lot of things and I could hang out in front of the net. We just read off each other; we just gelled right off the beginning of the summer. I knew where he was going to be, he knew where I was going to be, we could all just see each other on the ice.

Harding. a centre, still maintains the club record for most points in a season with 126 and most career points for a Petes player with 350. He also sits on the list for most goals by a Pete in a single game, after hitting the back of the net five times against the Guelph Storm on October 23, 1993.

“It was a team that had a lot of good players on it. You have a guy like Mike Harding, we took Mike in the fifth round of the OHL draft and he ended up being one of the leading players,” explained then-assistant coach Jeff Twohey.

Harding remains in the Petes record book with familiar company as his line mate, Dawe, holds the record for most career goals as a Pete with 169 and sits in second place after Harding for most career points as a Pete. Also setting records for the Petes from the ‘92 roster was right winger Dale McTavish, who is in third place for most games played by a Pete in the regular season; McTavish dawned the maroon and white 258 times.

Dawe and Harding’s chemistry was also present off the ice as the two billeted together with the Perry family.

“He and I were best buddies, we did everything together,” stated Jason. “Rochey was a big part of that line, he was the type of guy that would go into the corners. It was a great combination the three of us.”

The players’ individual successes went beyond the Memorial Centre, as three members of the ‘92 Petes – Jason Dawe, and defensive duo Brent Tully and Chris Pronger – represented Canada at the 1993 World Junior Championship.

“It was surreal, to get to wear a Canadian jersey its unbelievable,” explains Brent.

The trio earned gold in Sweden and the Petes had the largest presence on the WJC Canadian roster.

In reflecting on his nationally recognized defensive play alongside Pronger, Tully comments, “I think it was a case of us really pushing each other through the couple of years we played each other. We got to know each other, when you have that type of chemistry you can’t really explain it. We knew enough to give each other constructive criticism when we really needed it, we complimented each other.”

Pronger finished the season with additional hardware, receiving the Max Kaminsky Award for most outstanding defenceman in the OHL. Goaltenders Chad Lang and Ryan Douglas also garnered league recognition, as each were awarded the Dave Pinkney Trophy for lowest goals against average that season. Dawe, Pronger, Tully, Lang, and head coach Todd were all named to OHL All-Star teams that year as well.

In reflecting on his nationally recognized defensive play alongside Pronger, Tully comments, “I think it was a case of us really pushing each other through the couple of years we played each other. We got to know each other, when you have that type of chemistry you can’t really explain it. We knew enough to give each other constructive criticism when we really needed it, we complimented each other.”

The 1992-93 Petes saw eight players selected between the 1991-94 NHL Entry Drafts, including enforcer Matt Johnson and centre Cory Stillman. Stillman was acquired by Peterborough from the Windsor Spitfires in his final year of junior hockey and added a crucial buzz to the Petes.

“Cory was available in a trade, and as a local guy we went after him pretty hard. He came in and we had a good team, but when we added him into the lineup we took another step forward,” commented Twohey.

Furthermore ten Petes, including captain Geordie Kinnear and Peterborough native Chad Grills, transitioned from the OHL to other North American professional leagues. McTavish would go on and have an incredibly substantial career in the Swiss National League.

“Captain Geordie Kinnear was the glue; he was a true leader that was able to keep the dressing room together,” explains Roche, a sentiment that was reiterated by Twohey.

Asked who contributed to his leadership style, Kinnear cited his parents, coaching staff like Twohey, and assistant captain his rookie year Jamie Pegg as major contributors to his eventual captaincy.

“My mom was terminally ill in my rookie year, and somewhere between Christmas and when she passed away on the May long weekend, Jamie sent her a letter letting her know that they [the team] would take care of me and that I had a bright future in Peterborough.”

Geordie also stressed how cohesive the entire team was and that the focus on group success ultimately allowed them to be victorious on the ice. The former Petes captain emphasized the significance of ‘unsung’ players on the team, like left winger Ryan Black, as well.

As a group, what might be most notable was the development of a Petes-Hounds rivalry throughout the season. As the Petes continued to dominate the East division, Sault Ste. Marie was working their way to the top in the West. Prefacing playoffs, the Petes and Greyhounds faced one another in an anomalous series to see which city would host the Memorial Cup that spring. Luckily, the Super Series only determined the 1993 Memorial Cup location and did not influence any of the postseason rankings since the Petes fell four straight to the Soo.

The maroon and white avenged their Super Series flop against the Hounds when the two met in the final playoff series for the J. Ross Robertson Cup. Peterborough won the OHL championship in game five at home in front of 3,670 fans, advancing to the Memorial Cup.

“That first series against the Soo really was a big eye opener for us. We weren’t as good as we thought we were.”

The Petes opened the round robin in typical fashion – with speed and noted toughness – earning wins in their opening games against the Laval Titans and Swift Current Broncos. In their third game of the tournament the Petes fell short to the Greyhounds by four goals, sending the home team to the finals and forcing a second match against Laval in the semi-final. The Petes would advance to the national championship after a close win thanks to a slap shot from Harding and am empty-net goal from Tully, edging out the Titans.

Unfortunately, on their 14th, final, and most critical match up against the Greyhounds, the maroon and white were unable to come out on top and earn the club’s second Memorial Cup.

Regardless of being one national title short from a sweep of banners, the 1992-93 Petes will go down as one of the most successful in franchise history as a large number of the players continue to hold prominent places throughout the Petes record books. Moreover this successful roster produced a group of men fully committed to developing the game across the NHL, AHL, throughout North American minor hockey and, in particular, at the local level.