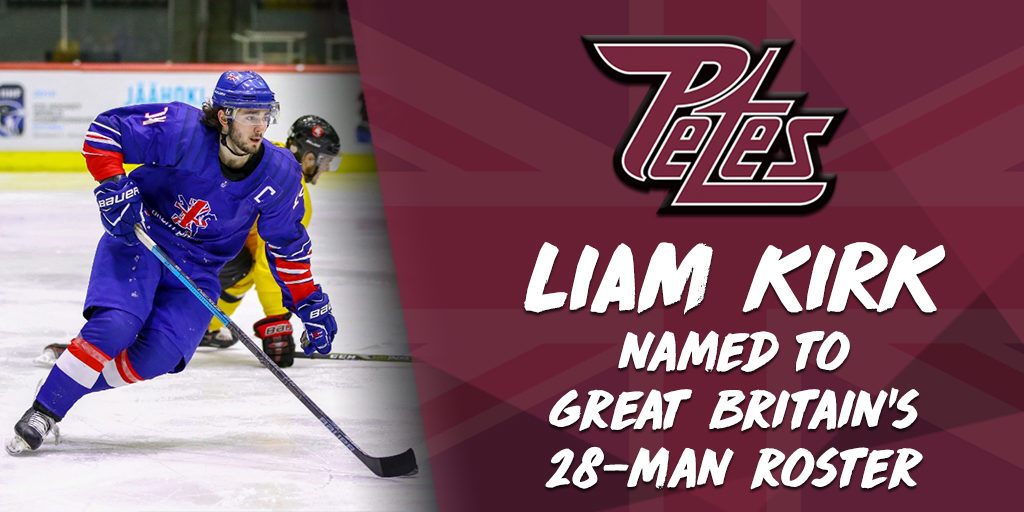 Players named to the preliminary roster will be invited to take part in a training camp and exhibition games against Italy and Hungary in April. The final 25-man roster will compete in the 2019 IIHF World Championship in Slovakia which begins on May 15. Other teams taking part include host team Slovakia, Canada, United States, Finland, Germany, Denmark, and France.

Kirk, who has 25 goals and 21 assists in 60 games with the Petes this season, was a member of last year’s Great Britain squad that earned promotion to the Top Division after winning the Division I championship. He has also suited up for Great Britain for the 2017, 2018, and 2019 DIIA World Junior Championship tournaments as well as for the Under-18 team.

Coach Pete Russell has named a 28-man squad for GB’s training camp next month and matches against Italy and Hungary. The roster will be cut to 25 for games against Torpedo and this squad will go on to represent GB at the World Championship in Slovakia.https://t.co/B2TqhxvHgN pic.twitter.com/iO6InWsq9R

Kirk and the Petes are in action tonight against the Ottawa 67’s at 7:05pm at the Peterborough Memorial Centre. They visit the same 67’s on Friday, March 15 at 7:00pm before returning home to host the Sudbury Wolves on Saturday, March 16 at 7:05pm in their last regular season home game. Tickets are available at the PMC Collins Barrow Box Office in-person, online, or over the phone at (705) 743-3561.

Although they’ve clinched a spot, the Petes are still pushing for playoff positioning. Cheer on the Petes down the stretch with a Playoff Push Flex Pack! For just $69.99 (tax included), fans will receive four regular bowl tickets, four popcorns, and four pops for any Petes home game in February or March. The regular price of this package is $125, which means fans save $55 on the special offer. Contact Mike at (705) 743-3681 x 263.