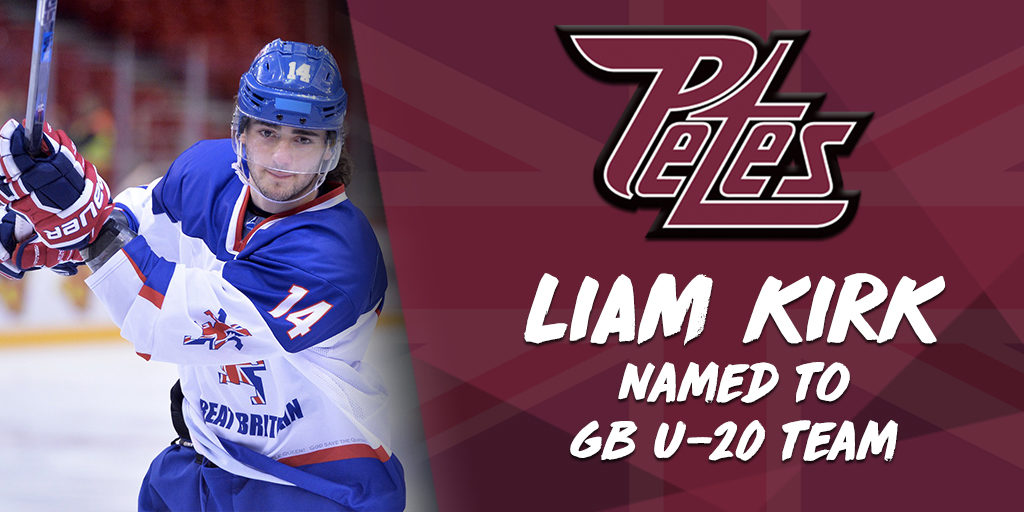 The team will compete in the 2019 IIHF World Junior Championship Division II Group A (D2A) tournament to be held in Estonia from January 13 to 19, 2019. Other teams taking part include host team Estonia, Korea, Lithuania, Romania, and Spain.

Kirk, who has 2 goals and 5 assists in 20 games with the Petes this season, suited up for Great Britain in both the 2017 and 2018 D2A tournament. In 2018, in addition to winning a bronze medal, Kirk was named the tournament’s best forward after scoring the most goals (7), assists (7), and points (14) to go along with a tournament-best 71.43% face off percentage.

Kirk has also competed with Great Britain’s National and Under-18 squads.

Enter the code KIRKYWJC in the Lansdowne Place My Rewards section of the Petes app to earn loyalty reward points.

Kirk and the Petes are back in action on Thursday, November 15 to host the Owen Sound Attack at 7:05pm. Tickets are available at the PMC Collins Barrow Box Office in-person, online, or over the phone at (705) 743-3561.

The best way to support the Petes through the month of November is with a Fall Fan Pack! Get six regular bowl tickets to use in any combination for remaining November Petes home games for $99 (taxes and fees included). Fall Fan Packs are available through the PMC Box Office.