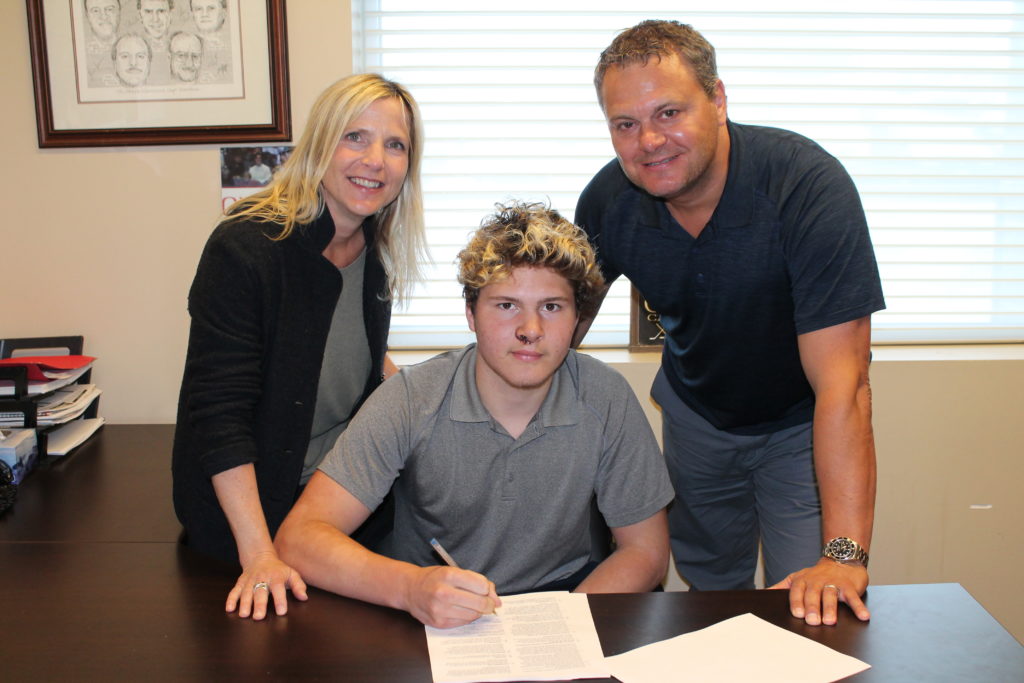 The Petes’ 2019 draft picks featured an influx of players who shared ties deeply connected to players who donned maroon and white before them.

J.R. Avon’s stepfather Steve Larmer played as an underage for the Petes in 1977-78. Jacob Verner’s dad Andrew Verner played for the Petes between 1989 and 1992.

In the first round the Petes chose Ottawa Valley native Mason McTavish, whose named rung familiar in the Memorial Centre as his father Dale played for the Petes from 1989-93.

The 18-year-old centreman’s talent has been described as game-defining and his shot has been rumoured to put holes through the nets of the Evinrude Centre.

Although Mason evaluated all his options before joining the Petes, he ultimately decided to follow in his father’s footsteps and begin his junior career in Peterborough.

“I was really excited to get drafted to the OHL and honestly I didn’t know what I was going to do for the first couple of months but I feel like I took the time and made a good decision. I am happy with it. I’m happy I made it,” he said.

More familiar with the PMC’s unique square corners is Mason’s father, Dale. Following his four seasons with the Petes, McTavish played two years at St. Francis Xavier University earning the Kelly Trophy in 1995 as the AUS’ most valuable player. In 1995, Dale joined the AHL’s Saint John Flames for two seasons before crossing the pond to play professional hockey in Finland from 1997-2000 and Switzerland’s National League for 11 seasons. He represented Canada five times at the Spengler Cup.

McTavish didn’t retire from hockey when he finished playing as he joined the Carleton University Ravens hockey operations staff in 2011 as an assistant coach. It was there he coached two younger Petes alumni Jack Walchessan and Joey West.

When McTavish learned the Petes selected his son fifth overall, he reacted in typical parental form, with joy.

“I was obviously happy that he got picked so high, I think it’s a big honour to get drafted that high,” he said.

In reflecting upon his greatest memories with the Petes, McTavish expresses intense gratitude for the relationships he developed and the collective success they shared.

“The people I met there, the friends I still have from playing junior and the relationships I still have with former players and teammates. It was a great time. Winning the championship was a big thing, something I look back at with great memories.”

While playing for the Petes, McTavish played alongside the likes of Mike Ricci, Mike Dagenais and Jason Dawe in his rookie season. His greatest junior hockey success came in his veteran year with the team as he tallied 81 points in 66 games and earned a J. Ross Robertson Cup with the 1993 crew.

McTavish’s hockey-defined career made Mason’s upbringing particularly unique and familiarized him with the ins and outs of an arena early on.

“The thing is he was around hockey so much from when I was playing in Europe. You could tell he just loved the game so much.”

What makes this duo’s dynamic rare is how closely their adolescent path has reflected one another’s and hockey’s incredible presence in their bond as father and son. Both admit there has always been a focus on fun and the importance of Mason maintaining his autonomy as he navigates his journey through hockey.

During the 20-21 season, McTavish joined EHC Olten of the Swiss League where he put up nine goals and 11 points in 13 regular season games and an impressive seven points in four games during playoffs.

Most recently the junior hockey phenom shared success with Team Canada earning gold at the IIHF U18 World Championships in Frisco Texas. As the 2021 NHL Entry Draft approaches, several prospect rankings list McTavish as a potential top five pick which would make him the first Pete since Zach Bogosian (third overall, 2008) to be selected that high. Mason finished second in 2019-20 OHL rookie scoring, only behind Shane Wright.