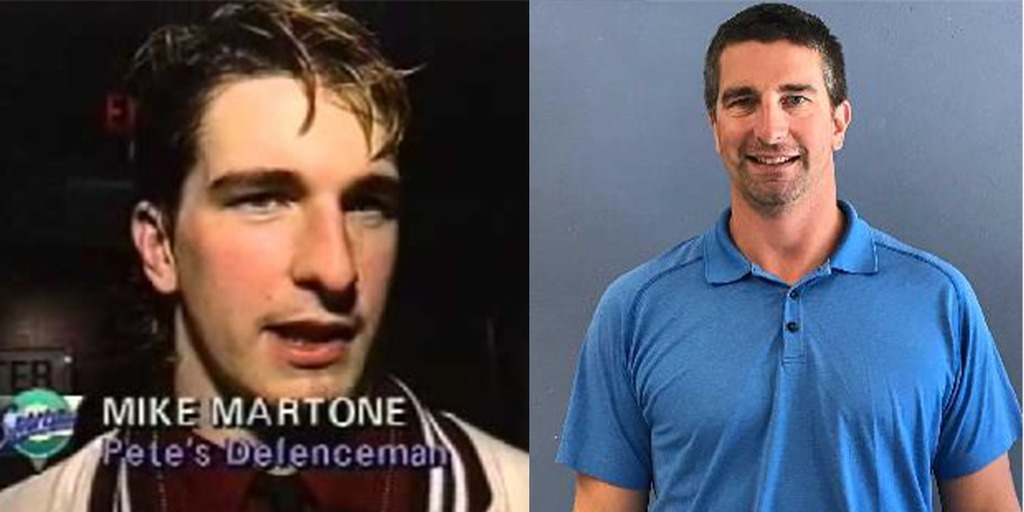 Most assume Peterborough to be Petes alumnus Mike Martone’s hometown. The Sault St. Marie native has established himself so profoundly in the Lift Lock City that to many he was presumably raised here. Nonetheless, his strong ties to the Peterborough community are simply a reflection of the severity of impact a junior team can have on its players. In Martone’s case it lays the groundwork in the choice of place he now calls home.

“I grew up watching the Soo Greyhounds and the Petes battle it out in the Super Series and the Memorial Cup when the Soo hosted it, so I was quite familiar with the Peterborough Petes when I got drafted.”

Martone was selected by the Petes in the 1994 OHL Priority Selection. He dressed for the maroon and white across four seasons and was a member of the 1996 J. Ross Robertson Championship team that also saw the Memorial Cup hosted in Peterborough.

“Being on the other side now as a coach, I have reflected on that season to see what makes a championship team. We didn’t even know we were that good until we were in the Memorial Cup.”

In the formula of producing a championship team, Martone attributes the tight knit bonds created off the ice and mutual respect among each player as reason for the team’s success. Moreover he believes their uniquely competitive nature in practices paid off tremendously each game. 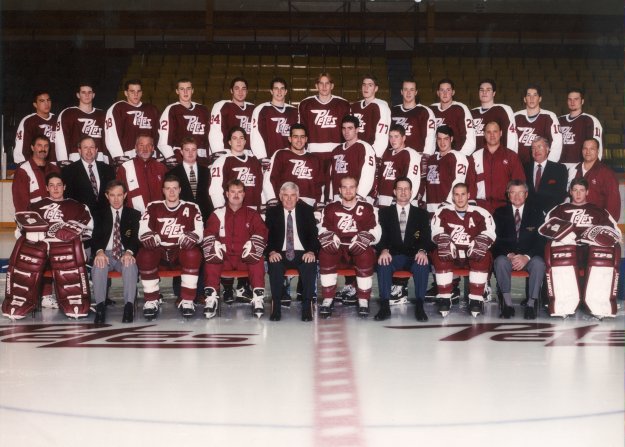 “There weren’t a lot of egos, great relationships, guys like being around each other. Our ability to compete in practice everyday, probably one of the hardest working teams I have ever been a part of. Everyone respected each person’s job equally, and it made that year special.”

The Petes rosters Martone was on in the late 1990’s are notorious for staying in close contact and maintaining the longevity of the friendships since their teens.

“What’s the saying? Win with me today and walk with me forever, championship teams have that winning bond. Everyone goes their separate ways, but when you see those guys, your mind automatically goes to those special bonds that you created through a championship.”

In 1996, Martone was selected by the Sabres in the NHL Entry Draft, however following a Buffalo training camp he entered free agency and signed with the Phoenix Coyotes. Before heading to the Yote’s AHL affiliate the Springfield Falcons, the former Pete underwent surgery for a hip injury.

“I was sent down to the East Coast league that was supposed to be a conditioning stint and ended up lasting all year and that was the year we ended up winning the Kelly Cup and Bruce Boudreau was the coach.”

After two years with the Mississippi Ice Wolves, Martone and his now wife Angela navigated their way to the East Coast, and attended St. Francis Xavier University. Following the completion of his undergraduate degree, Martone returned to the South to play one more season with the Ice Wolves before returning to Ontario. When he retired from playing, Martone set out for teacher’s college and was prepared to create a life in the city where his desire to pursue a career in education began. 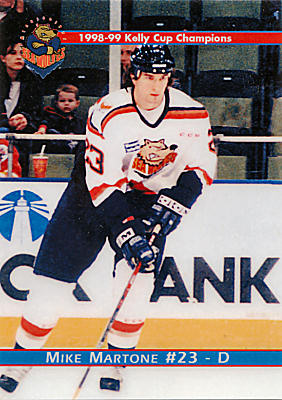 “When I came to Peterborough there was an expectation of us to get out in the community and influence people’s lives, and part of that was being involved in schools. I thought it was the best job in the whole world outside of being a professional hockey player, you get to work with kids all day.”

Beyond the classroom, Martone has a significant presence throughout the home of the Petes as he serves as the president of the Peterborough Minor Hockey Club, resides on the board to the local charity H.O.P.E., participated in Junior Achievements Peterborough, was the honorary chair to the Canadian Cancer Society’s Pink in the Rink campaign, and is a member of the SIP committee. Atop this volunteer work, he coaches a variety of sports at Immaculate, as well as his son Porter and daughter Aubrey’s hockey teams.

“Sports gave me so much, so I sort of want to give back to the sporting world and teach kids things that we may not be able to give them in the classroom. Give them an environment where they can learn skills to make them successful later in life.”

Martone’s compulsion to be involved although ingrained in him since junior hockey and shaped by influence like former General Manager, Jeff Twohey is additionally influenced from his appreciation for Peterborough. The former Petes captain feels incredible gratitude for the relentless support the people of Peterborough provide his family and enjoys taking the active steps to return the favour, and contribute to the evolvement in key facets, like hockey.

Two fantastic choices for this year’s @PetesOHLhockey @CCSPtbo Pink In The Rink game with @IanArmstrong2 and Mike Martone. Two solid gentleman / leaders who will do a great job. pic.twitter.com/j9rpBw1IeL

“I see it in the hockey world because that is how I was brought up in this community but since then and being an adult now I have seen the connection that Peterborough has, that small town feel. Peterborough is there for you when you need help, and everyone rallies around and we have a great sense of community.”

To many players, the Petes are much more than a pitstop on their junior through hockey, for Martone it was the introduction to the place he now calls home. More importantly it is the destination he has chosen to invest his time and trusts to raise his family.

“It takes more than parents to raise a child nowadays, it takes a community and Peterborough definitely provides that.”

Want to hear more about Martone’s former GM Jeff Twohey? Click here to learn about Twohey and his pride in the Petes.