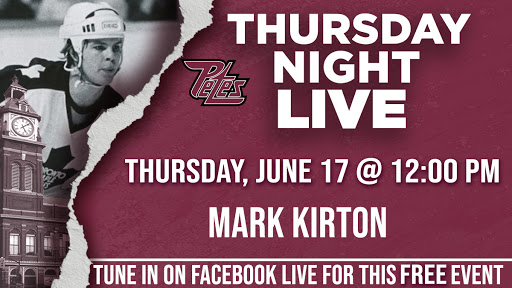 On the Petes live stream, the Regina, Saskatchewan native will reveal his most memorable moments throughout his eight-year NHL career and detail his experience playing in Peterborough from 1975-78 under legendary coach Roger Neilson. Additionally, Kirton will shine a light on his battle with Amyotrophic Lateral Sclerosis (ALS) and his fight to find a cure.

In the first intermission, fans will be invited to put their Petes knowledge to the test on the CHL Petes app. Upon downloading the app, fans are encouraged to click Petes Play in the menu to participate in one of a kind, Petes trivia.

During the second intermission, Mackenzie ‘Kashaga’ Robinson, will be making his second TNL appearance. The fan-favourite appeared in the movie Camp Rock 2 drumming alongside Nick Jonas and has a new album coming out on Friday, June 25.