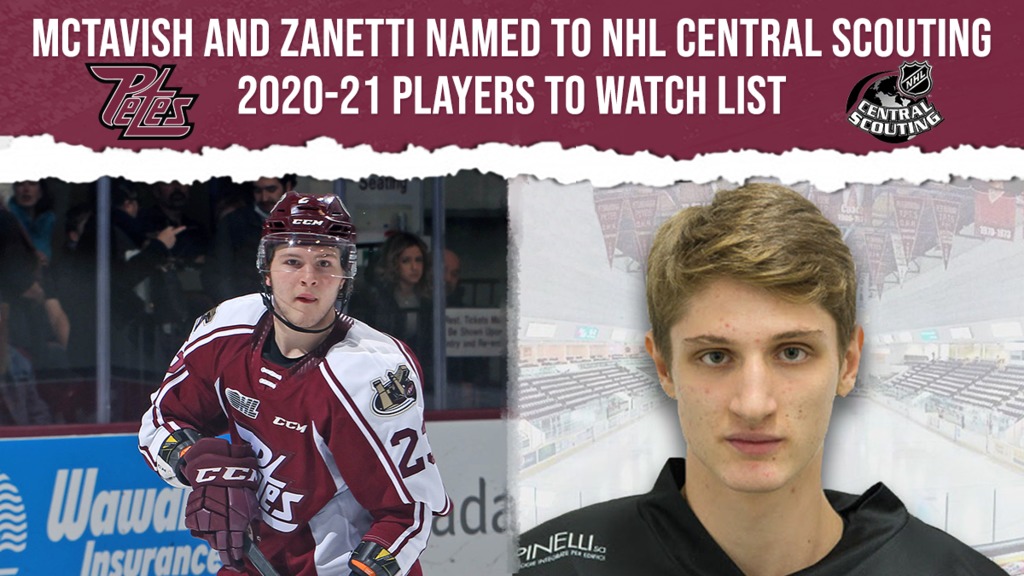 The NHL Central Scouting Service has released their updated 2021 Players To Watch List ahead of the 2021 NHL Entry Draft. Petes forward Mason McTavish and defensive prospect Brian Zanetti were named to the list.

McTavish, a 6’0”, 198 lbs centre, earned an ‘A’ rating on the players to watch list for the second time this year, suggesting that he could be a possible first round pick at this year’s draft. McTavish was selected fifth overall by the Petes in the 2019 OHL Priority Selection Draft. In his rookie season he registered 42 points in 57 games and was invited to Team Canada’s National Men’s U-18 Camp.

The Pembroke, Ontario native finished second in 2019-20 OHL rookie scoring, only behind Shane Wright. Several prospect rankings list McTavish as a potential top-5 pick in the 2021 NHL Entry Draft, which would make him the first Pete since Zach Bogosian (3rd overall, 2008) to be selected that high. Only three other OHL skaters received an ‘A’ rating.

Zanetti, a 6’2”, 172 lbs defenceman who committed to the Petes in July, also earned a ‘C’ rating on the players to watch list, suggesting that he could be a possible fourth to sixth round pick as well. The Swiss player was selected by the Petes in the 2020 CHL Import Draft, 35th overall.