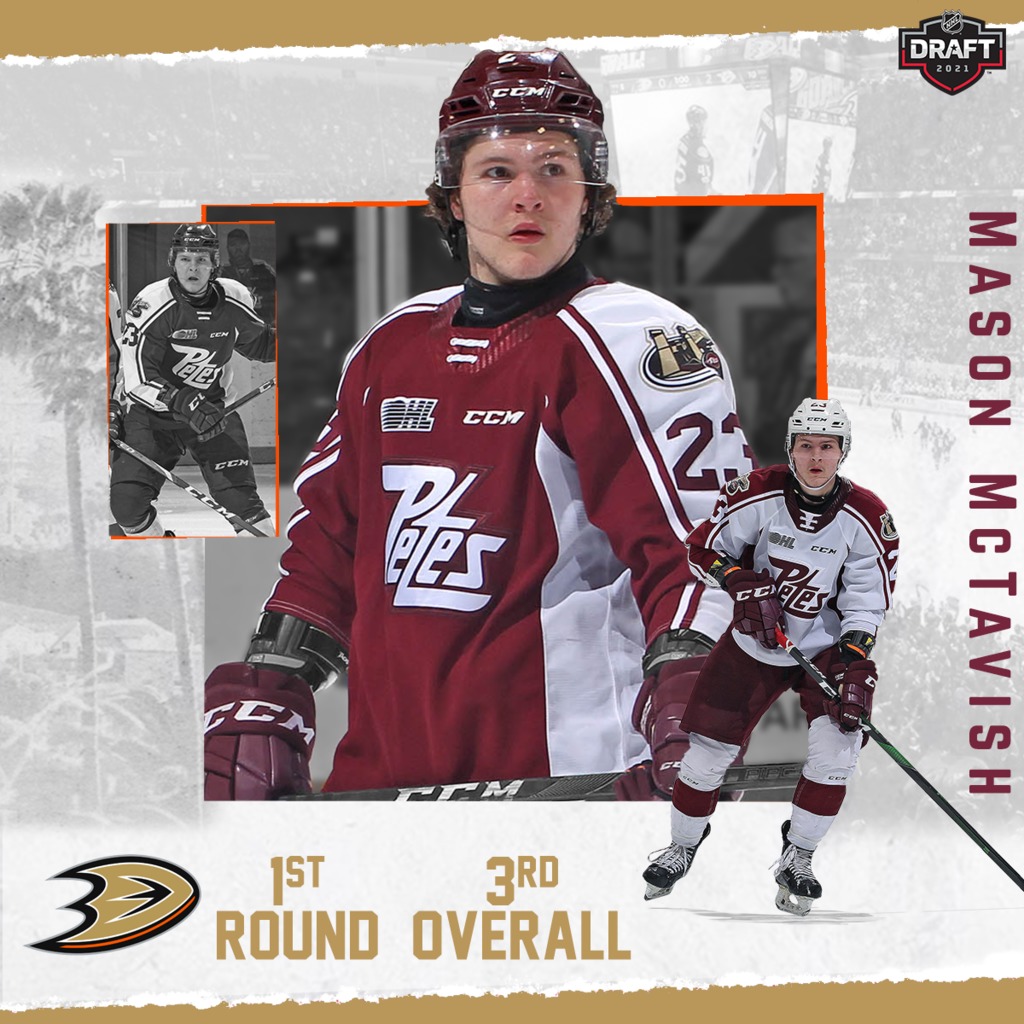 Tonight, Mason McTavish was selected by the Anaheim Ducks, 3rd overall during the first round of the 2021 NHL Entry Draft.

From Carp, Ontario, who was born in Zurich, Switzerland had a productive rookie season with the Petes during his 2019-20 campaign, recording 29 goals and 13 assists for 42 points, finishing second in the OHL rookie scoring race. He was named to the OHL 2nd All-Rookie team.

With the 3rd pick in the #NHLDraft, we select Mason McTavish.

While the 2020-21 OHL season was cancelled due to the COVID-19 pandemic, the Petes 5th overall pick from the 2019 OHL Priority Selection was loaned to the EHC Olten of the Swiss League. McTavish amassed 11 points (nine goals, two assists) in 13 regular season games and seven points (two goals, five assists) in four playoff games, while playing overseas.

Serving as alternate captain, McTavish helped Team Canada win gold for the first time since 2013, at the 2021 U18 IIHF World Championship in Texas. The centreman finished the tournament with 11 points (five goals, six assists) in seven games, ranking fifth overall in the tournament and tied second on Team Canada.

On Wednesday, July 21, McTavish was invited to Hockey Canada’s National Junior Team Summer Development Camp and will hit the ice on July 28-Aug. 4 at the Seven Chiefs Sportsplex on the Tsuut’ina Nation near Calgary.

McTavish becomes the first player from the Petes, since Nick Ritchie in 2014, to be drafted in the first round. Ritchie was selected 10th overall by the Anaheim Ducks. Head Coach of the Ducks, Dallas Eakins suited up for the Petes from 1984-88.

That jersey looks good on you, Mason. #DucksDraft presented by @Honda. pic.twitter.com/uI0wjPvcN3

The Petes will welcome the Sudbury Wolves and first overall draft pick Quentin Musty for their home opener on Thursday, October 14 at 7:05 pm. Tickets are now on sale for the 2021-22 season. For information on season tickets, private suites, special packages, groups, and single game tickets, contact Mike Kosciesza at mkosciesza@gopetesgo.com or call (705) 743-3681 ext. 263.