Michael Little and Jack York to Pursue Opportunities in QMJHL 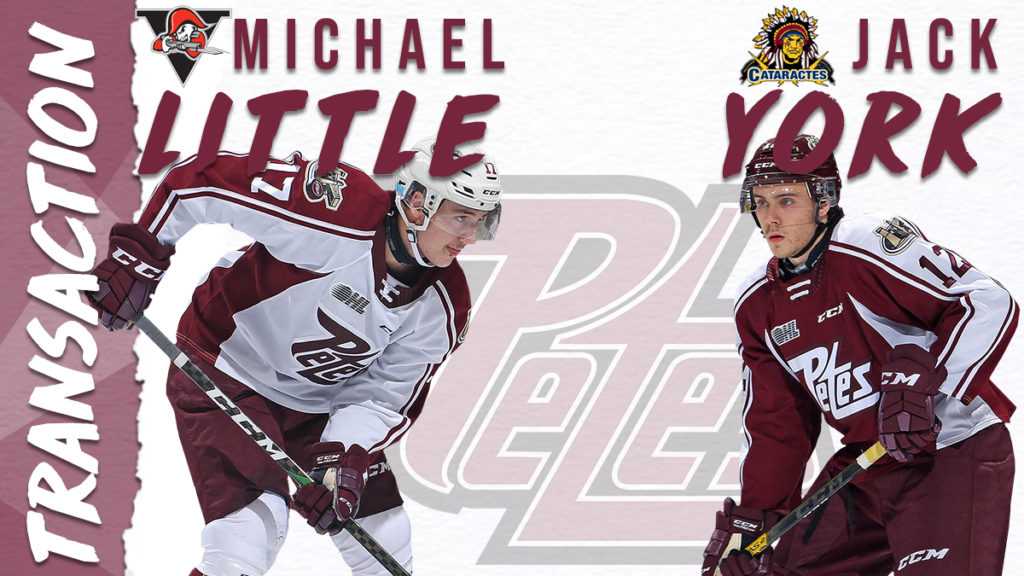 Peterborough Petes players Michael Little and Jack York will each pursue opportunities to play in the Quebec Major Junior Hockey League (QMJHL) in the 2020-21 season.

General Manager Michael Oke announced Thursday that the team has come to terms with both the Drummondville Voltigeurs (Little) and Shawinigan Cataractes (York).

Little, originally from Mississauga, Ontario, joined the Petes during the 2018-19 season, and has played a combined 229 OHL regular season games between the Petes and Mississauga Steelheads. He has recorded 83 points, including 31 goals and 52 assists, during his junior hockey career to-date. The 6’0”, 196lbs left wing was Mississauga’s 3rd round (59th overall) pick in the 2016 OHL Priority Selection.

York, an Ottawa, Ontario native, was acquired by the Petes at the trade deadline in January, 2020. The 6’0”, 194lbs defenceman contributed 2 goals and 6 assists in 22 games with the Petes in the pandemic-shortened 2019-20 season. He has played a combined 174 games, amassing 14 goals and 41 assists for 55 points, through three seasons with the Petes, Barrie Colts, and Kitchener Rangers. York was Kitchener’s 5th round (98th overall) pick in the 2016 OHL Priority Selection.

“Michael and Jack were key members of the Petes roster during their time with the club,” noted Oke. “They each contributed to our overall team success, and we are excited that they have earned further opportunities in junior hockey. We wish them both nothing but the best moving forward.”

The 2020-21 OHL Regular Season is set to begin on December 1, 2020. Season Ticket Members and Return to Play Flex Pack holders will receive priority access to tickets to attend games this season. All ticket packages can be purchased by emailing the Petes or by calling the Petes Office at 705-743-3681.