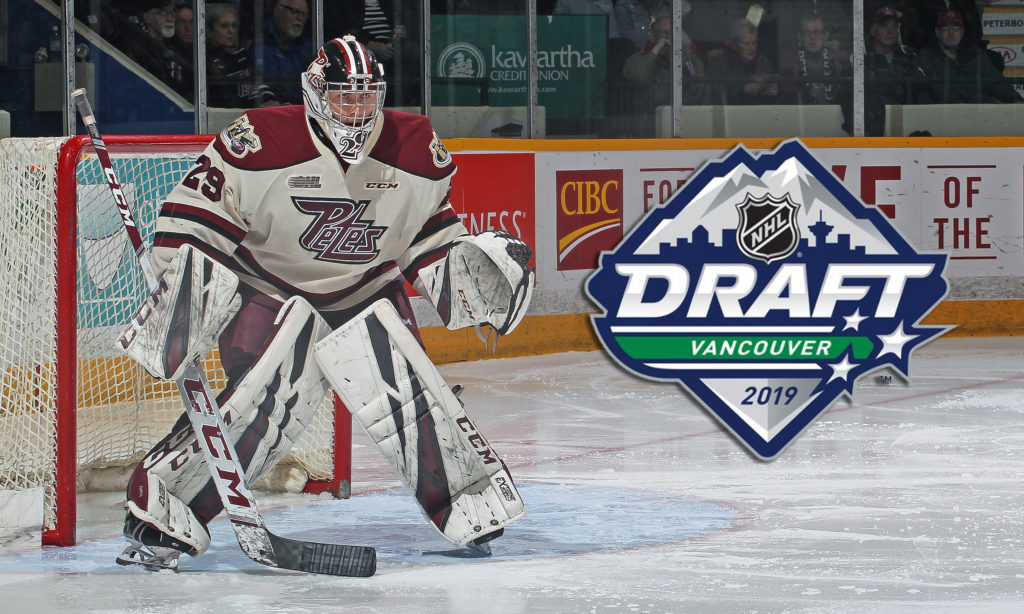 It’s been quite the off season for Hunter Jones. A busy schedule filled with exciting hockey opportunities for the now-veteran netminder has kept the Brantford native on his toes, but he’s prepared for what could be one of the most significant experiences of his life to date.

Just before being named to Hockey Canada’s National Junior Team Summer Development Camp roster, Hunter faced some questions about what the lead up to the 2019 NHL Draft has been like.

This summer is arguably the most important of your life to this point. Have you done anything differently this off-season than in years prior in preparation for the draft?

In terms of training, it hasn’t been too different. I’ve taken the feedback I got from the Petes, I’ve been tackling that and putting it into my off season training. Other than that I’ve been pretty busy lately, like going to the NHL Combine and then right after that going to the Hockey Canada goalie camp in Calgary. I honestly haven’t been around my hometown that much to be able to be too consistent in the gym, I’ve just been able to go in when I can when I’m home.

How was the Hockey Canada goaltending camp?

It’s always fun going there and hanging out with a bunch of goalies. You’re all a bunch of weirdos there so (laughs). You get to meet a whole bunch of new people. I was a U-17 goalie and it’s kind of cool because you looked up to the older guys when you were there when you were younger. Then it was Dylan Wells and other goalies from across the league that have moved on to pro hockey now. You get to be in those shoes now, being the older guy and having younger guys look up to you. I had a lot of fun. The first day is always pretty much a bag skate, but after that you get to see a lot more pucks and I had a great time. 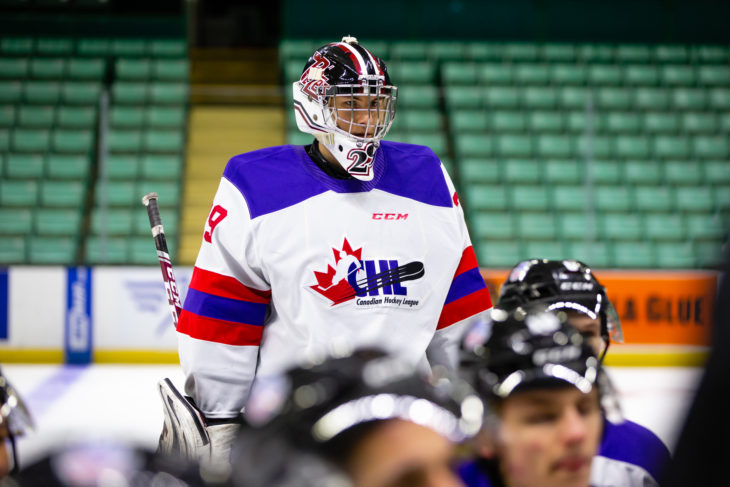 What advice have you been given by teammates or friends that have gone through the draft process?

I was talking to Merks (Ryan Merkley) and Chis (Declan Chisholm) and asked them how long the days are and what to expect and how they went into it. The advice I usually got back was just don’t really focus on it too much and just enjoy the time while you’re there. You only get to go through this once and it’s a pretty surreal experience, so just try not to think about where you’re getting drafted or what number it’s at, and just kind of be patient and wait for your name to be called. I think with my success I had during the year I’ve set myself up to be pretty confident heading in to the draft, and I think that’s why I’m not too worried about it. I’m just kind of excited to be out there and be part of the process and I think it will be a lot of fun.

What is the toughest or strangest question you’ve been asked by NHL teams in your interviews with them so far?

Probably the strangest one I was asked was, “If you got hit in the head with a puck at practice, how would you react?” I just looked at them and said, “Well I’m not going to go swinging at the guy in the corner, it happens,” (laughs). Other than that I didn’t get too many weird questions. Some interviews were more laid back than others. Some of them try to get you to say some things, negatively, about your teammates or the team, but you just have to think about it and give them a mature answer. It was hard, but I got through it.

How would you have answered the question that was famously asked of fellow netminder Spencer Knight– is your goal to stop pucks or prevent goals?

I would have said prevent goals. It doesn’t matter if I’m stopping pucks and letting more goals in. If I’m preventing goals then I should be stopping pucks.

It’s known that NHL clubs aren’t just looking for the best hockey players, but also for character, well-rounded people. Did you find that to be true when going through the interview process?

Every team is always asking about the personality side of the hockey player. They watch you all season and know what type of player you are on the ice, so they want to get to know you as a person. They’re putting you into their organization so they want to make sure that they’re drafting a good person off the ice, they don’t really want to draft a guy who doesn’t get involved his in community or something like that. Every single team that asked me questions, it was always personality stuff, it’s a huge thing that they take into account.

.@ShutoutsJones, with the help of a few of his hockey playing friends, collected donations for the Brantford Food Bank at a free public skate in his hometown yesterday afternoon!

That being said, you were one of top performers at the NHL Combine in Buffalo a few weeks ago. What was the experience like; were you happy with your results?

At the Combine I almost felt like the testing was secondary to the interviews. I had a pretty busy week, probably busier than other goalies – I had 22 interviews throughout the week. Then there were three days of testing and they split the testing up so you could get your rest and perform as effectively as possible. I really enjoyed the NHL Combine, I had a lot of fun. I think it’s a really great experience for players coming through the NHL Draft and a good way for players to connect with teams before the draft. I’m glad that they do it and it’s a great place to be able to showcase your abilities off the ice. I was happy with how I performed.

You were days away from being eligible for last year’s draft. How do you think your late birthday has affected your development and the draft process?

It’s helped me in a sense because it gave me the chance to develop my game a bit further and be a more professional goalie. I know if my draft year had been last year I probably wouldn’t have been a very highly ranked goaltender, if at all. We had Wellsy there on the team so it was tough for me to get into some games, but I thought I performed well this season and that the extra year helped me out a lot.

Which of your skills or characteristics do you think is your most valuable asset?

I’m obviously a pretty big guy so I have a lot of size to my game. I think I’m a very structured goalie. It’s easy for me to stay in the net and play the frame of the net, that’s the technical side of things. Off the ice, I think I’m a good person and I’m pretty easy to talk to. Kind of very laid back, always pretty easy to talk to around the rink, I never push people away. So I think that’s a valuable asset when you’re looking at players. 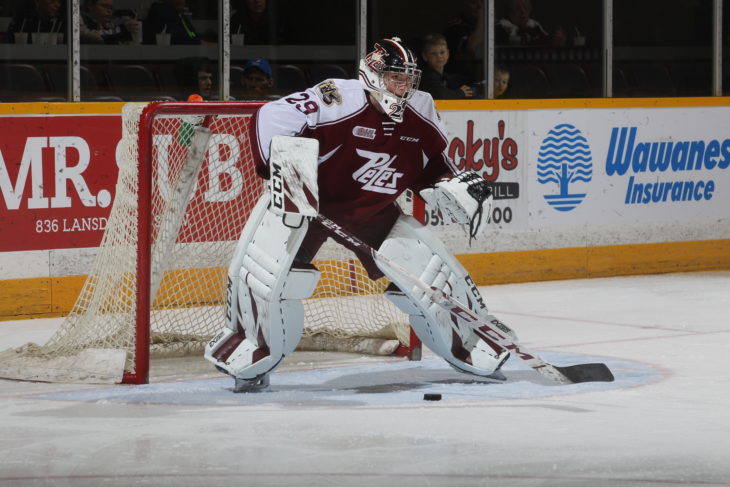 What area of your game do you think you need to work on to elevate your game?

I think I can work on improving my puck handling and my skating, getting quicker in the net, and helping out my defencemen a little bit more.  But I think the most important thing for me is to be consistent throughout the season, especially when you go through ups and downs with the team. Things might be going negatively for you for a stretch, but I think just being able to push through that and having that consistency in your game and kind of staying out of your own head and staying positive through those tough times is a huge thing. If I work on that I think I can make a real push for the NHL.

Who is attending the draft with you?

Do you plan on getting out in Vancouver to see some of the city?

I’m going to try to see the city with my family, go for a walk with them around town, because I know when once draft time rolls around I’ll be pretty busy, but it’ll be fun.

Stay up to date with Hunter and Nick Robertson throughout the 2019 NHL Entry Draft in Vancouver by following the Petes on Facebook, Twitter, Instagram, and online.