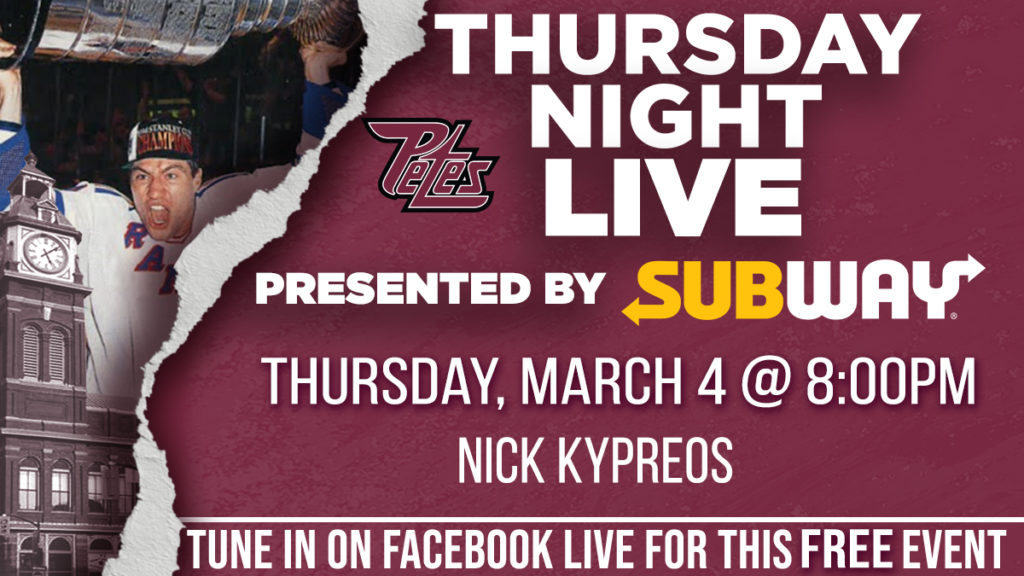 Nick Kypreos, former NHL player and host of Real Kyper on Line Movement is this week’s special guest on Thursday Night Live (TNL) presented by Subway. TNL will air on March 4 at 8:00 pm on the Petes Facebook page.

Kypreos, an alumnus of the North Bay Centennials, will discuss his experience playing against the Petes during the mid-’80s, in addition to providing fans insight into his eight-year NHL career. The Toronto native will discuss his autobiography Undrafted, a story focused on hockey, family and what it takes to be a professional hockey player. Additionally, he will share details on his new alcoholic beverage Little Buddha Cocktail Co. while reminiscing about winning the 1994 Stanley Cup with Petes alumni Dick Todd and Colin Campbell as members of the New York Rangers.

During the first intermission, the Petes will share part one of local media’s hot takes on the Petes digital Who Wore It Best campaign. Members of the media will share which alumni they believe best represented each Petes’ jersey number from one through five.

Fan favourite Long Range Hustle will be making their second TNL appearance during the second intermission. The indie rock band will be performing their new track Comeback Kid, which was released on Friday, February 26.