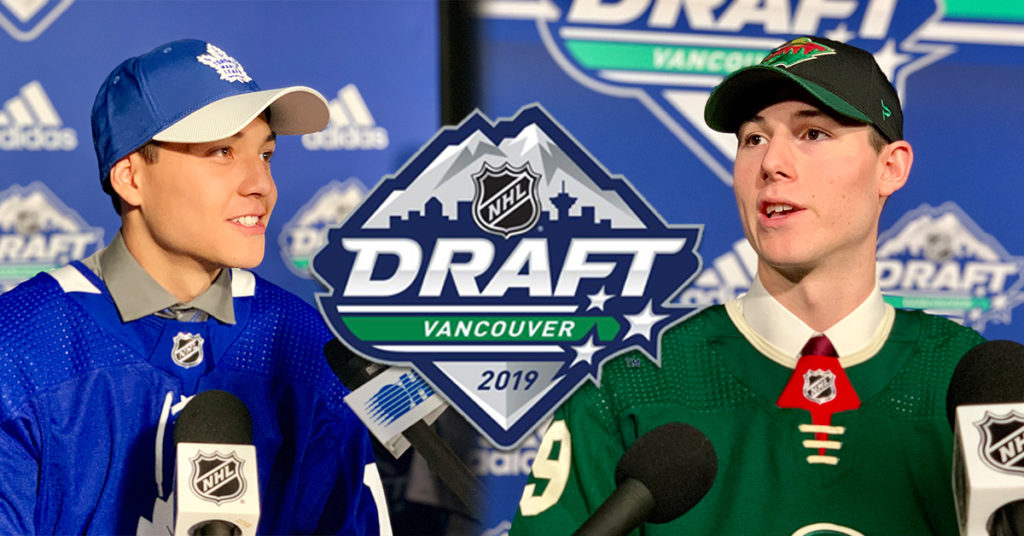 Nick Robertson and Hunter Jones were in Vancouver, British Columbia on Saturday to hear their names called during the second round at the 2019 NHL Entry Draft.

With their first pick in the draft, the Toronto Maple Leafs selected Nick Robertson in the 2nd round, 53rd overall. The left winger from Northville, Michigan and born in California, had a productive season with the Petes in 2018-19. The sophomore put up 27 goals, 28 assists, 55 points and 24 penalty minutes this season, suiting up in 54 regular season games. He led the team in power play goals (8), game winning goals (3), first goals (5), and shootout goals (2). In his first post-season appearance, Robertson registered 1 goal, 1 assist, and 2 points in 5 games.

Excited to be drafted by the Toronto Maple Leafs! Thank you to my family for getting me to this point. @MapleLeafs #leafsnation pic.twitter.com/JoDLNYBIn7

The skilled 5’9”, 162lbs forward has taken part in a multitude of international and special events, including the 2019 NHL Draft Combine, the 2019 Sherwin Williams CHL/NHL Top Prospects Game, USA Hockey’s All-American Prospect Game, the 2018 Hlinka Gretzky Cup, and USA Hockey’s Select 17s Tournament. He was recently named to USA Hockey’s World Junior Summer Showcase roster to compete for a chance to represent the United States at the 2020 IIHF World Junior Championship.

His tireless off-ice work ethic contributed to Robertson winning the Petes’ 2019 Outboard Marine Veterans Trophy for outstanding sportsmanship and ability and 2018 Black’s Family Trophy as Petes Rookie of the Year.

Extremely excited to be apart of the @mnwild organization. Truly amazing day and can’t wait to get things going! pic.twitter.com/gh3374koLI

The 6’4″, 202lbs netminder has participated in numerous international and special events, including Hockey Canada’s Program of Excellence Goaltending Camp in 2019, 2017, and 2016, the 2019 NHL Draft Combine, the 2019 Sherwin Williams CHL/NHL Top Prospects Game, the 2018 Canada Russia Series, the 2016 World Junior A Hockey Challenge, and the 2016 Under-17 World Hockey Challenge. He was recently named to Hockey Canada’s National Junior Team Development Camp to compete for an opportunity to represent Canada a the 2020 IIHF World Junior Championship.

His hard work and off-ice contributions have contributed to Jones winning multiple awards, including the 2019 Norm Bryan Award for the most improved Petes player, the 2019 Gary Dalliday Community Service Award, and the CHL Goaltender of the Week (September 23, 2018).

Jones is the first Pete to be drafted by the Minnesota Wild.

With two players selected this year, the Peterborough Petes have had 185 players drafted to the NHL – the most by any OHL team.

Catch Nick, Hunter, and the rest of the Peterborough Petes in action all season long with a Season Ticket Membership! Can’t commit to a full season? Try a 10- or 20-Game Flex Pack! Call Mike at (705) 743-3681 ext. 263 to purchase or for more information.