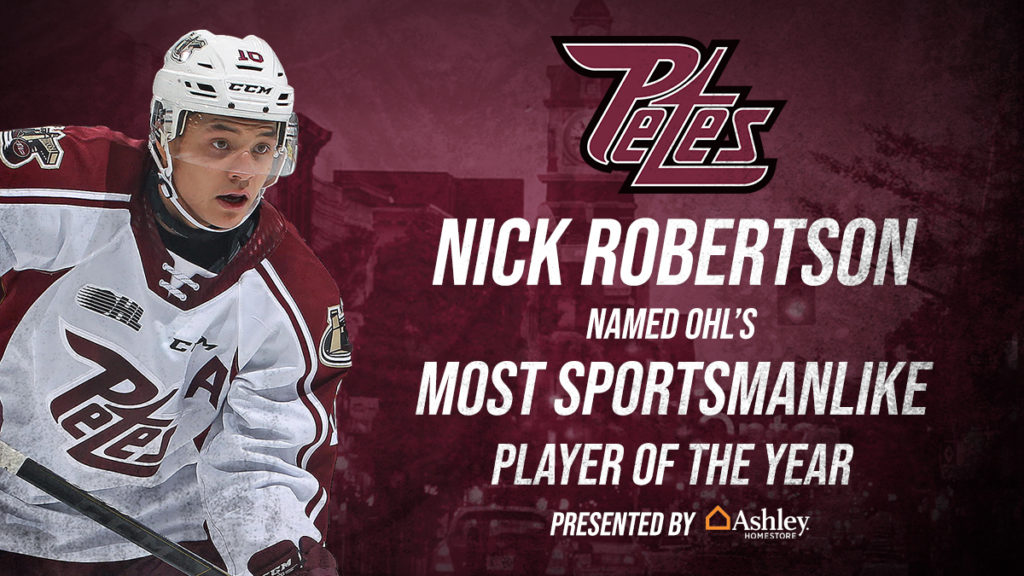 The Ontario Hockey League today announced that Petes forward Nick Robertson is the 2019-20 recipient of the William Hanley Trophy awarded to the OHL’s Most Sportsmanlike Player of the Year presented by Ashley HomeStore.

Robertson earns the award after leading the CHL in goals and finishing tenth in OHL scoring by compiling 86 points including 55 goals and 31 assists along with a plus-minus rating of plus-29 and 40 penalty minutes in 46 games played. He was held without a goal just nine times over the course of the 2019-20 season.

“I really appreciate being recognized as the OHL’s Most Sportsmanlike Player of the Year,” said Robertson. “I’d like to thank my General Manager Mike Oke, Head Coach Rob Wilson, the Petes staff, and my teammates.”

“I’d also like to thank Petes fans. You all made the PMC an electrifying building, got us excited and motivated to win and, win or loss, you were always there to support us.”

An 18-year-old from Northville, Michigan, Robertson was selected by the Petes in the first round, 16th overall in the 2017 OHL Priority Selection. This season he was recognized in the OHL Eastern Conference Coaches Poll winning the best shot and most dangerous in goal area votes, finishing second in the hardest worker, best shootout shooter and best stickhandler categories, and was picked as having the third hardest shot. Robertson was a second round pick (53rd overall) by the Toronto Maple Leafs in the 2019 NHL Entry Draft, and represented the USA in the 2020 IIHF World Junior Hockey Championship in the Czech Republic.

“This is a proud moment for Nick and the Peterborough Petes,” added Petes General Manager Mike Oke. “He is one of the top players in the OHL and plays within the rules. Leading not only the OHL but also the CHL in goals is a special accomplishment. From the moment he joined the Petes, Nick has approached and played the game the right way and is more than deserving of this award.”

The William Hanley Trophy is awarded each year based on a selection by the 20 General Managers of the Ontario Hockey League. All 20 teams submit a nominee but are not permitted to vote for their own candidate. The trophy is presented by the OHL to commemorate William Hanley, former Secretary-Manager of the Ontario Hockey Association for over 25 years.

Robertson will be the OHL’s nominee for CHL Sportsman of the Year.