OHL Announces Academic Players of the Month for November 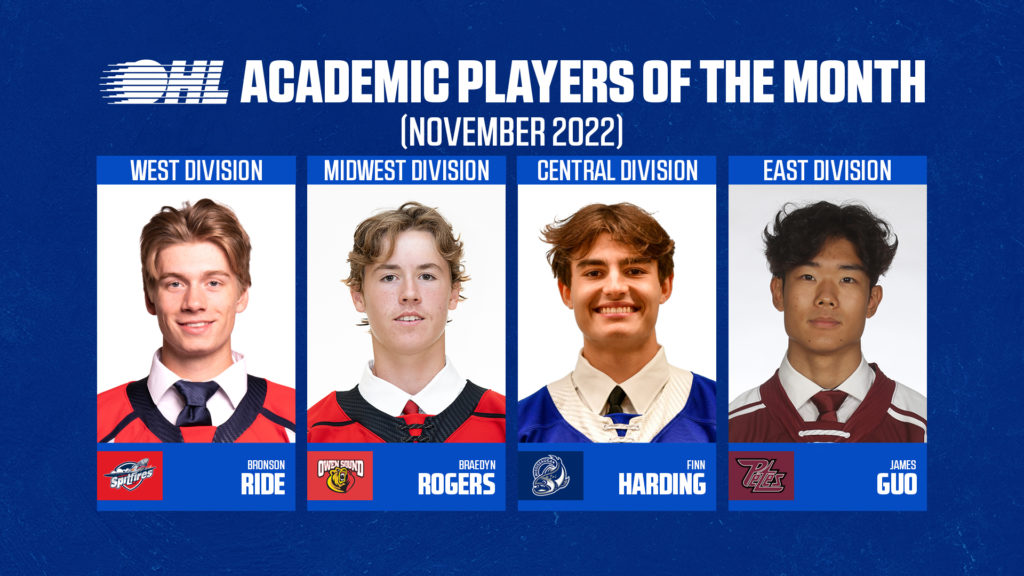 Toronto, Ont. – The Ontario Hockey League today announced that Finn Harding of the Mississauga Steelheads, Braedyn Rogers of the Owen Sound Attack, James Guo of the Peterborough Petes and Bronson Ride of the Windsor Spitfires have been named Academic Players of the Month for November.

Guo is achieving an 87 percent average in grade 12 university-level Advanced Functions, Interdisciplinary Studies and Nutrition and Health at Thomas A. Stewart Secondary School.

“James is a dedicated athlete and student,” said Petes academic advisor Shannon Fife. “He balances his academics with a busy on and off-ice schedule. James is a leader and presents himself as such in the school.”

The 17-year-old from Woodbridge, Ont. has played 18 games this season, recording one goal for the Petes. The 6-foot-1, 180Ib. blueliner was selected in the fourth round (74th overall) by Peterborough in the 2021 OHL Priority Selection.

“Finn is a diligent and responsible student, whose maturity makes him a pleasure to teach,” said the Steelheads academic advisor Jeff Kyrzakos. Finn has managed to achieve a 91 percent average with a difficult course load while managing the transition to the OHL.”

The 17-year-old from Toronto, Ont. has played 18 games this season, recording two goals and one assist for a total of three points. The 6-foot-1, 182Ib. blueliner was selected in the eighth round (151st overall) by the Steelheads in the 2021 OHL Priority Selection.

“Braedyn has a solid work ethic both on and off the ice,” said Owen Sound’s academic advisor Sarah Rowe. “His teachers describe him as a conscientious worker and a dedicated student. He completed English in the summer and now carries a workload that includes two grade 12 university level courses despite only being in grade 11. Braedyn has a very positive attitude and is a pleasure to work with.”

The Belleville, Ont. native has played 11 games this season, recording one assist for the Attack. He also represented Canada Red at the recent World Under-17 Hockey Challenge in British Columbia. The Attack selected Rogers in the second round (30th overall) of the 2022 OHL Priority Selection.

Ride, who also earned the honours in October 2021, has carried an overall average of 90 percent to date, including high marks in grade 12 Data, Functions, Business Leadership and Co-op at St. Anne High School.

“Bronson has started off this grade 12 year on a very high note,” said Spitfires academic advisor Danielle Chevalier. “He is excelling in all of his courses. His teachers love his maturity and hard work ethic. They say he is a pleasure to have in their classrooms.”

The 17-year-old from Oakville, Ont. has appeared in 23 games this season, recording one goal and four assists. Ride was selected in the second round (20th overall) by the Spitfires in the 2021 OHL Priority Selection.

The OHL continues to produce student-athletes that move on to both professional and U SPORTS men’s hockey endeavours.

A total of 349 graduates utilized their OHL Scholarship at post-secondary institutions across North America during the 2021-22 academic year, with a total contribution by teams of over $3.5 million. Over the past 10 seasons, OHL Scholarship payments have totalled more than $25 million.

A total of 217 OHL Alumni were included on U SPORTS men’s hockey rosters to open the 2022-23 season.