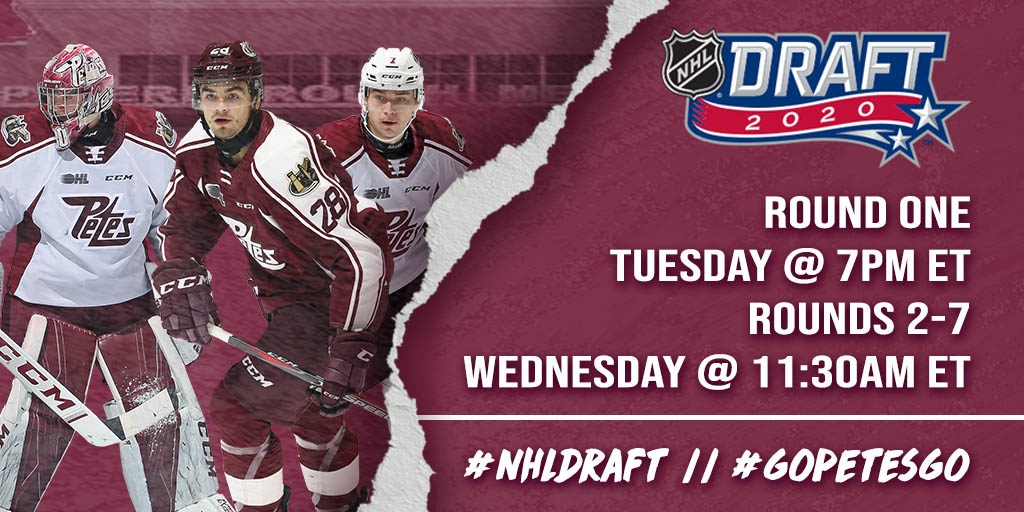 Zach Bogosian and the Tampa Bay Lightning have been crowned Stanley Cup champions as the National Hockey League successfully navigated through all of the challenges presented by COVID-19 to complete the 2019-20 season. Now, the NHL turns its attention to the future.

The 2020 NHL Draft will be held exclusively online for the first time in its history, but that doesn’t alter the excitement level for the OHL’s rising stars who hope to hear their names called either Tuesday or Wednesday.

57 OHL players are listed in NHL Central Scouting’s Final Rankings with the results ready to unfold Tuesday night with 31 first round picks beginning at 7:00 pm ET followed by rounds two through seven starting Wednesday at 11:30 am ET.  Follow along pick-by-pick with coast-to-coast coverage on Sportsnet.

Wednesday’s proceedings should be interesting as well, with the OHL featuring a total of 21 players inside NHL Central Scouting’s top 60 North American skaters.

“He’s got a huge presence in the net. I think he plays a lot like Ben Bishop.”@NHLdotcom‘s @mikemorrealeNHL looks at @PetesOHLhockey netminder Tye Austin (@tye32austin) who hopes to hear his name called in the 2020 #NHLDraft.#OHL Prospect Primer 🏒: https://t.co/ETV0nhBbIA pic.twitter.com/0zfCgT9pCQ

Other Petes players who have had some attention from NHL clubs include sophomore shut-down defenceman Shawn Spearing, who has put up 8 points and a +6 rating in 81 OHL games, as well as Max Grondin, who enters his third year of NHL entry draft eligibility on the back of a career season which saw him put up 33 points while leading the entire OHL in face-off winning percentage (61.4%).

Former Petes players Cam Butler (traded to Niagara for Akil Thomas in 2020) and Pavel Gogolev (traded to Guelph for Ryan Merkley in 2019) are also ranked by NHL Central Scouting as potential mid- to late-round picks this week.

Since 1969, a total of 2,379 OHL players have been selected in the NHL Draft representing over 20% of all players chosen by clubs and a figure higher than any other league solidifying the OHL as the number one supplier of NHL talent.

Best of luck to all players and their families at the 2020 NHL Draft!

Click a name to watch video profiles of the top ranked prospects.