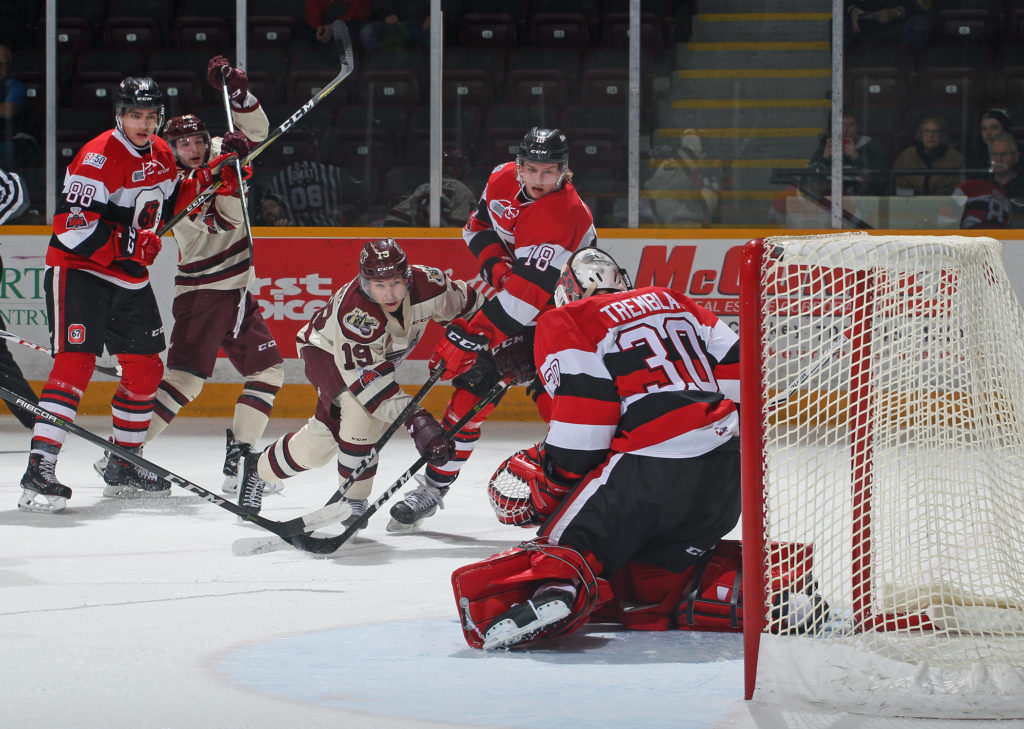 The Petes were looking  for their fifth victory in six games, but it was the OHL’s top ranked 67’s that wrapped up the weekend with a 4-2 win on Sunday afternoon in the nation’s capital.

Peterborough’s first quality chance came just under 8 minutes into the game when Nick Isaacson would tip a Chris Paquette point shot in the direction of the net, but Cedrick Andree denied the opportunity.

Ottawa would open up scoring on a power play after Chad Denault was charged for hooking. 20 seconds of 5-on-4 action was all it took for USA National Junior Team hopeful Sasha Chmelevski to break open the board. Tye Felhaber pushed the puck back to Noel Hoefenmayer on the point, and after receiving a pass at the top of the far circle, Chmelevski released a wrist shot that sailed over Hunter Jones’ glove to give his club a 1-0 lead.

Isaacson and Paquette would combine again for a scoring chance as Paquette fed Isaacson on a 2-on-1, but Andree was again up to the task.

Although the Petes have been struggling on the power play, the next few minutes would see them improve on their man advantage record. Consecutive cross checking infractions by Ottawa resulted in a 22 second 5-on-3 advantage for the Petes.

11 seconds later, the maroon and white converted on the chance to tie the game at 1. Pavel Gogolev picked up the puck from Nick Robertson and skated around the perimeter of the offensive zone. He moved the puck to Semyon Der-Arguchintsev who, while stationed between the circle and goal line, squeezed the puck past Andree.

SAMMY! @Pavel_gogolev17 finds SDA on the side of the net and he tucks it behind Andree on a 5-on-3 power play! @nickrob2001 with the second assist. 1-1 game!

The game would continue with the 67’s down a man for another 1:49. 21 seconds after their first power play marker, the Petes would add another courtesy of Gogolev. Paquette skated the puck the length of the ice before Liam Kirk accepted then dished it to Gogolev for him to drag into the slot and send past Andree to give the Petes a 2-1 lead.

Felhaber would respond shortly after for Ottawa, bringing the game back to a tie. Quinn Yule moved the puck out of a battle along the boards to Felhaber who deked around a Pete in the defensive zone before pulling Jones to the opposite side of the net to score his first of the afternoon.

A thrilling first frame came to a close with Peterborough holding a slight edge on the shot clock.

Fact: 17 is our most shots on goal in a first period this season.#GoPetesGo pic.twitter.com/7zPjL27hP7

The second period was all 67’s as they added two more goals through the stanza.

What appeared to be Ottawa’s first goal of the period was called off after some confusion on the call and some video review.

Crossbar? Penalty shot? Goal? WHAT IS GOING ON?!

The ref calls a goal on the ice, but it’s called back 😁 pic.twitter.com/3vk9fOwPfS

Mitchell Hoelscher sent the puck from the side boards to Chmelevski on the point where he managed to keep the puck in the zone despite pressure from the Petes. Chmelevski found Felhaber streaking into the slot, with the latter sending the puck behind Jones to restore Ottawa’s lead.

A mirror image of their first goal, Jack Quinn sent the puck from the side boards to Hudson Wilson on the point. Merrick Rippon took a pass from Wilson before blasting the puck into the net, giving the 67’s a two-goal lead.

After a record number of shots in the first, the Petes sent just three shots toward the Ottawa goal in the second frame.

The third and final period wouldn’t see much more than the division rivals exchange pairs of penalties.

With the 67’s down a man with 3:39 to play, Jones was pulled from his net part way into the power play to give the Petes a 6-on-4 advantage. They managed a few more shots on Andree through the game’s final minutes, but couldn’t cut into Ottawa’s lead.

After a stronger period, final shots were tied 30-30.

Chmelevski, Felhaber, and Andree were named the game’s first, second, and third stars.

The Petes will face the 67’s again on Sunday, December 16 at 2:05pm, followed by a post-game skate with the team. Before then, Peterborough is back in action on home ice on Thursday, December 13 at 7:05pm when the Flint Firebirds visit for the only this season, and will travel to Guelph to face the Storm on Friday, December 14 at 7:30pm.