Past and Present Petes Meet in World Junior, U SPORTS Showdown 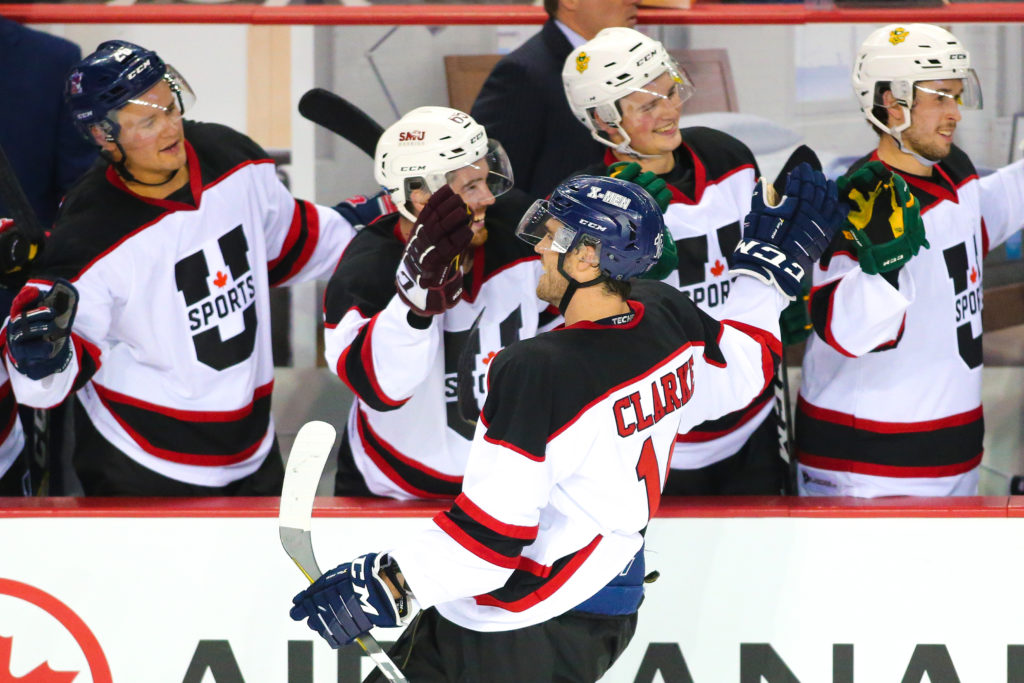 Clarke joined the Petes in his overage campaign after spending two seasons with the Windsor Spitfires, at the same time that Ang began his Ontario Hockey League journey. Since graduating from the OHL, Clarke has joined the St. Francis Xavier University roster, clinched two AUS conference titles, and made two appearances at the U SPORTS championship with the X-Men. For Clarke, he’ll be reuniting with more than his former Peterborough comrades, as his former teammate, St. Francis Xavier alumnus and current McGill University student Nathan Chiarlitti (former Owen Sound Attack) will suit up on behalf of U SPORTS as well.

“I’m excited to play in Ontario, it’ll be exciting to play in front of my friends and family since they don’t get out here [Antigonish, Nova Scotia] too much,” Clarke responded, when asked what he was most looking forward to about playing at the Meridian Centre on Wednesday and Thursday. “I’m excited to play with old teammates like Chiarlitti and Brett Litchfield; he’s one of my best friends and plays for Carleton.”

“It will be great to see all the other players around the league that you always play against but you never really get to play with. It’s just exciting to play against the Canadian World Junior team because, you know, every Canadian kid growing up idolizes those guys.”

While with the Petes, Clarke centred Josh Macdonald and Greg Betzold, two men that remain in his social circle, beyond his junior career.

“I still call some of the guys my best friends – [Garlent] plays out here at St. Mary’s; Josh MacDonald and I grew up in London together. We were on a line together, and he’s still one of my best friends.” He continued on to say, “The list goes on and on – you make a special bond with those players. [I] definitely keep in touch with lots of the guys.”

This was the second time in Clarke’s career that he and Hunter Garlent adorned the same jerseys, as Garlent also spent parts of three seasons with the Petes. For now, the duo stand across each other at face-offs, with Garlent attempting to draw the puck back for the AUS’ Saint Mary’s Huskies. The centreman is currently leading the AUS in assists, with 22 in 28 games.

Although not staying in as close contact with Peterborough’s current leader of goals, Clarke hasn’t forgotten the impact Ang made during his rookie season.

“He’s always been an amazing skater. I remember in his first year, he scored [the East Division] goal of the year against London, he was only sixteen. It’ll be interesting to play him now after having played with him years ago.”

Despite having played against the majority of those featured on the potential Canadian National Junior roster, Clarke is uncertain of what to expect in regards to competition.

“Everyone was sixteen when I played against them. I recognize some names, but I didn’t get to play against them at their true potential. I remember watching DiPietro stand on his head, so it will be interesting to watch him play.”

Transitioning from Ontario to the East Coast and setting out on an academic endeavor usually poses its obstacles, however, Clarke notes the lessons he learned while with the Petes eased his move to Antigonish.

“Everything you learn from playing in the OHL, from playing on a team, you can translate to university life. For one thing, you have to be a good team player – you can’t do it all on your own. You have people to lean on, you have a support system.  The coaches teach you that, your teammates teach you that – how to bond with people.”

It appears Clarke’s choice to pursue an X-Ring has been seamless, earning a +11 plus/minus rating during his 2015-16 season, and tallying 28 points in 30 games the season after, all while working on a degree in business.

His fast track to adulthood via time in the OHL aided in his journey to and throughout university. “You definitely grow up quick, being on your own. There are so many different memories, you know, like there’s lots of pressure. As much as there is pressure going to an exam there’s pressure going to the rink. You have scouts coming to watch you.” 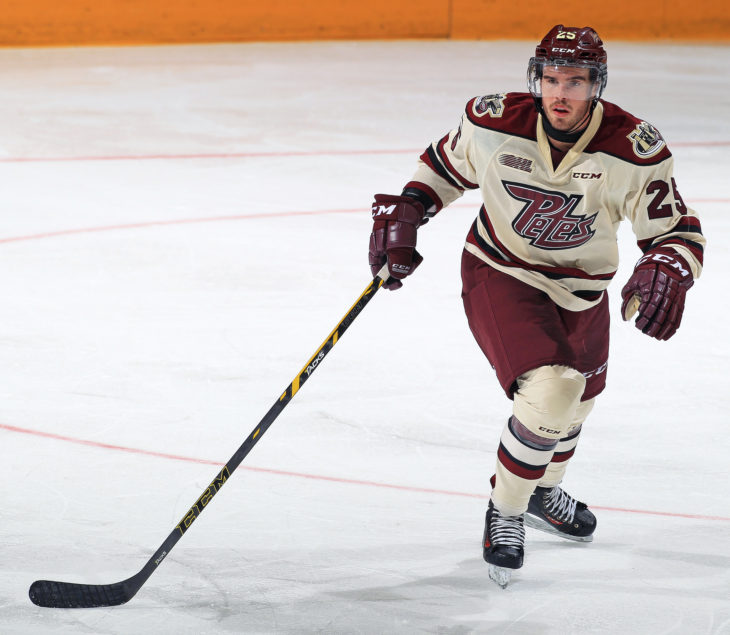 Throughout the conversation, its apparent that a lot of memories from his time with the Petes follow Clarke. He recalls scoring the Teddy Bear Toss goal with the maroon and white, and the friendships he developed while in the Patch.

The U SPORTS all-stars shutout the Canadian Juniors in their initial matchup of two exhibition games, beating Canada 3-0 on Wednesday evening. The all-stars defeated the Canadian Juniors again on Thursday by a score of 4-3. Both Petes alumni had strong performances, as Clarke had an empty net goal in the final minutes of Wednesday’s game, and Garlent burned Canada’s prospective goalie Samuel Harvey in a friendly shootout.

Hunter Garlent, arguably the best shootout shooter in U SPORTS, just burned Samuel Harvey in a shootout. Love it.