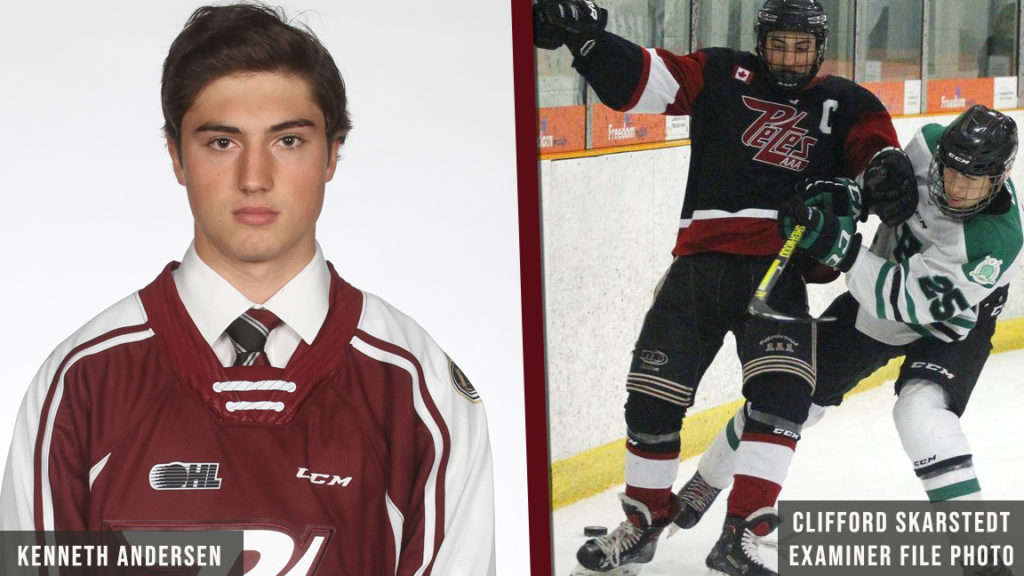 Will Everson, Joe Lavalley and Madeline O’Neill-Hawthorne are the 2020 recipients of the annual Petes Education Fund Scholarship.

The Petes Education Fund awards a $500 scholarship annually to a deserving minor hockey player from each of the Midget AAA Petes, Midget AA Petes and Midget AA Ice Kats to assist with post-secondary education costs. The fund is generated in part from proceeds of the OHL Petes 50-50 draw.

The head coach of each team is asked to nominate a player.

“It’s always nice to be recognized especially by the OHL Petes,” Everson said.

“I was very excited when we got the news Peterborough would have a team last year. We knew the team would be a good team with Rochey (head coach Scott Roche) getting all the players together but to tell you we’d end up as we did, we all shocked ourselves and had a great year. It was a lot of fun.”

In nominating Everson, Scott Roche stated, “Will is a great athlete who competes hard and is fully engaged in every situation. Will was our captain this year, leading scorer and one of the top players in our league all season. He also led our team in playoff scoring as well.“Will was also the MVP of the Ottawa tournament, a tourney that we won beating some of the top teams in the province. On top of all this, Evy is a fantastic student.”

Scott’s brother Dave Roche coached the Midget AA Ice Kats and nominated O’Neill-Hawthorne who also helped St. Peter’s to a COSSA AAA title. She will be taking criminology at the University of Ottawa this fall.

“It’s nice to be acknowledged for your hard work,” O’Neill-Hawthorne said. “(Hockey) taught me a lot about leadership and responsibility. I’ve been able to make a lot of good friends over the years.”

“I am proud to announce that Madeline O’Neil Hawthorne is our chosen player to receive the Petes 2020 Scholastic Bursary,” stated Dave Roche.

“Madeline has been an Ice Kat her whole minor hockey career and with her hard work, dedication and personality was a great teammate, coachable player and leader.

“She improved every year and gave everything she had in practices and games to not only lead by example but with her passion off ice as well. It has been my pleasure to be able to coach Madeline and wish her all the best in her next adventures.”

Lavalley, a Midget AA Petes goalie, also backstopped the Holy Cross Hurricanes to a COSSA AA hockey title. He plans to complete one more year of high school to upgrade his math marks. He is leaning toward attending Trent University for a science program. “Joe was one of our hardest working players,” stated Midget AA Petes coach Shawn Cooligan.

“Joe missed very few practices or games and was one of our most committed players. He was always focused and dialed in. He is a true competitor.”

“This might not sound too humble,” Lavalley said, “but I felt like I deserved (the award). A lot of our players were really just playing for fun, to be honest. There were only a select few of us who were playing to win and for fun. I think I was one of them. I could see both sides of those who were just there for fun and those who wanted to win and I could connect with both sides.”

The Petes Education Fund also awards a graduating student at each city high school $500 who displays improvement, attitude and development. The student need not be an athlete.