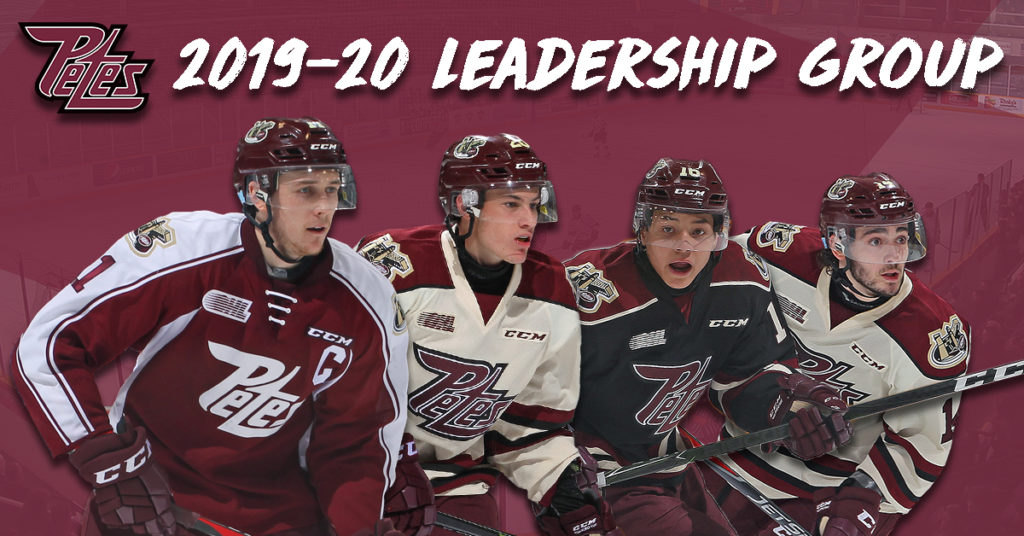 The Peterborough Petes have announced their leadership group for the 2019-20 season, which is off to a 2-1-0-0 start including wins against two of the country’s top teams. The members of this season’s leadership group are as follows:

Gallant, who was named the 60th captain of the Petes last season, will continue in his role. Selected by the Petes in the 1st round, 5th overall in the 2015 OHL Priority Selection, he previously served as an alternate captain for the 2017-18 season. Gallant recently signed a three year entry-level contract with the San Jose Sharks after receiving an invite to their 2019 Training Camp as a free agent. The 6’2”, 193lbs centre has suited up in 198 OHL games, totalling 51 goals and 59 assists for 110 points. The Oakville, Ontario native is well known for his two-way play, and is among the league-leaders in faceoff winning percentage every season.

Chisholm is in his fourth season with the Petes. Originally selected by the Petes in the 2nd round, 24th overall in the 2016 OHL Priority Selection, the Bowmanville native has registered 9 goals, 67 assists, and 76 points in 157 games. The reigning Petes Defenceman of the Year, who was a finalist for the OHL’s 2018-19 Max Kaminsky Trophy for Defenceman of the Year, was selected by the Winnipeg Jets in the fifth round of the 2018 NHL Entry Draft. He is expected to compete for a spot on Canada’s National Junior Team.

Robertson comes into the 2019-20 season having set personal bests in goals, assists, points, and plus/minus last year. The California native, who was selected 16th overall by the Petes in the 2017 OHL Priority Selection, is a Toronto Maple Leafs prospect after he was picked in the 2nd round, 53rd overall in 2019. The American World Junior Team hopeful was last season’s winner of the Petes Outboard Marine Veterans Trophy for outstanding sportsmanship and ability.

Kirk returns to the Petes for his second OHL season after being drafted by the club in the first round of the 2018 CHL Import Draft. The only English born and trained player to be drafted to the NHL, he was a seventh round pick of the Arizona Coyotes in the 2018 NHL Entry Draft. Kirk registered 26 goals, 21 assists, and 47 points in 63 games in his first OHL season.

“We’re very happy to have Zach continue in his role with Declan, Nick, and Liam supporting him,” commented Petes General Manager Mike Oke. “We have a great group of young men leading our players, who are all prepared to have a strong season.”

Looking to cheer on the Petes and the new leadership group? Single game tickets for all Petes regular season home games are now on sale at the PMC Grant Thornton Box office in person, by phone at (705) 743-3561, or online. To view the Petes’ full schedule, click here.