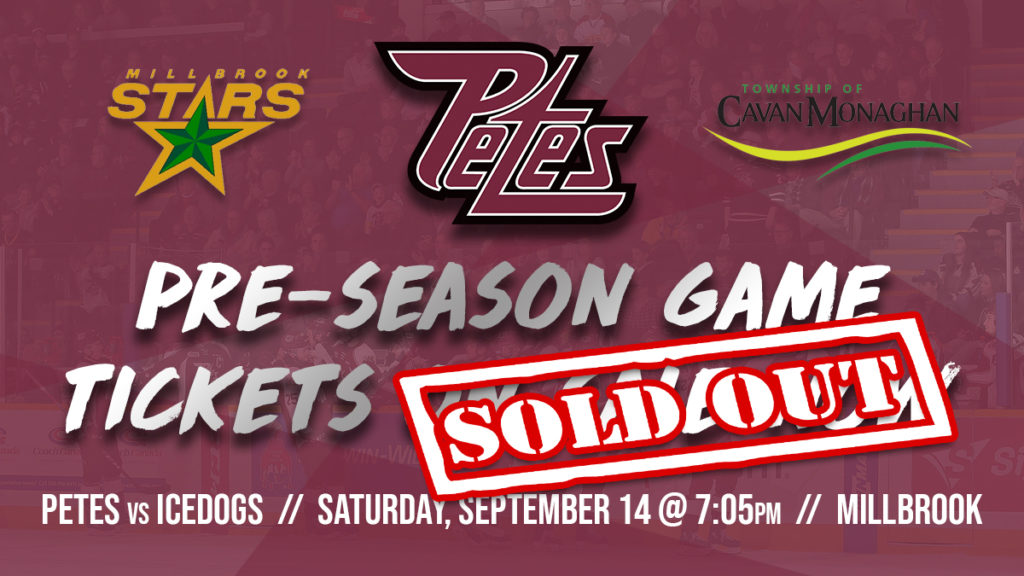 Tickets for the Petes pre-season game in Millbrook on Saturday, September 14 at 7:05pm against the Niagara IceDogs are sold out.

Tickets went on sale on Tuesday, with Petes Season Ticket Members, residents of Cavan Monaghan Township, and MDMHA families getting priority access to tickets. As of Thursday afternoon, all tickets available for the game were sold. Tickets were available at Moody’s Bar and Grill and Crawford Copy in Millbrook, as well as at Imprinted Apparel and the Petes office in Peterborough.

The exhibition tilt is part of the grand opening of the new Cavan Monaghan Community Centre.

“We’re very happy, especially for the Millbrook and District Minor Hockey Association, with the amount of interest shown in this game by our fans,” commented Burton Lee, Petes Executive Director of Business Operations. “We’re excited to be part of this milestone event for the Township of Cavan Monaghan and its residents.”

Event attendees are asked to carpool where possible, as on site parking will be limited. Early arrival is also encouraged, as seating is general admission and is not guaranteed.

Fans interested in being added to a waitlist for tickets can contact Petes Season Ticket Sales & Service Coordinator Mike Kosciesza by calling 705-743-3681 ext. 263 or by sending him an email.

Before September 14’s game, the Petes will hit the ice for 2019 Training Camp at the end of August. The maroon and white will play five exhibition games, including three games as part of the OHL Preseason Showcase in Kitchener from August 30 to September 1, and a road game against the Niagara IceDogs on Friday, September 13.

The Petes will open the regular season with nine games on the road before returning to play their home opener on Thursday, October 17 at 7:05pm. against the Hamilton Bulldogs.

To view the Petes’ full schedule, click here. Petes season tickets and 10- and 20-ticket flex packages are on sale now. Fans interested in these ticketing options should contact the Coordinator of Season Ticket Sales and Service, Mike Kosciesza, at (705) 743-3681 ext. 263 or by email.