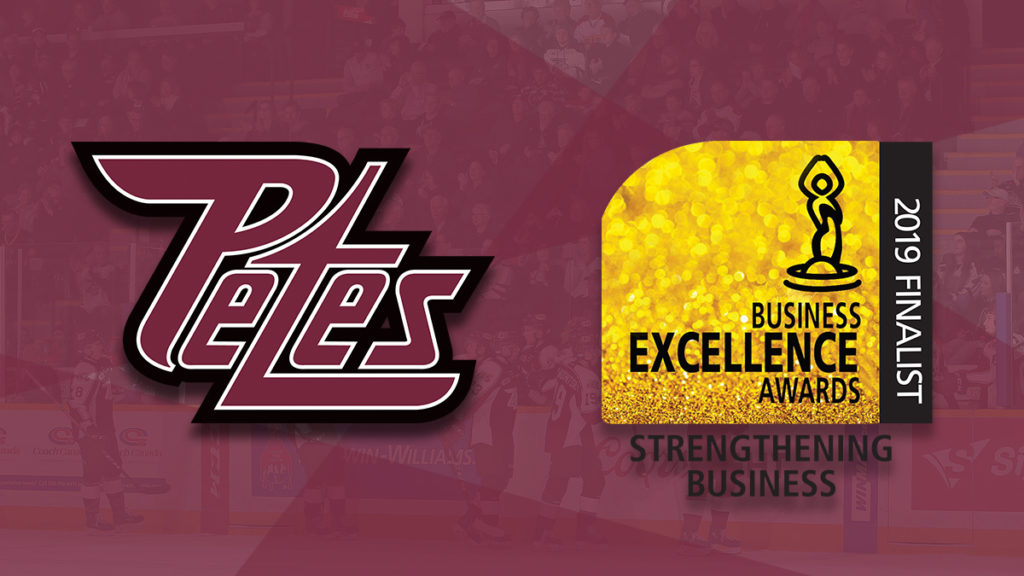 The Peterborough Petes are excited to announce that the organization has been named a finalist for the 16th Annual Peterborough Business Excellence Awards.

The Petes are one of three nominees for the Trent University Local Focus Award which is given annually in recognition of a business or organization with significant local focus in their enterprise, either through manufacturing product locally, or retailing/utilizing products, and/or services produced locally, as well as their community involvement.

“The Petes hockey and business operations departments are dedicated to strengthening our community while delivering amazing experiences for people in the Peterborough area, and it’s an honour for our entire staff to be recognized with this nomination,” commented Burton Lee, Petes Executive Director of Business Operations. “We’re proud to be nominated alongside our friends at Merrett Home Hardware and the group at Brides United Peterborough.”

The Petes also congratulate their corporate partners who were nominated. Merrett Home Hardware is also nominated for the Local Focus Award, while Shorelines Casino Peterborough and Publican House Brewery were both named finalists for the Kawartha Credit Union Hospitality Award.

The Peterborough Business Excellence Awards are held annually to celebrate the achievements of the business community in Peterborough and the surrounding areas.

Awards are presented in 20 categories, and winners will be announced live on stage. The Business Excellence Awards will be hosted at Showplace Performance Theatre on Wednesday, October 16 at 7:30pm. Tickets for the ceremony can be purchased here.

The 2019-20 Petes season is fast approaching. 2019 Petes Training Camp is set to begin in late August. The Petes will play five exhibition games between August 30 and September 14, including three games as part of the OHL Preseason Showcase in Kitchener and a game at the Cavan Monaghan Community Centre in Millbrook on Saturday, September 14 at 7:05pm against the Niagara IceDogs.

The Petes will open the regular season with nine games on the road before returning to play their home opener on Thursday, October 17 at 7:05pm. against the Hamilton Bulldogs.

To view the Petes’ full schedule, click here. Petes season tickets and 10- and 20-ticket flex packages are on sale now. Fans interested in these ticketing options should contact the Coordinator of Season Ticket Sales and Service, Mike Kosciesza, at (705) 743-3681 ext. 263 or by email.