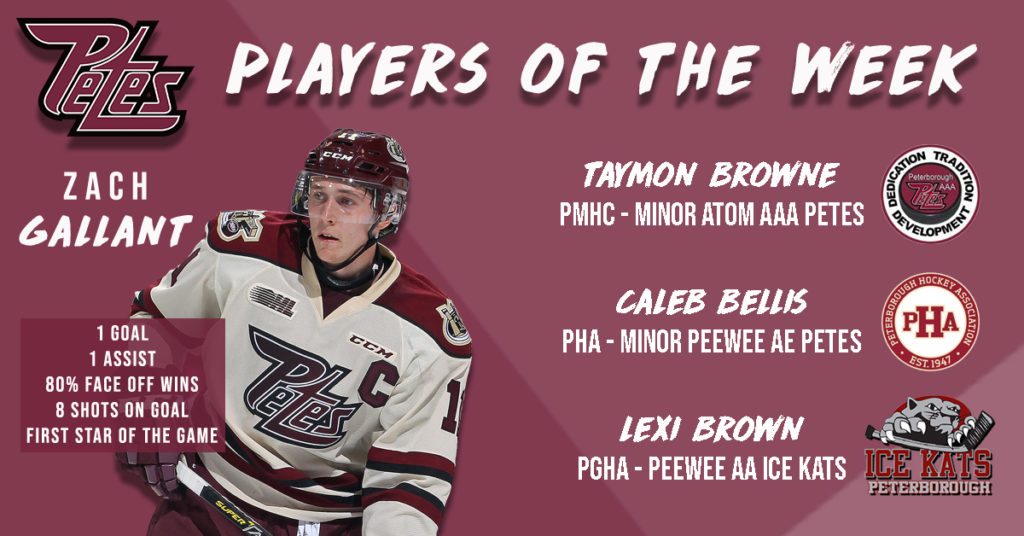 Peterborough Petes Player of the Week: Zach Gallant
The Petes defeated the country’s top ranked 67’s in Ottawa 3-2 on Sunday where Gallant registered an assist and scored the game-winning goal, his first of the season. He dominated in the face off circle winning 80% of his draws and finished the game with a team-high 8 shots on goal.

Minor Hockey Player of the Week: Taymon Browne (PMHC)
Browne scored a hat trick on Saturday as he led his Jesse’s Tap and Grill Minor Atom AAA Petes to a 5-1 victory over the Markham Waxers. On Sunday, he scored once in a loss to the York-Simcoe Express.

Minor Hockey Player of the Week: Caleb Bellis (PHA)
Bellis continued to show off his defensive abilities as the Minor Peewee AE Petes defeated the Pickering Panthers twice over the weekend. Off the ice, Bellis pushed his teammates to raise money for the Merrett Mental Health Run, and was the top fundraiser on the team.

Minor Hockey Player of the Week: Lexi Brown (PGHA)
Brown, a goalie for the Peewee AA Ice Kats, earned a shutout on Friday, September 27 against the Clarington Flames. She’s been working incredible hard during their pre-season.