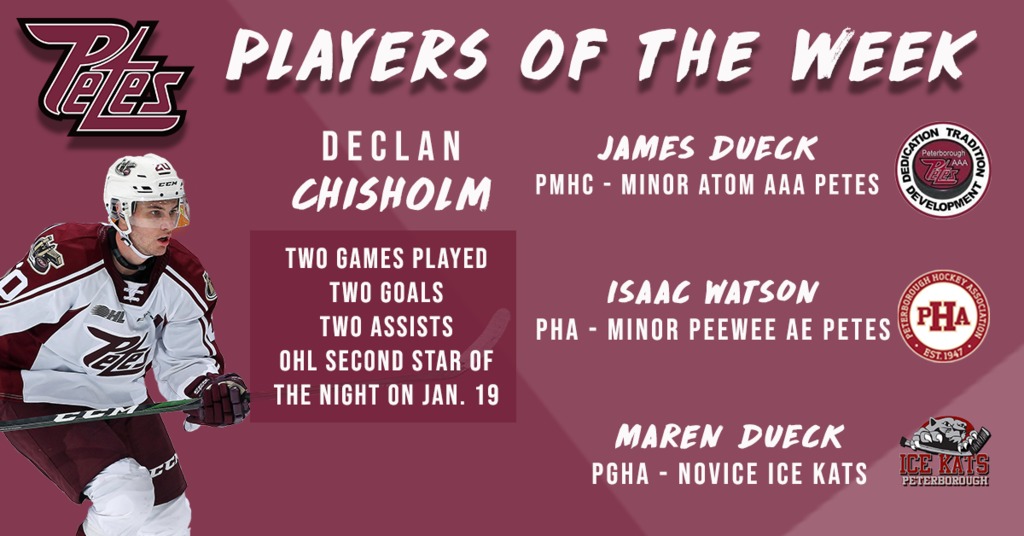 Peterborough Petes Player of the Week: Declan Chisholm
Chisholm’s two goals and two assists in a 9-2 victory against the Niagara IceDogs earned him the OHL Second Star of the Night on Sunday, January 19. The Winnipeg Jets prospect tied his career-high 43 assists and has career-high 52 points. He ranks second in assists and points among OHL defencemen.

Minor Hockey Player of the Week: James Dueck (PMHC)
Dueck played two strong games recently for the Jesse’s Tap & Grill Minor Atom AAA Petes. He outhustled and was strong in front of the net helping his team defeat the North Central Predators in both games.

Minor Hockey Player of the Week: Isaac Watson (PHA)
Watson has become a leader for his Minor Peewee AE team both on and off the ice since advancing a level. He set personal goals to improve his skill level on the ice and to become a complete player making terrific strides in the first half of the season. As the second half gets underway, he looks to be a key leader as the team heads into the playoffs.

Minor Hockey Player of the Week: Maren Dueck (PGHA)
Last game against Ennismore, Dueck scored on a breakaway to help her Novice Green Ice Kats get back into the game. Still in her first year, Dueck’s enthusiasm is recognized by her teammates, coaching staff and parents as she competes hard for the puck and has shown great dedication this season.