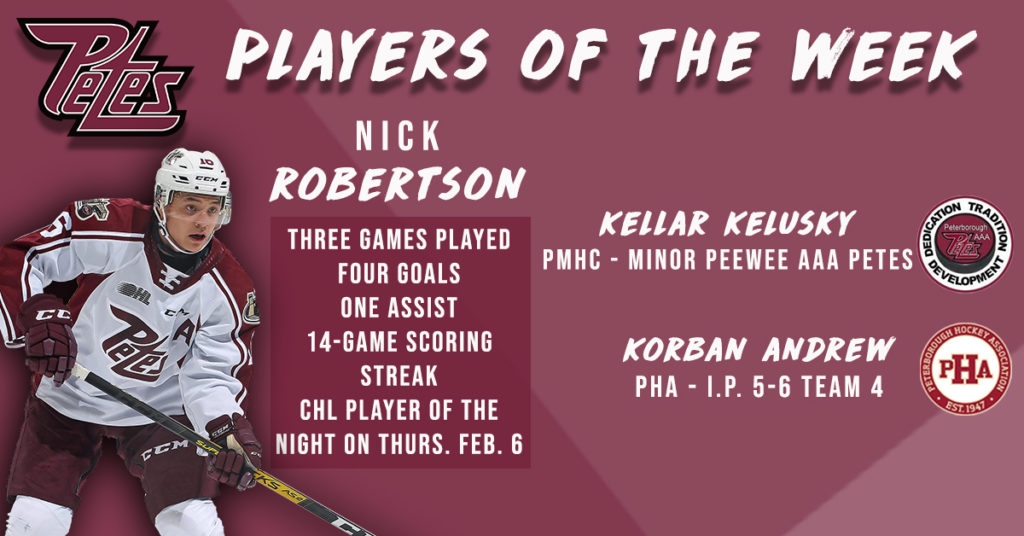 Peterborough Petes Player of the Week: Nick Robertson
Robertson’s four goals in three games extended his goal streak to 14 games. The Toronto Maple Leafs prospect’s two goals, including the game winner and a short-handed goal, on Thursday, February 6 in an 8-3 victory against North Bay earned Robertson CHL Player Of The Night honours. With 42 goals in 37 games, Robertson ranks second in the OHL in goals.

Minor Hockey Player of the Week: Kellar Kelusky (PMHC)
Kelusky is described as a hard-working, motivated player who brings energy and has a smile on his face every time he’s at the rink. He is a positive influence in the dressing room, a great teammate and is known for his competitiveness on the ice. He recently scored the game-winning goal as his Minor Peewee AAA Petes shut out the Quinte Red Devils 1-0 on Sunday, February 2.

Minor Hockey Player of the Week: Korban Andrew (PHA)
Battling a high fever all week didn’t slow down Andrew as he participated in his team’s first jamboree on February 1st and 2nd with his teammates. He’s described as a leader in the dressing room and on the ice, therefore, he participated in the mini-game in honour of his friend’s mother, Rebecca Turner, at the Petes Annual 11th Pink In The Rink on Saturday, February 1.