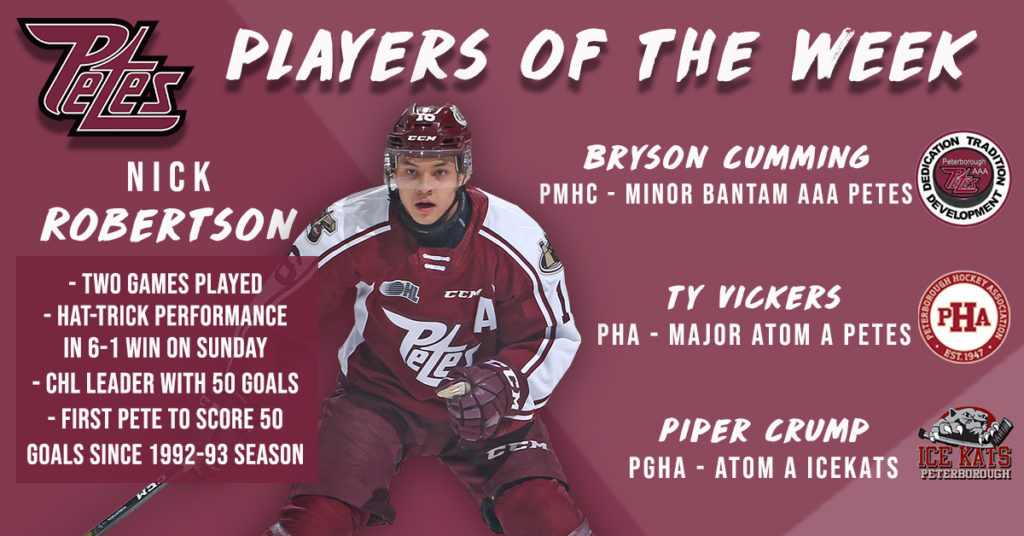 Peterborough Petes Player of the Week: Nick Robertson
Robertson’s hat-trick performance in a 6-1 win against the Barrie Colts made him the first Pete to score 50 goals since Jason Dawe (58) and Mike Harding (54) reached the milestone in the 1992-93 season. Robertson leads the Canadian Hockey League with 50 goals, an accomplishment that took him only 43 games. He was honoured the second star on Sunday’s OHL Three Stars of the night and was the game’s first star.

Minor Hockey Player of the Week: Ty Vickers (PHA)
Vickers has been stellar as the starting goalie for the Major Atom A Petes while his goalie partner recovers from an injury. Vicker has been keeping the puck of out the net in order to keep the games close. Parents and teammates say that he’s been playing ‘lights out hockey’.

Minor Hockey Player of the Week: Piper Crump (PGHA)
Crump’s offense has been one of the factors that has helped the Atom A IceKats dominate in the playoffs. She scored a goal and registered two assists in a 2-0 series win over Scarborough. She continued to contribute offensively against Central York by scoring the tying goal in game one on Saturday and notching the game winning goal in a 1-0 win on Sunday.