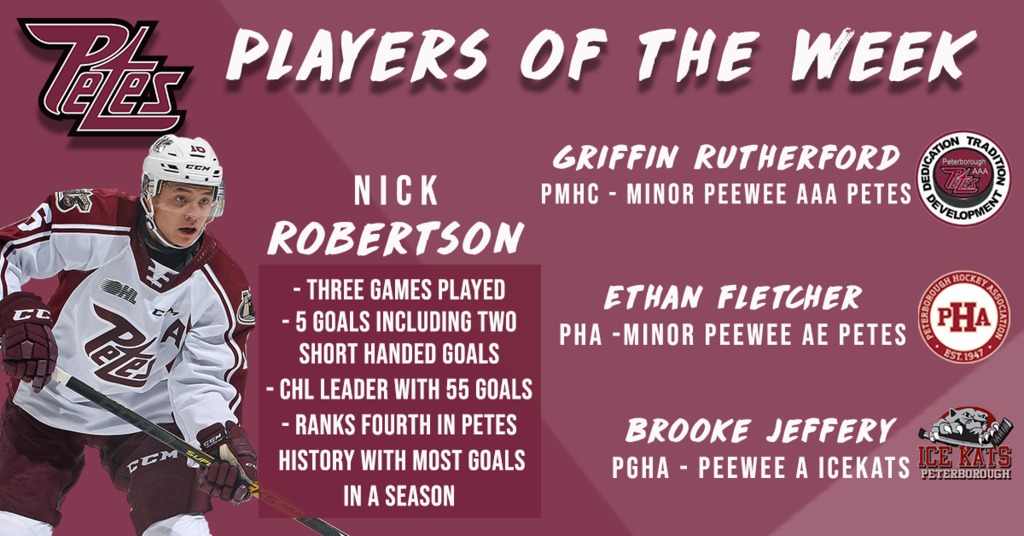 Peterborough Petes Player of the Week: Nick Robertson
Robertson built off of last week’s success and registered 10 points (5 goals, 5 assists) in three games. He scored the insurance goal in Thursday’s 8-0 win against the Hamilton Bulldogs and registered two goals and two assists in a 5-1 win against the Mississauga Steelheads, including setting up Akil Thomas’ game winning goal. Robertson added three assists and scored two shorthanded goals in Sunday’s 12-1 win over the Niagara IceDogs, which ranks him fourth in Petes history for goals in a single season with 55.

Minor Hockey Player of the Week: Griffin Rutherford (PMHC)
Rutherford’s hard work ethic paid off after he scored the 1-0 overtime game-winning goal to advance the Fitzsimmons Towing Minor Peewee AAA Petes to the OMHA semi-finals. He’s described as being calm under pressure and a strong hockey player who is thriving in his first AAA season.

Minor Hockey Player of the Week: Ethan Fletcher (PHA)
Fletcher’s willingness to learn and work on the ice paid off when he returned from injury. He hasn’t missed a step and contributed on the ice as the Minor Peewee AE Petes skated to eliminate Belleville in the first round of the Lakeshore League playoffs. While he was injured, he was strong, supportive and encouraged his teammates while taking stats for the coaches.

Minor Hockey Player of the Week: Brooke Jeffery (PGHA)
Jeffery’s positive attitude and hard work ethic help lead the Peewee A Ice Kats in points at the Bolts and Hearts Tournament in Durham West. She scored five goals and had one or two assists per game. As a team player, she strives to make good passes and makes her teammates on the ice better players.