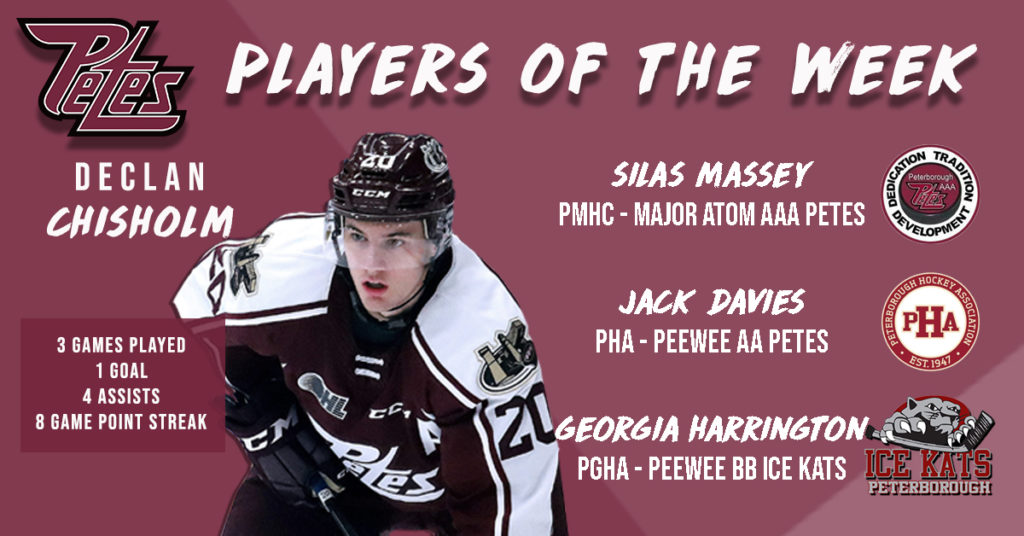 Peterborough Petes Player of the Week: Declan Chisholm
Chisholm registered two assists as the Petes shutout the Spirit 4-0 on Wednesday and he continued to show his offensive ability as he assisted on Liam Kirk’s first goal in a 6-3 win on Friday against the Sting. On Saturday, the Winnipeg Jets prospect registered his first goal of the season and assisted on Zach Gallant’s goal to extend his point streak to eight games as the Petes lost 6-2 to the Firebirds as they wrapped up their six game road trip.

Minor Hockey Player of the Week: Silas Massey (PMHC)
Massey is one of two goalies that stops the pucks for the Major Atom AAA Petes. His hard work ethic and backstopping abilities has kept them in and even won a few games. Massey works hard in practice and finds new ways to stay competitive.

Minor Hockey Player of the Week: Jack Davies (PHA)
Davies was voted as team captain as he leads his Peewee AA Petes. He makes his teammates feel welcome and ensures there’s strong communication on and off the ice between parents, teammates and coaching staff.

Minor Hockey Player of the Week: Georgia Harrington (PGHA)
Harrington is described as a leader on the team with her upbeat and positive attitude on the Peewee BB Ice Kats. She helps her teammates focus and set personal goals. Harrington tries her hardest in practice and in games, and is an attentive listener when her coaches give her feedback to improve on the ice.