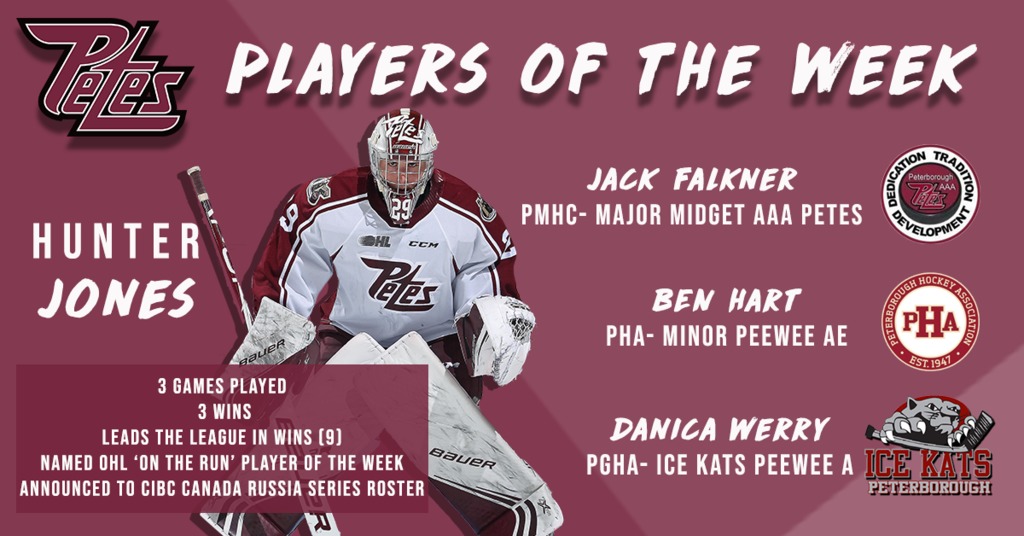 Peterborough Petes Player of the Week: Hunter Jones
Goaltender Hunter Jones stood tall as the Petes defeated the Hamilton Bulldogs 4-3 in last week’s Home Opener. He continued his strong play against two of the CHL’s top ten teams, allowing one goal in each game against the Ottawa 67’s and Oshawa Generals. He finished the weekend with three wins, a 1.67 goals against average, and 0.943 save percentage. The Minnesota Wild prospect is first in the OHL with nine wins on the season, and last week was named to the 2019 CIBC Canada Russia Series roster.

Minor Hockey Player of the Week: Jack Falkner (PMHC)
Falkner is considered a dynamic two-way centre for the Major Midget AAA Petes. His countless faceoff wins and defensive plays have been excellent. In 7 games, Falkner has 6 points and is sued in numerous key situations.

Minor Hockey Player of the Week: Ben Hart (PHA)
Hart presents strong leadership skills on and off the ice with his Minor Peewee AE Petes teammates. He has had a strong start to the season and capped off the week with a 4 point nights, recording 2 goals and 2 assists against North Durham in a 6-1 victory.

Minor Hockey Player of the Week: Danica Werry (PGHA)
Werry is a strong leader and sets a high standard of skating, stick handling, and shooting techniques for the Peewee A Ice Kats. On Sunday, Werry ended the Clarington Applefest Tournament with 2 goals and 5 assists for a total of 7 points as her team won gold.