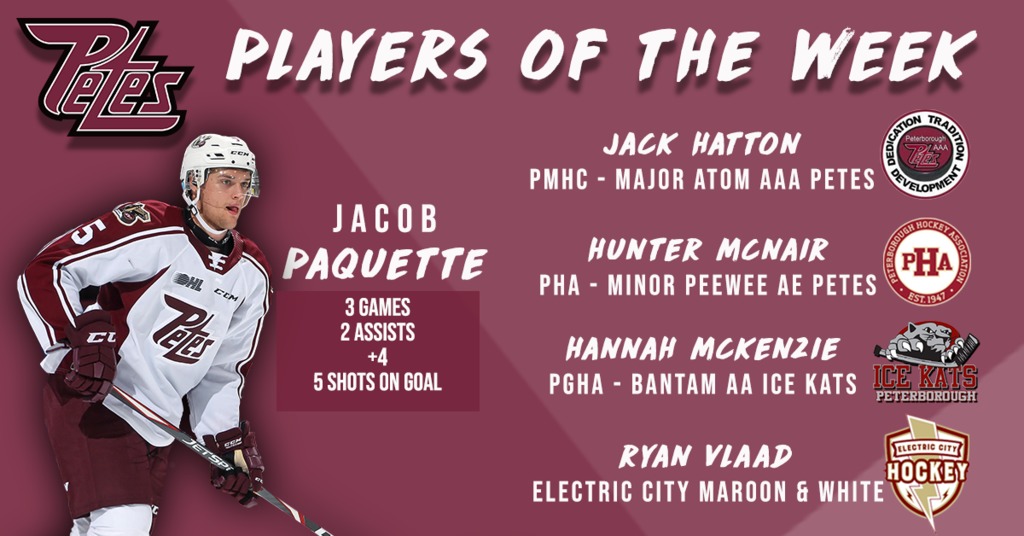 Peterborough Petes Player of the Week: Jacob Paquette
Paquette’s defensive play, responsibility in his own zone, and physical presence earns him this week’s honours. In a strong performance in Sunday’s 8-3 win over the North Bay Battalion, Paquette recorded two assists, a +2 plus/minus rating, and two shots on goal.

Minor Hockey Player of the Week: Jack Hatton (PMHC)
Hatton is described as a great teammate that is willing to assist anyone on his Major Atom AAA Petes team. He made the transition from playing defence to forward and scored his first goal of the season in his second game in his new position.

Minor Hockey Player of the Week: Hunter McNair (PHA)
McNair had a strong weekend defensively as he helped the Minor Peewee AE Petes make the semi-finals in the Oshawa Cup Tournament. His first goal of the season came in the final game of the round robin, advancing the team to the semi-finals.

Minor Hockey Player of the Week: Hannah McKenzie (PGHA)
McKenzie is a goaltender for the Bantam AA Ice Kats who works hard on and off the ice. Her hard work is reflected in her performance, having allowed just one goal and recording three shutouts in her last four games.

Minor Hockey Player of the Week: Ryan Vlaad (Special Needs Hockey)
Vlaad’s greatest strength is going into the corners to grab a loose puck to set up plays for his Electric City Maroon and White teammates. His smile, energy, and positive attitude haven’t gone unnoticed to many people in his fourth year of playing hockey.