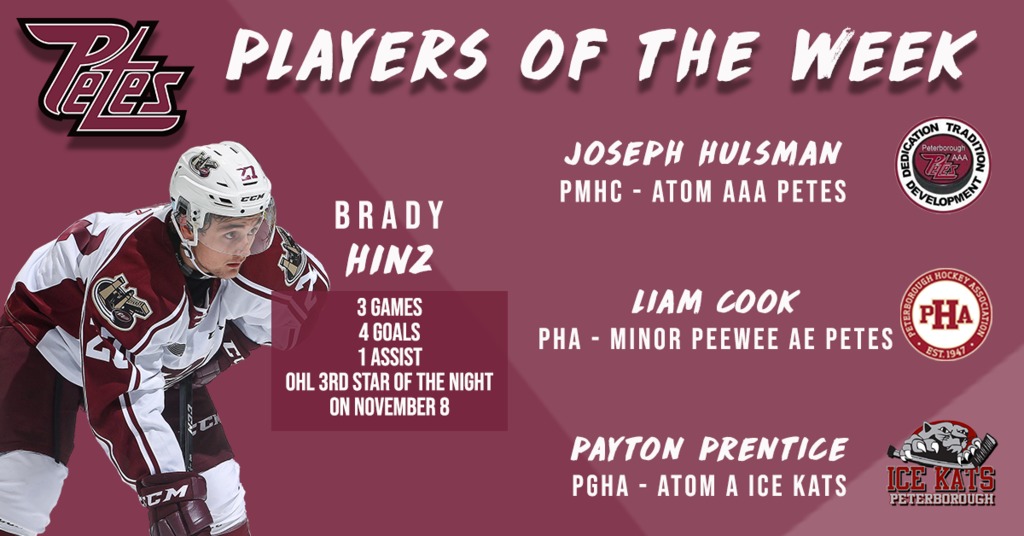 Peterborough Petes Player of the Week: Brady Hinz
Hinz scored the game tying and game winning goals in a 5-3 Petes win over the Kingston Frontenacs at the PMC on Tuesday, November 5. He followed up with a three-point performance on Friday, November 8 when the Maroon and White visited the same Frontenacs. His two goals and assist on the game winner earned him the OHL’s Third Star of the Night for Friday.

Minor Hockey Player of the Week: Joseph Hulsman (PMHC)
Hulsman is a skilled defenceman who always carries his positive attitude on and off the ice. His smile is contagious on the Atom AAA Petes team, while his teammates and coaches say he’s a pleasure to be around.

Minor Hockey Player of the Week: Payton Prentice (PGHA)
Prentice has been a persistent force for the Atom A Ice Kats. She works hard on the ice and sets an example for her teammates. She shined off the ice when celebrating her tenth birthday with a skating party with her friends, family, and teammates that raised $1,225.75 for the PRHC Mombassadors program which funds lifesaving equipment for the Neonatal Intensive Care Unit.