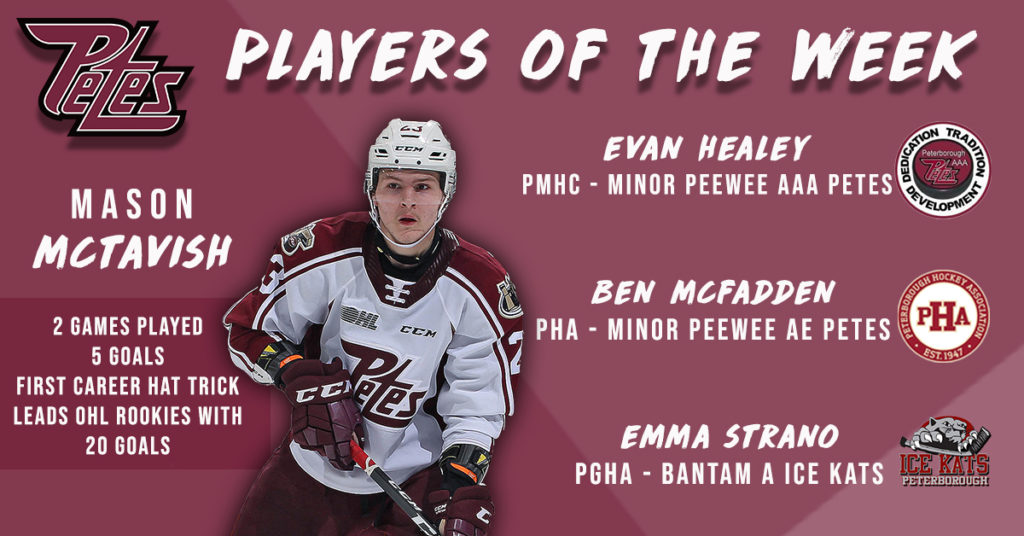 Peterborough Petes Player of the Week: Mason McTavish
McTavish leads all rookies in the Ontario Hockey League with 20 goals after registering five goals in two games. McTavish received CHL Player of the Night honours when he registered his first career hat trick in a 7-4 win against the Hamilton Bulldogs on December 12. His two-goal performance earned him the second star in the OHL’s Three Stars of the Night in Friday’s 3-2 win against the rival Oshawa Generals.

Minor Hockey Player of the Week: Evan Healey (PMHC)
Healey always arrives at the rink with a great smile and an amazing attitude. His hard work on the ice transitions into being supportive and encouraging his teammates in the Minor Peewee AAA dressing room.

Minor Hockey Player of the Week: Ben McFadden (PHA)
McFadden has evolved into a leader on his Minor Peewee AE team. His strong defensive play on the blue line made it hard for Belleville and Oshawa forwards to play against.

Minor Hockey Player of the Week: Emma Strano (PGHA)
Strano is described as a positive teammate who looks out for her Bantam A Ice Kats team. Her commitment and dedication in practice, dryland and games has been recognized by coaches, teammates, and parents. Her positive and hard-working effort transitions onto the ice as Strano led her team in points, registering five goals in three games in a recent tournament.