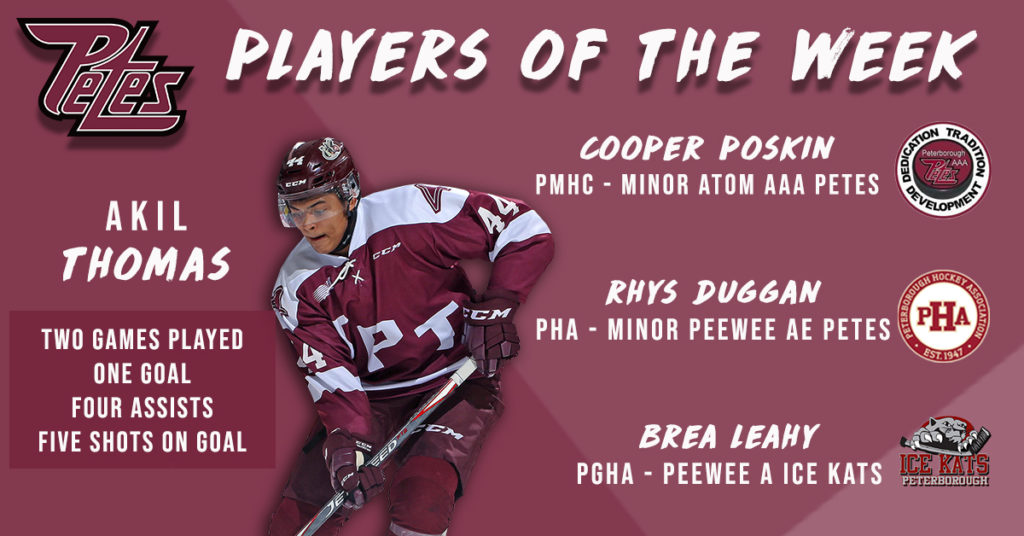 Peterborough Petes Player of the Week: Akil Thomas
Thomas has registered five points in two games since being acquired on Thursday, January 9. He received the primary assist on Nick Robertson’s game-winning goal to end the Ottawa 67’s 17-game winning streak in his first game as a Pete on Saturday night. Thomas scored his first goal in Maroon and White and added three assists in a 6-4 road loss against the rival Oshawa Generals on Sunday.

Minor Hockey Player of the Week: Cooper Poskin (PMHC)
Poskin pushes himself to work hard each and every time he takes the ice with his Minor Atom AAA Petes team. He has performed strong defensive play over the first half of the season and looks to improve in the second half.

Minor Hockey Player of the Week: Rhys Duggan (PHA)
Duggan recently recorded a four-point game during the Hespeler tournament on the Minor Peewee AE team. His performance reflected off his willingness to learn and improvement on his skills. Duggan has become a true leader on and off the ice which will help his team gear up for the playoffs.

Minor Hockey Player of the Week: Brea Leahy (PGHA)
Leahy has been a sensational goaltender for her Peewee A Ice Kats as the team currently holds a 22-2-3 record. Earlier this season, a string of injuries to the Bantam A goalies had given Leahy an opportunity to be called up to play for the Bantam A Ice Kats, where she played with confidence to make huge saves in her phenomenal performance.