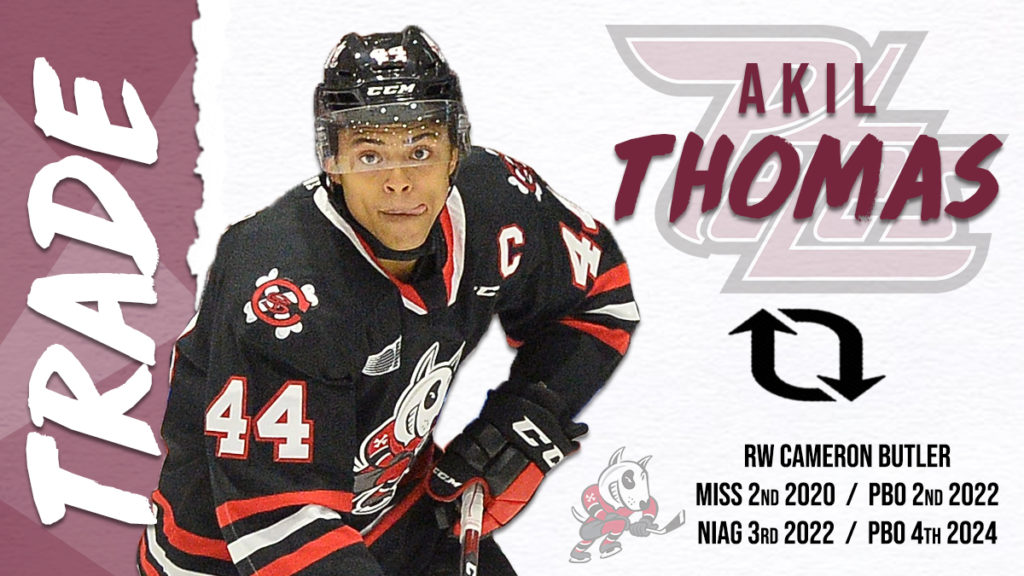 Thomas, a 2000-born centre, was selected in the second round, 51st overall by the LA Kings in the 2018 NHL Entry Draft and signed a three-year, entry-level contract with the club in March 2019.

Thomas comes to Peterborough having just competed with Canada’s National Junior Team at the 2020 IIHF World Junior Championship where he scored the game winning goal to help Canada capture their 18th gold medal in World Junior history. He also appeared on the international stage for Canada at the 2018 World U18 Championship, 2017 Hlinka Gretzky Cup, and 2016 World Under-17 Hockey Challenge.

The Brandon, Florida native, who is a dual American-Canadian citizen, is in his fourth OHL season. He was originally selected by the IceDogs in the first round, 12th overall in the 2016 OHL Priority Selection. The 6’0”, 180 lbs playmaker has recorded 96 goals, 179 assists, and 275 points in 219 games with Niagara, including 15 goals, 29 assists, and 44 points in 27 games as IceDogs captain this season.

“We’re really excited to be adding a player of Akil’s calibre – he’s a player with a high level of skill that plays a 200-foot game,” commented Oke. “He is capable of playing in all situations, has played in big games, and comes through in big moments. He’ll be heavily counted on in Peterborough as we move forward in the second half and into the postseason.”

In the deal, Niagara acquires 2002-born forward Cameron Butler and the following picks:

“We felt that this move was an important step to take in order to put our organization in the best position to achieve our short- and long-term goals,” noted Oke.

“We know that in order to acquire a good player you have to give up a good player, and we’ve given up a good player in Cam Butler,” Oke continued. “On behalf of the entire Petes organization and Peterborough community, we’d like to thank Cam for his dedication to the team and this community. We know that he’ll have great opportunities in Niagara to develop his game further this season and beyond.”

Thomas will not dress for Peterborough’s game against Owen Sound on Thursday night, but is expected to be in the lineup on Saturday when the Petes host the Ottawa 67’s.

Tickets for Saturday and all regular season home games are available (while supplies last) through the PMC Grant Thornton Box Office in person and over the phone at (705) 743-3561 Monday to Friday from 9:30am to 5:00pm, and 24 hours a day online.

Now is the time for Petes fans to use their Holiday Flex Packs. If you have yet to get your hands on this great package – which includes 4 ticket vouchers for any January home game, two Petes mugs, and an autographed program for $59.99 – contact the Petes office at 705-743-3681 or visit The Petes Store.