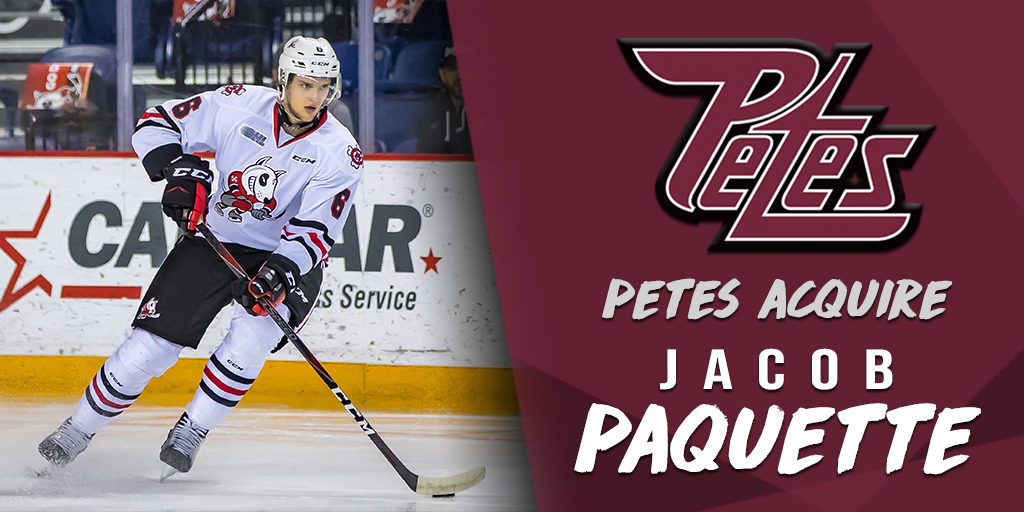 Paquette, a 1999-born blue liner, was selected in 2nd round, 31st overall by the Kingston Frontenacs in the 2015 OHL Priority Selection. The 6’3”, 216lbs Ottawa native has registered 12 goals, 53 assists, 65 points, 136 penalty minutes, and a +56 plus/minus rating in 237 regular season games split between the Frontenacs and IceDogs.

Selected by the Nashville Predators in the 7th round, 216th overall in the 2017 NHL Entry Draft, Paquette recently returned from the Columbus Blue Jackets’ rookie camp to which he received a free agent invite.

“We’re excited to add a player of Jacob’s calibre to our hockey club,” commented Oke. “He’s been a key part of two deep playoff runs over the last couple of seasons. That experience will be a great asset to our group and will add depth to our defence corps.”

Paquette is expected to be in the lineup when the Petes face his former club for the final two games of the Petes Pre-Season presented by CIBC Wood Gundy Peterborough. On Friday, September 13 at 7:30pm, Peterborough will visit the Niagara IceDogs in Lincoln. They’ll face the same IceDogs on Saturday, September 14 at 7:05pm at the new Cavan Monaghan Community Centre in Millbrook.

Single game tickets for all regular season games are now on sale at the PMC Grant Thornton Box office in person, by phone at (705) 743-3561, or online. To view the Petes’ full schedule, click here.