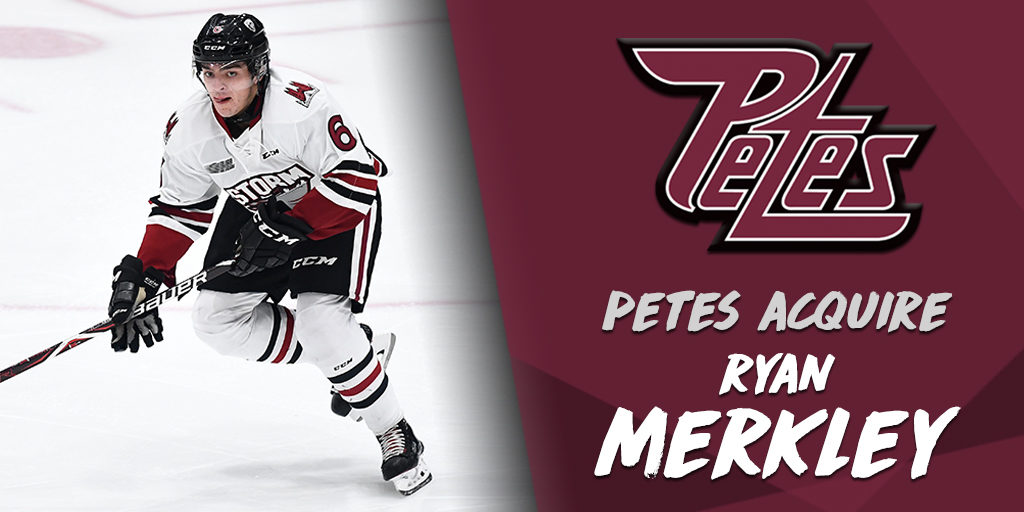 Merkley, a 2000-born defenceman, was selected in the first round, 21st overall by the San Jose Sharks in the 2018 NHL Entry Draft and signed a three-year, entry-level contract with the club in July.

The #SJSharks select Ryan Merkley in the first round of the 2018 #NHLDraft.#SharksDraft pic.twitter.com/1lyMqqHOw6

The Mississauga native is in his third OHL season. He was originally selected first overall by the Storm in the 2016 OHL Priority Selection. The 5’11”, 163lbs rearguard has recorded 30 goals, 131 assists, and 161 points in 153 games with Guelph, including 5 goals, 34 assists, and 39 points this season.

The 2016-17 OHL Rookie of the Year represented Canada at the 2018 IIHF U18 World Championship (fifth place), the 2017 Ivan Hlinka Tournament (gold), the World Under-17 Hockey Challenge (Canada Red; silver), and the 2016 Youth Olympic Games (silver). He won the Jack Ferguson award as the first overall pick in the OHL Priority Selection.

“In Ryan we’re acquiring an elite-level defenceman that has excellent offensive abilities,” commented Oke. “We look forward to him joining our group.”

In the deal, Guelph acquires 2000-born forward Pavel Gogolev and the following picks:

“To acquire a good player, you have to give up a good player,” Oke added. “We thank Pavel for the contributions he has made in Peterborough, and wish him nothing but the best as he moves forward.”

Merkley is expected to be in the lineup when the Petes host the Ottawa 67’s on Sunday, December 16 at 2:05pm.  Fans can meet him during the free post-game skate with the Petes after Sunday’s game (helmets and skates required). Tickets for Sunday’s game are available through the PMC Collins Barrow Box Office in person and over the phone Monday to Friday from 9:30am to 5:00pm, and 24 hours a day online.

Enter promo code WelcomeRyan in the Lansdowne Place My Rewards section of the Petes app to earn loyalty reward points. Want to hear about more Petes contests and promotions? Join thousands of fans and stay up to date with the Petes by downloading the Peterborough Petes Mobile App, available for iPhone or Android devices.