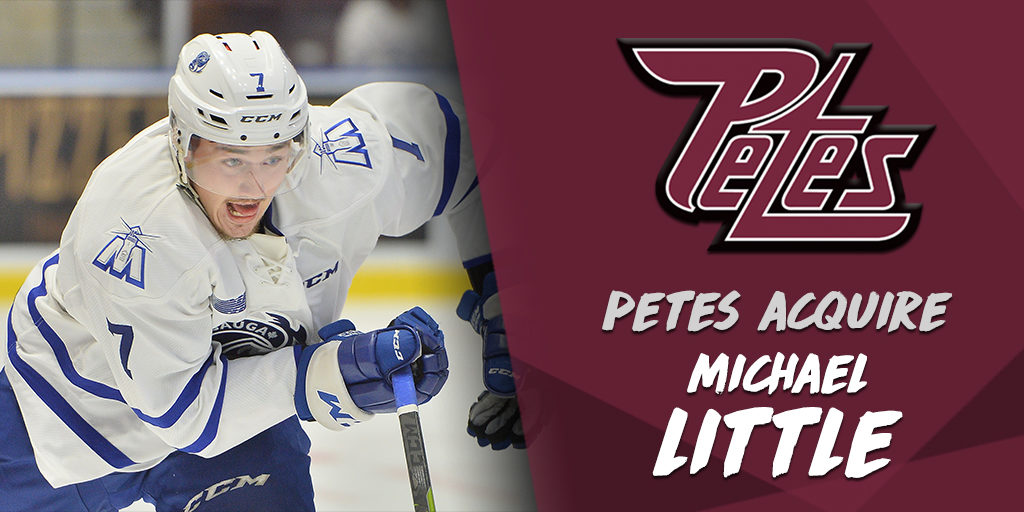 “In Michael we’re acquiring an energetic and highly competitive player,” commented Oke. “He is strong on the forecheck and on his skates, and likes to be physical. We’re excited to add him to our group.”

The Petes also acquire a conditional sixth round OHL Priority Selection pick in 2023 from the Steelheads.

Little is expected to be in the lineup when the Petes host the Oshawa Generals tonight at 7:05pm. Tickets are available through the Collins Barrow Box Office in person, over the phone at (705) 743-3561, and online.

In the deal, Mississauga acquires 1999-born forward Nick Isaacson and Owen Sound’s third round pick in the 2019 OHL Priority Selection.

“We thank Nick for the contributions he has made in Peterborough over the past three years and wish him nothing but the best as he moves forward in Mississauga,” Oke added.

In an additional roster move, forward Jake Partridge has been released from the club.

Enter promo code WelcomeMichael in the Lansdowne Place My Rewards section of the Petes app to earn loyalty reward points. Want to hear about more Petes contests and promotions? Join thousands of fans and stay up to date with the Petes by downloading the Peterborough Petes Mobile App, available for iPhone or Android devices.