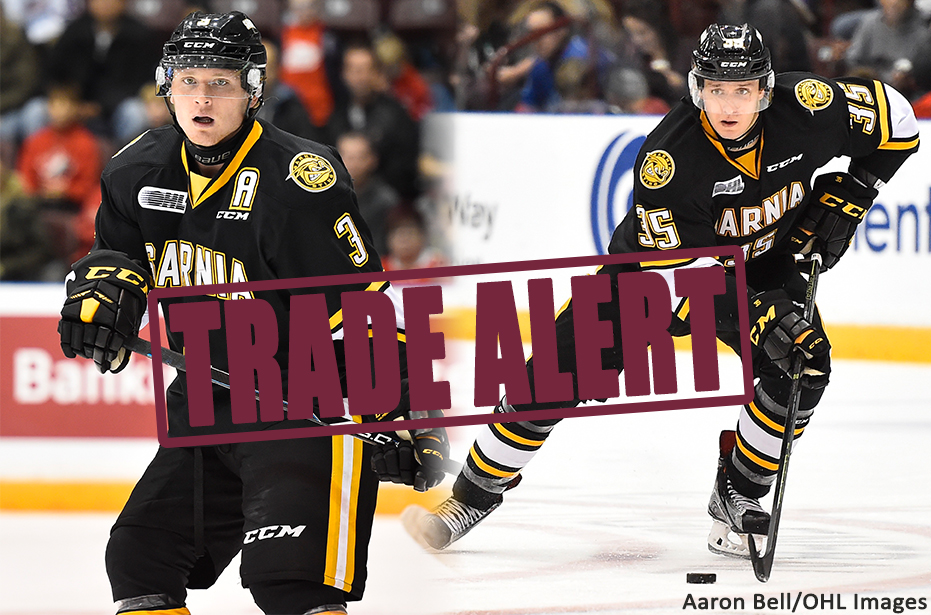 Korostelev, a 1997-born winger originally from Moscow, Russia, has scored 17 goals and 18 assists for 35 points in 31 games played this season. The Toronto Maple Leafs prospect (7th round, 185th overall, 2015) is among the OHL league-leaders with 7 powerplay goals, and has scored a combined 81 goals and 87 assists for 168 points in 199 OHL games.

“Nikita is highly effective player who combines creativity, stickhandling, and impressive puck work to provide high quality scoring chances for himself and his teammates,” noted Oke. “He has a good shot and is also a dynamic forechecker who is willing and able to play a physical game.”

Black, a Kitchener, Ontario native, has been patrolling the blue line for the Sting for three seasons. The steady, 1997-born defenceman has registered 6 goals and 20 assists for 26 points in 156 OHL games, and has served as Assistant Captain for the Sting for the past two seasons.

“Alex has earned tremendous respect from both teammates and opponents for his work ethic on and off the ice. He leads by example and is expected to play a key role for our club moving forward.”

“The Petes would like to thank Nick for his commitment to the Petes organization, and to bettering the Peterborough community with his involvement in volunteer initiatives,” commented Oke. “We wish him well in Sarnia and hope he enjoys success with the Sting and at the upcoming NHL Draft.”

The Petes would like to thank Nick Grima for his outstanding commitment to our organization and the Peterborough community. #Stud pic.twitter.com/BJCVaEAeyH

The Petes, who have won ten straight games, play on Sunday, January 1 at 7:05pm against the Hamilton Bulldogs. Tickets are available here for the game, and don’t forget to download the free Peterborough Petes Mobile App powered by Kawartha TV & Stereo, available for iPhone or Android devices.