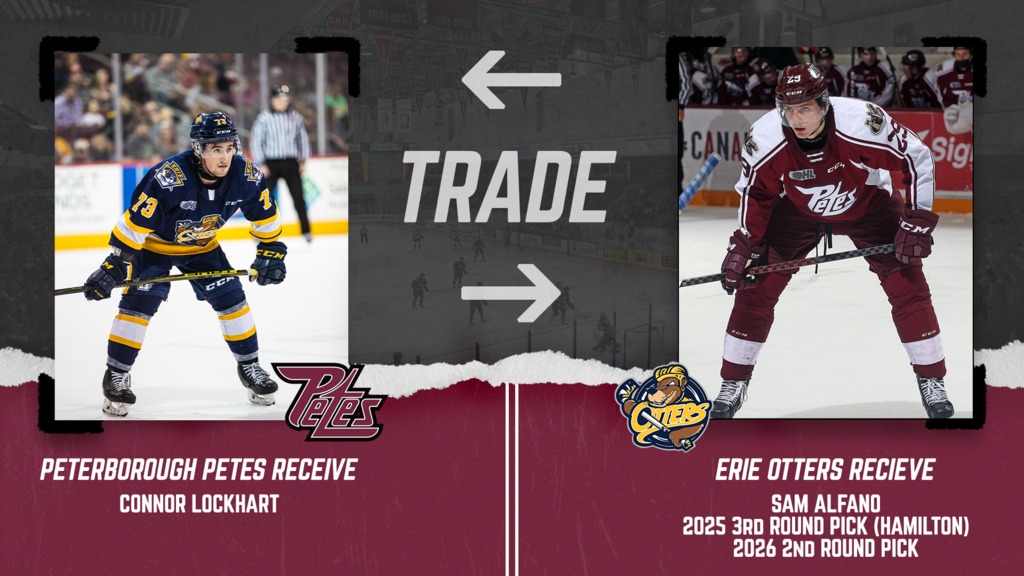 General Manager Michael Oke announced today that the team has acquired Vancouver Canucks prospect Connor Lockhart from the Erie Otters in exchange for Sam Alfano, Hamilton’s third round pick in the 2025 OHL Priority Selection, and Peterborough’s second round pick in 2026.

The 5’9”, 160lbs forward was Erie’s first round, third overall pick in the 2019 OHL Priority Selection. He served as Alternate Captain for Team Ontario at the Canada Winter Games in 2018-19, and also represented Canada in the World U-17 Hockey Challenge (Team Red, 2019-20).

“Connor was a player we were very high on during his OHL draft year, and we have been following his progress closely since then,” commented Oke. “We look forward to the opportunity to have Connor contribute on the ice, in the locker room, and in the community here in Peterborough, as he brings a strong veteran presence to the Petes.”

“In order to get a good player you need to give up a good player, and although losing someone like Sam is never ideal, we think this move benefits everyone involved,” continued Oke. “We thank Sam for his work in all areas of our community and our organization; from his on-ice contributions to his work with organizations like Hockey Gives Blood, Sam is both a strong athlete and a strong human being. We wish him all the best next year and beyond.”

Petes Season Tickets are now on sale for the 2022-23 Petes season, starting at just $299+HST. Season Ticket Members get access to all benefits and perks, for the lowest price. Season tickets are available only while supplies last. To reserve seats, call (705) 743-3681 ext. 6000 or email tickets@gopetesgo.com.