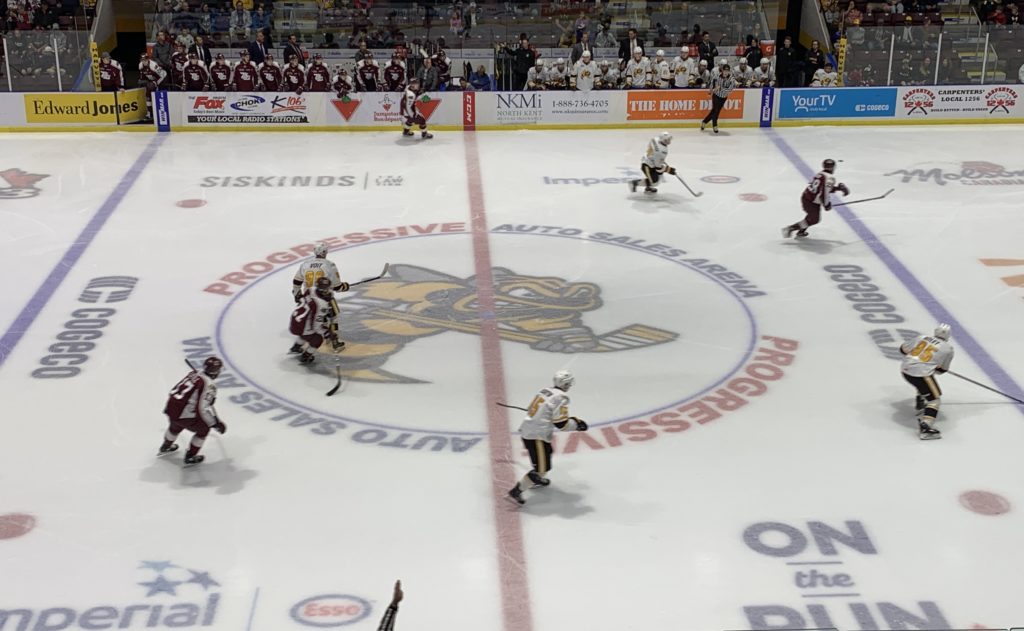 The Peterborough Petes improved to a 6-2-0-0 road and season record with a hard fought 6-3 win over the struggling Sting in Sarnia on Friday night, winning three straight for the first time in the 2019-20 campaign.

The game’s opening goal came in the midst of a Petes line change that saw Liam Kirk and Dustin Hutton together in Sarnia’s end, along with Declan Chisholm. Chisholm slid the puck to Hutton then on to Kirk for the Arizona Coyotes prospect to put away his sixth goal of the season, 3:38 into the game.

Sarnia’s Sean Josling would respond at 9:00 after Brayden Guy found him alone on the doorstep with a wide open cage, beating Hunter Jones to tie the game at 2.

After spending a few games apart, the line of Kirk, Nick Robertson, and Semyon Der-Arguchintsev was reunited in the Imperial City. Like they’d never been apart, the trio of NHL prospects connected to restore Peterborough’s one goal lead as Robertson became the first in the OHL to reach the double digit goal mark.

ROBBY! Make it goals in eight straight for @nickrob2001 with assists to – you guessed it – @kirky_1424 and SDA! We’re ahead 2-1!#GoPetesGo pic.twitter.com/ByruIIQ5K1

Despite being ahead by just one goal, the Petes were seemingly in charge of the contest after 20 minutes.

Ethan Langevin, Sarnia’s netminder, continued to turn away shots to keep his teammates in the game. After a flurry of action in Sarnia’s end, the Sting evened the score at 2 as Peterborough native Calvin Martin’s rebound off of Jones’ right pad Theo Hill.

The clubs exchanged power play opportunities toward the end of the stanza but neither could convert on the man advantage, sending them to their respective dressing rooms tied through 40 minutes of play.

Alright, so we may or may not have jinxed that whole ‘tie’ thing 😆

Things got worse before they got better for the Maroon and White, as Sarnia scored again to take their first and only lead of the game, 3-2, 4:31 into the third. After a near chance in Sarnia’s end, the Sting broke out on a three on one, seeing their leading scorer Jacob Perreault feed Brayden Guy to send the puck trickling past Jones.

Brady Hinz, who was acquired by the Petes from the sting on January 8, 2018 netted the game winner after a handful of chances throughout the match, with John Parker-Jones and Hutton collecting assists.

Mason McTavish added some insurance on Peterborough’s third straight win with his sixth of his rookie campaign after converting a Zach Gallant rebound.

And one for @nickrob2001, too! Chalk up assist number three of the night for SDA. 6-3 Petes!#GoPetesGo https://t.co/eiAMPPrypS

Final shots were 46-29 in favour of the Lift Lock Lads who also dominated in the face off circle, winning 65% of their draws. Jones has now won all six of his starts this season.

The Petes have one more road game in Flint on Saturday, October 12 at 7:00pm before finally returning to Peterborough for their home opener on Thursday, October 17 at 7:05 against the Hamilton Bulldogs. Catch the Petes in early season action on home ice with a Season Starter Pack and save over $65 on tickets and merchandise by clicking here.