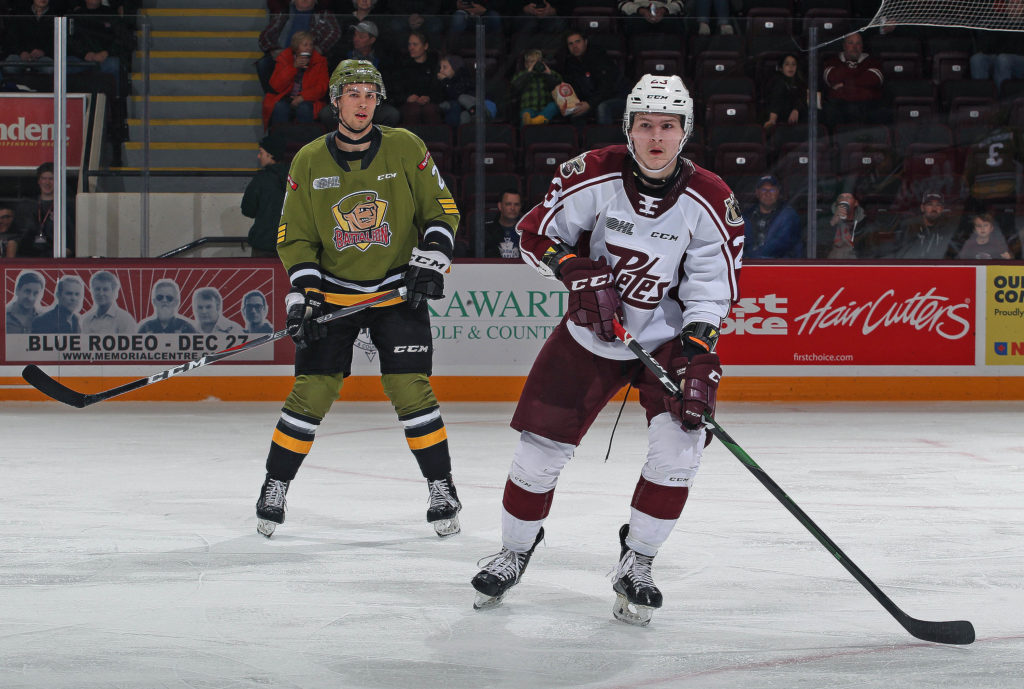 Mason McTavish is back. McTavish, the third overall pick in the 2021 NHL draft, will suit up in maroon and white as he and the Peterborough Petes line up against the North Bay Battalion on Thursday night at the Peterborough Memorial Centre.

McTavish recorded three points (2 goals and 1 assist) and a +3 rating in nine games with the Anaheim Ducks in his nine games on the West Coast. He was officially reassigned to Peterborough by Anaheim on Nov. 20.

“It’s exciting to have Mason rejoin the team,” said General Manager Michael Oke. “He’ll be a great addition to our roster and we are looking forward to working with him to continue his development.”

McTavish thrives playing against North Bay. He registered six goals and one assist in the teams’ three meetings during the 2019-20 season. Five of those points (4 goals and 1 assist) occurred in two home games. McTavish’s offensive instincts combined with his skills and now NHL experience, makes him dangerous anytime he is on the ice.

The Petes overpowered the Ottawa 67’s last Sunday to take a decisive 9-3 victory. Tucker Robertson had a monster six-point game (1 goal and 5 assists) while Emmett Sproule recorded one goal and three assists to extend his point streak to 17 games. J. R. Avon and Joe Carroll each tallied three points. Tye Austin posted his first win since returning from injury. Additionally, seven other Petes added their names to the score sheet. Overall, it was a great night to be Pete.

The Petes can only be encouraged by their recent play plus the return of McTavish as they face a squad that has had their number all season. The Battalion took each of the previous two contests between Peterborough and North Bay thus far.

With McTavish in the lineup, the Petes are 3-0 against the Battalion and have outscored them 19-6. The fifth overall pick in the 2019 OHL Priority Selection will bolster a team that includes offensive weapons. Sproule is turning a trade into a steal with 27 points on the year and a 17 game point streak stretching back to his first game as a Pete.

Avon, who has recorded at least two points in four straight games. is one point shy of reaching 20 and Carroll is two points away from hitting the same mark. Nick Lardis, the Petes’ first round draft choice of the 2021 OHL Priority Selection, has accumulated 14 points in 17 games. Samuel Mayer, drafted 15th overall in the 2020 OHL Priority Selection, has 11 points across 17 games in his first OHL season.

Peterborough intend to lock down North Bay’s playmaker Brandon Coe. Coe leads the Battalion in points with nine goals and 24 assists. He usually sets up players like Kyle Jackson, Matvey Petrov, and Mitchell Russell. The trio combine for 46% of the club’s total goals scored. Petrov leads the way with 15 as Jackson and Russell have 11 and 10, respectively.

X-FACTOR:
Forward Mason McTavish
The best player on the ice Thursday night might dictate the game entirely. His speed and skill level is already highly touted, but the impressive numbers anytime he faces North Bay speak for themselves. He can light the lamp on Thursday night at the Centre for the first time in 21 months.

Fans, it’s not too late to see the third overall pick of the 2021 NHL Draft! Click the link below for tickets.