Petes Battle Back to Overtake Generals in Game 3 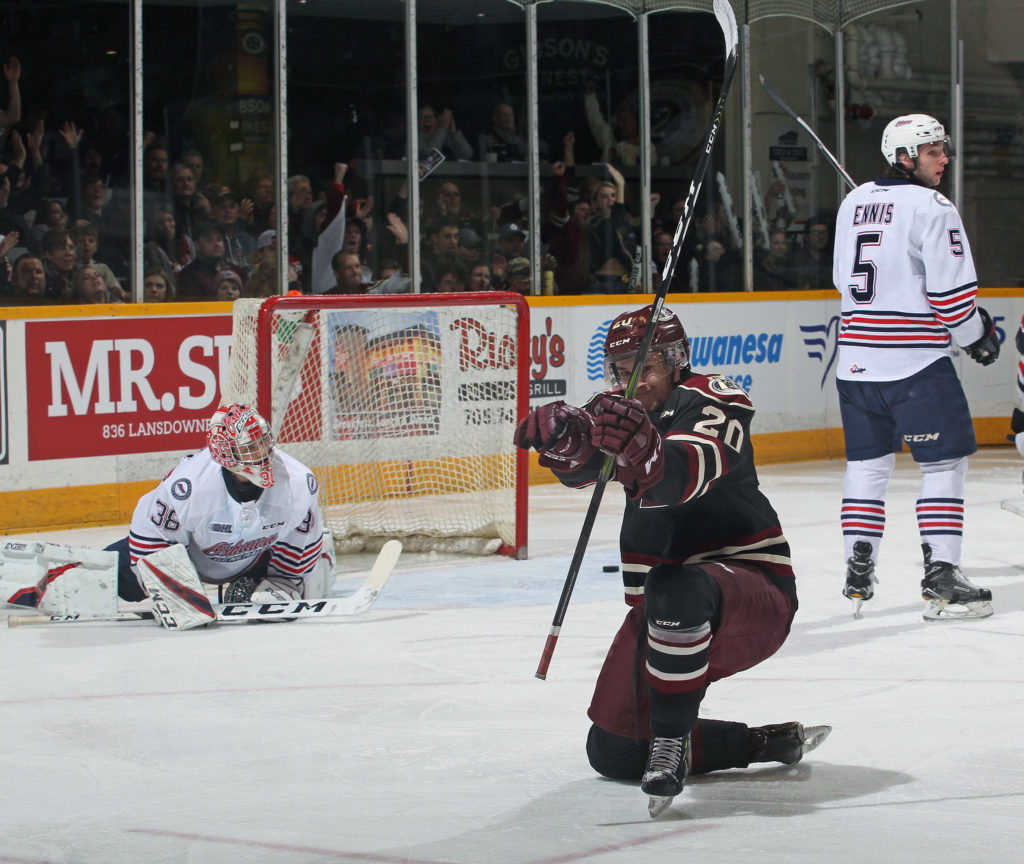 The Eastern Conference Quarter-Final had found its way to Peterborough for Game 3 as the Petes looked to rebound from their two losses in Oshawa and finally make a mark on the series. They would do just that with a 3-2 victory in front of 3,638 fans on Tuesday night, cutting Oshawa’s series lead to 2-1.

The visitors were the first to get on the board at only 19:27. Anthony Salinitri found Brandon Saigeon who was able to send a pass to Allan McShane which he deposited behind Hunter Jones to open the scoring for Oshawa.

Minutes later the opposition added another tally to their lead with a strong blast from Nicolas Mattinen to make it 2-0 Gens with an assist from Kyle Bollers.

The Petes would quickly retaliate and were able to catch Kyle Keyser off guard, resulting in a Declan Chisholm rocket courtesy of the combined efforts of Chris Paquette and Cole Fraser to drop the Oshawa lead to a single goal.

CHIZ!! @chis_decs says thank you very much and rips home the shot! The Petes are back within one goal!#GoPetesGo pic.twitter.com/yO2cJlP9Y0

The period would come to a close with the Generals up by one as they held the shots on goal by a narrow margin.

Not exactly the start we wanted, but the boys finished the period strong! The Petes trail by one goal after 20 minutes.#GoPetesGo pic.twitter.com/Bm4Hx9NZQL

The Maroon and White rallied with 11:17 on the clock in the second frame and were able to tie the score at 2 thanks to a Nick Robertson lightning bolt to Adam Timleck which was further powered by the stick of Semyon Der-Arguchintsev, allowing  Timleck to score his first of this post-season.

TIMMER!! What a beautiful tip from @AdamTimleck. @nickrob2001 and SDA get the assists on the goal and the Petes have tied the hockey game!#GoPetesGo pic.twitter.com/n7OhoLjHFO

The second frame would end on a 2-2 tie with Oshawa still in control of the shot clock 22-21.

2 periods down, 2 goals each. Should be a fun final 20!#GoPetesGo pic.twitter.com/AifFKM0pVB

It would take until the tenth minute of the third period before the next goal would be scored. The Lift Lock Lads would take control of the scoreboard with a rip from Paquette for his second of the postseason. Both Chisholm and Liam Kirk would be credited with the assists to bring the Petes into the lead 3-2.

PAQ!!! @Chris_paquette9 shoots the puck and it trickles past Keyser and in! @kirky_1424 and @chis_decs get the assists and your Petes have a 3-2 lead with just over 10 minutes remaining!#GoPetesGo pic.twitter.com/0QZaLI57p0

The final period would end with Keyser pulled, although it would not be much use as the Petes took Game 3 3-2, dropping the Generals series lead to a single game.

Final shots were 37-29 in favour of the Petes

The three stars respectively were Chisholm of the Petes, Jones of the Petes, and Keyser of the Generals, with the Mark’s Hardest Working Player of the Game awarded to Paquette.

Petes Season Ticket Members are reminded that tickets for home game two (series game four) are included in their season ticket package. They are encouraged to pre-authorize payment for subsequent games and rounds through the playoff pre-authorization process. Season ticket members should contact Mike Kosciesza at (705) 743-3681 ext. 263 or by email with any questions regarding pre-authorization.

alumni Jimmy Johnston
You Should Be Cheering for the Dallas Stars . . . Here's Why
5 hours ago