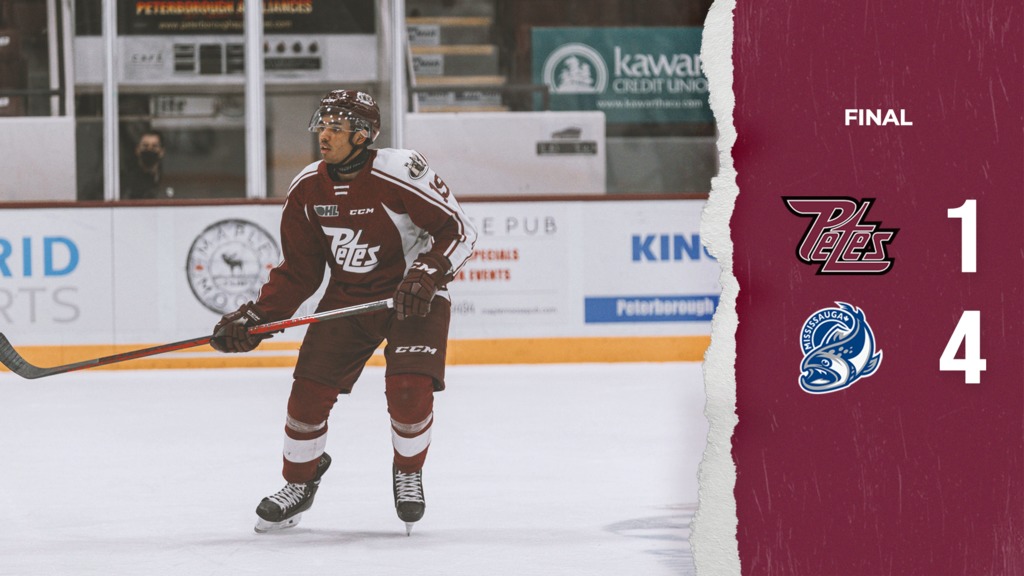 A night that started out so well at the Peterborough Memorial Centre for the Petes ended with the Mississauga Steelheads on top, 4-1. Chase Stillman registered his 11th goal of the season and his second as a Pete while Emmett Sproule and J.R. Avon extended their point streaks to three games.

Stillman deflected a puck above Roman Basran right shoulder to break the ice 90 seconds into regulation. Petes leading scorer Emmett Sproule set up the tip by sending the puck to the front of the net. Samuel Mayer recorded the secondary assist.

SCORING UPDATE: Chase Stillman is now credited with this goal, marking his 11th of the season and 2nd as a Pete!#GoPetesGo https://t.co/aZGuQSqG3j

Mississauga retaliated with a short handed goal off the stick of Zander Veccia. After a miscue in the Petes zone, Steelheads forward Owen Beck corralled the rubber for a 2-on-1 rush. His shot was blocked by Michael Simpson, but Beck tapped the rebound behind the outstretched netminder for an easy tap-in tally for Veccia.

Both teams dinged pucks off posts in the first 20 minutes. Simpson blocked 14 of 15 shots faced.

The second period saw less open ice. However, Mississauga’s Ethan Del Mastro scored next to put the Steelheads on top. Mississauga shot a puck toward Simpson that went wide and Del Mastro was able to wrap the puck around before anyone realized what happened. It was Del Mastro’s fifth goal of the season and second point in two straight games.

The Petes’ offence was limited during the middle frame, but they generated high danger scoring chances. One of the best occurred on a 3-on-2 break nearly halfway through the period.

As Peterborough entered the third period, Mississauga retained their one-goal edge. The mighty maroon and white came out with speed, creating more odd-man rushes for the majority of the first 10 minutes.

Mississauga capitalized on a power play opportunity at 6:48 of the period, extending their lead to 3-1. Luke Misa passed the puck directly into Kai Schwindt’s wheelhouse in the high slot for a one-timer.

In a bold move, Peterborough Head Coach Rob Wilson pulled Simpson with more than four minutes remaining in regulation. However, Veccia scored for the second time tonight with the net empty to seal the 4-1 win.

Simpson played strong between the pipes, making 34 saves on 37 shots.