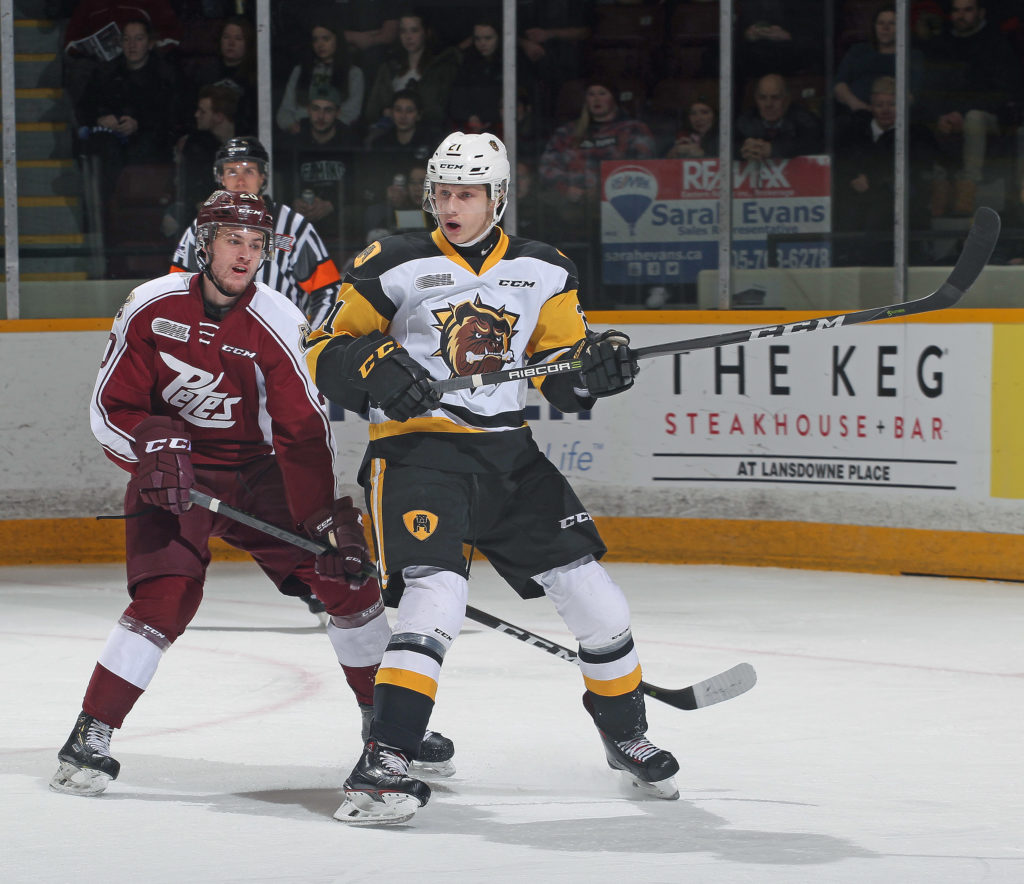 A rocky start in Hamilton was quickly resurrected on Friday night as the Petes skated to a 5-3 win over the Bulldogs for their third straight victory and second in as many nights.

It certainly wasn’t the beginning the Petes were hoping for as two of the league’s top scorers connected to get things going early for the Bulldogs. After picking up a drop pass from Liam Van Loon, Jan Jenik sent a shot from the point toward Arthur Kaliyev who redirected the puck past Hunter Jones just 7 seconds into the game.

It took a few minutes, but Liam Kirk responded for the Maroon and White mid-way through the frame with the 13th goal of his sophomore campaign. Hudson Wilson found Kirk streaking through the neutral zone to end him on a breakaway, seeing the Brit deposit the puck behind Zachary Roy to tie the game at 1 at 10:48. J.R. Avon also assisted on the play.

Declan Chisholm added his fourth of the year to give the Petes their first lead of the game while on a late 5-on-3 man advantage. Kirk sent the puck behind the net to Semyon Der-Arguchintsev who, after evaluating his options, sent the puck to a hailing Chisholm. The Winnipeg Jets prospect’s shot beat Roy with 27 seconds left in the stanza.

Shots and face offs were even after 20, but the Petes held the lead where it mattered most.

🆙 by 1⃣ after 2⃣0⃣! A good response from your Petes after going down early.#GoPetesGo pic.twitter.com/zn097g3X5p

Much like in the opening 20, the Bulldogs went to work early in the middle frame. Kaliyev and Jenik connected again, but this time it was for latter hitting the net. Kaliyev forced a turnover in neutral territory and sent Jenik on a shorthanded breakaway to tie the game at 2, 47 seconds after the start of the second.

The Petes answered back with two tallies through the mid-way point of the match.

Rookie Tucker Robertson netted his fourth of the season with help from fellow first year Keegan McMullen who made a nice chip play to get the puck to his teammate for Peterborough’s third of the night.

TUCKS! @McMulley17 chips the puck up to @Robertson_62 who finds the far side of the set to beat Roy! 3-2 Petes!#GoPetesGo pic.twitter.com/cITKzlNhEa

Less than two minutes later, Kirk put away his second of the evening and 14th of the year off a rebound, with Wilson and Der-Arguchintsev both picking up their second helpers on the eventual game winner.

A handful of penalties were handed out in the latter part of the period, but didn’t have an effect on Peterborough’s 4-2 after 40 minutes of play.

Doubled up over the ‘Dogs after 40 minutes!

FUN FACT: With 2 assists so far tonight, @hudson_wilson18 has recorded back-to-back multi-point games for the first time in his OHL career. He has 2 assists in 3 of his last 4 games.#GoPetesGo pic.twitter.com/rshBu5cHBO

The division rivals exchanged third period goals, both on the power play.

Captain Zach Gallant extended his team’s lead to 5-2, tipping Chisholm’s blue line blast past Roy at 9:02. Der-Arguchintsev collected his third assist of the game on the insurance marker.

Tag Bertuzzi would be credited with a goal to bring his club within two goals of the lead a few moments later, but it would be as close as the Bulldogs would get to catching the piping hot Petes who have earned 9 of 10 possible points in their last 5 games.

Final shots were 33-27 for the Lift Lock Lads, with Jones making 24 saves in his 16th victory of the season.

The Petes will wrap up their weekend against the Otters when they travel to Erie for the only time this season on Saturday, November 30 at 7:00pm.

Peterborough returns to home ice on Thursday, December 5 to welcome the London Knights at 7:05 pm for Teddy Bear Toss night.