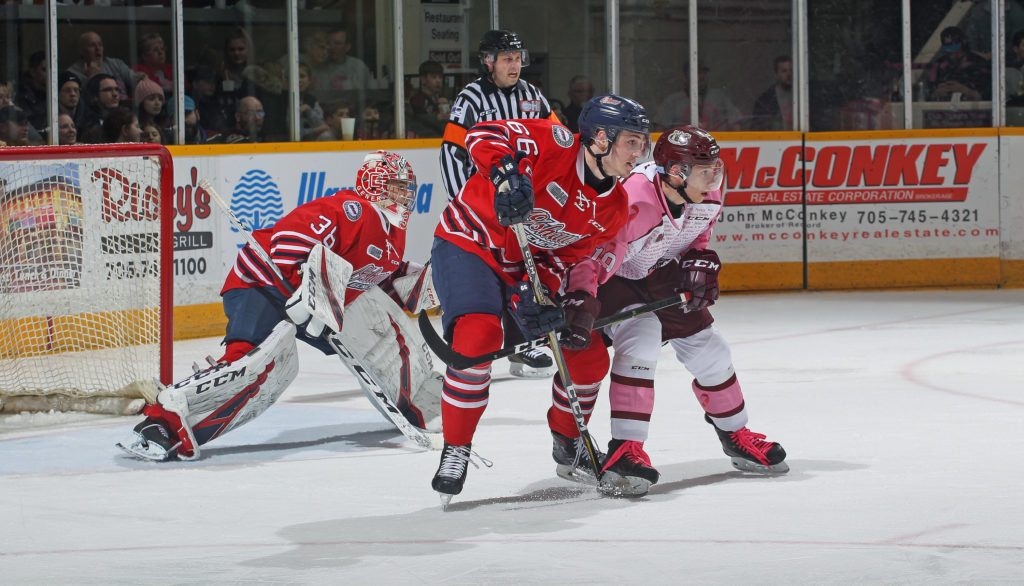 The Petes hosted Oshawa for the second time in two days, on an evening that celebrated the 10th Annual Pink in the Rink event hosted by the Canadian Cancer Society. Following a touching tribute to those who had been diagnosed with cancer, the Petes took to the ice looking to avenge their significant loss to the Generals the night before, but unfortunately it was the Generals who ended up on top once again at 6-3.

The Petes opened the score early in the first as Liam Kirk found a hole in Kyle Keyser and with the assistance of Brady Hinz and Peterborough native Quinn Hanna was able to tip in the puck.

The Generals tied it with under three minutes remaining thanks to a shot from Brandon Saigeon who found support from Anthony Salinitri and fellow former Bulldog Nicolas Mattinen, leaving the score 1-1.

At the end of twenty each team registered a point and tied for shots 9-9.

Oshawa’s Allan McShane and Danil Antropov both respectively added to the board in the opening of the second period, giving the visitors their second lead of the night at 3-1.  McShane found the puck from captain Kyle MacLean and Giovanni Vallati, and Nico Gross earned the apple on Antropov’s.

With 8:25 on the clock the Petes returned the score within one when a cross-ice pass from Nick Robertson connected with Chris Paquette who promptly potted it behind Keyser for his twenty-seventh of the season.

Moments after Paquette scored the Generals added another point to their lead with Cole Resnick undressing the defence and dropping the puck into the Petes net. Assists went to Dylan Robinson and Tyler Tullio.

After forty minutes the teams would leave the ice with the ‘Shwa up 4-2 and sitting on top of a 21-19 shot differential.

The first goal in the third came from a Petes stick bringing the maroon and pink back within one as Paquette pocketed his second of the night from a feed off Ryan Merkley and Robertson.

Furthering the Gens score, Mattinen fired himself towards the net where he was met by a pass from Antropov and Brett Neumann which was quickly deposited into the mesh for a 5-3 Oshawa lead.

The final goal would be an Oshawa empty net tally from Saigeon after Hunter Jones was pulled. Pink in the Rink would end with a 6-3 Oshawa victory, their second in two nights.

At the end of the night inal shots were 32–28 in favour of the Petes .

Antropov, Paquette, and Keyser were named the first, second, and third stars of the game, with Kirk named the Mark’s Hardest Working Player of the Game.