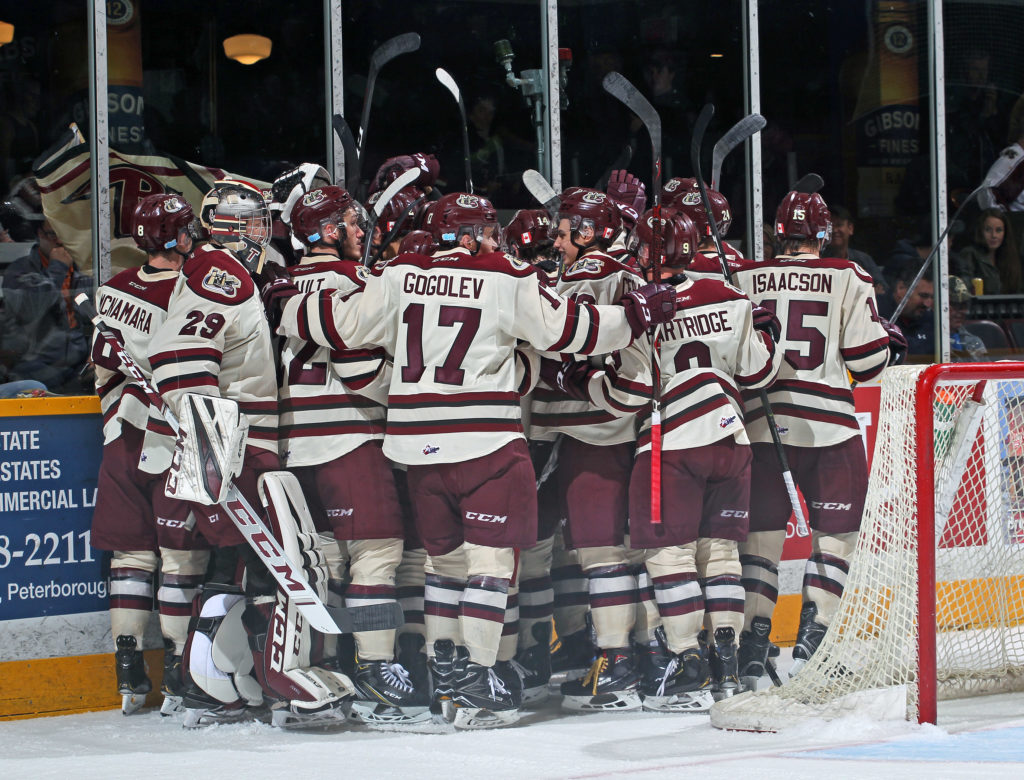 Coming off a strong weekend of three consecutive wins, the Petes returned to PMC  looking to stretch the streak to four as they faced the North Bay Battalion on the inaugural Girls Hockey Night. With a number of minor girls hockey teams and two CWHL players in attendance, the Petes would go on to wipe out the Battalion 4-1 and gain that coveted fourth straight win.

With very little of note occurring, it would appear that a quiet first 20 minutes would come to an end with nothing more than North Bay in charge of the shot clock by a high margin until Brady Hinz, assisted by Cole Fraser and Declan Chisholm, fired the puck in the direction of Christian Propp and netted Peterborough’s first of the night to give the Petes the early lead.

Before Propp could recover from Hinz’s rocket, he was surprised by the second of the night courtesy of Semyon Der-Arguchintsev with a helper from Adam Timleck, planting the home team with a firm 2-0 lead as the period came to a close.

SAMMY! @MapleLeafs prospect SDA takes a slick feed from @AdamTimleck and blasts the puck past Propp! @nickrob2001 picks up a helper, too. 2-0 Petes!#GoPetesGo pic.twitter.com/5rxYBUkyDm

The teams would go to the dressing rooms after 20 with North Bay holding a slim 14-10 lead on the shot clock.

The Peterborough lead was broken 13 minutes into the second period as Adam McMaster scored unassisted to bring the Troops within one.

With 8 minutes remaining, the Lift Lock Lads regained their lead as Erik Cermak and Austin Osmanski were credited with assisting Cameron Butler to score the Petes’ third of the night as they increased to 3-1.

The teams headed off the ice after 40 with the Troops maintaining the advantage on the shot clock 21-19, although the Petes held a strong 3-1 lead on the scoreboard.

The final period would quietly wind itself down, until at the 4 minute mark the Petes struck again to increase their lead to 4-1 with a Cermak goal, which was assisted for their second of the night by the pair of Chisholm and Fraser.

Cermak, Jones, and McMaster were named the games first, second, and third stars, with Butler named Mark’s Hardest Working Player of the Game.

The Petes edged the Battalion 33-31 on final shots.

The Petes travel to Sudbury on Friday before returning to meet with the Bulldogs at the PMC on Thursday, December 6 at 7:05pm for Teddy Bear Toss Night. Tickets are available through the Collins Barrow Box Office in person, over the phone at (705) 743-3561, and online.